As mentioned, these sword has been long discontinued, but is preserved here for informational purposes.

The Shrewsbury was perhaps the most affordable sword ever. Or at least, as far as half decent, functional medieval swords go it was. And it was also one of the first ever reviews on SBG..

It was originally a bulk order to Windlass Steelcrafts for a movie in Europe that never eventuated, and unloaded to the general public below cost to try and recover their (bad) investment..

As such, it was a one off - an anomoly. But there was enough of them made that they lasted for nearly 2 YEARS, and were a real boon to the sword collector on a budget..!

Here, then, is that original review. In my seemingly never-ending quest to find a functional yet affordable sword, I just couldn't pass the $99USD Shrewsbury up.

Though I am primarily interested in heavy cutting swords, I wanted to try out a cut-and-thrust style sword without having to spend an arm and a leg.

The Shrewsbury appeared to be the answer...

Upon opening the cardboard box and dumping out the packing peanuts, I found the Shrewsbury covered with some sheets of heavy brown paper which were cut to the shape of the sword and stapled all around; an unusual but effective packing method. 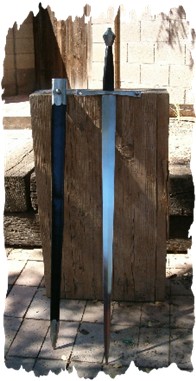 The Shrewsbury comes with a standard Windlass scabbard, which is to say, it is made of thick leather with metal locket and chape and offers adequate protection for the sword during transport and storage.

In rather typical Windlass fashion, the scabbard fits the sword fairly loosely, but it's acceptable for an affordable sword at this price point.

The Shrewsbury scabbard also comes with a brazed on frog stud on the front of the locket, which is a nice addition that isn't present on all Windlass scabbards.

The first thing that struck me about the sword was the length of the grip. In virtually every picture of this sword it appears to have a short, single-handed grip.

In reality, the grip is 6" long and in addition to the long faceted pommel offers enough room for a two-handed grip. I assumed that the grip would be wood underneath the black leather wrap; however, upon close inspection, I found that the grip core is actually made of heavy plastic.

Though not desirable from an historical perspective, the plastic core is still very tough, hard and functional. 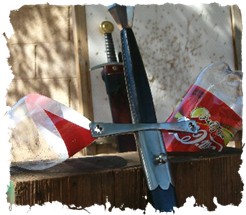 Again, on an affordable sword in this price bracket it is completely acceptable, and due to the fact that the hilt can be easily broken down, it would be relatively easy to make a hardwood grip to replace the plastic, should one desire to do so (something I plan to do to mine).

The leather covering on the grip of this affordable sword is very evenly dyed and stitched and is very attractive. It also lacks the rather slippery feel of some other Windlass grip wraps.

The hilt is secured with a capstan nut atop the pommel which threads onto the tang, allowing the hilt to be snugged down should it loosen with use. The threads are standard 5/16 by 18 pitch. At the blade shoulder the tang is a bit more than a third the width of the blade and tapers up near the pommel to the round, threaded section.

While the tang isn't a heavy duty looking monster, it seems adequate for a sword with the weight and intended use of the Shrewsbury. The cross and pommel are well cast and finished.

The only noticeable flaw in this particular blade is that the central ridge wanders a tiny bit off center near the tip; more a cosmetic flaw than anything that would affect performance. The blade exhibits a very slight distal taper. I say slight because the blade is only 1/8" thick at the guard, tapering to 1/16" at the very tip.

The Shrewsbury Sword in Use

The Shrewsbury is a surprisingly lively sword. Due to its light weight, approximately 2 lbs, close balance point of 3.5" from the guard, and long grip, it is an amazingly quick sword to use. As I said, cut-and-thrust swords are not my forte, so I can only say that the sword seems to track quite well in the thrust and is very quick in the cut.

The blade is quite flexible and can be bent out of line to a ridiculous degree and return to true, indicating a decent heat treatment. Unfortunately, the Shrewsbury with its dramatic profile taper and rather slender blade was obviously designed more for the thrust than the cut. As such, the blade is far more flexible than it ought to be...

While thrusting the sword through a thick, dense foam archery target, I could feel the blade wanting to 'fold'. The blade actually thrusts okay, though not great. Had Windlass made the blade thicker or left it a bit harder it would have been much better suited to its intended purpose.

As it is, it is just barely adequate for thrusting work, and I'm sure a true cut-and-thrust enthusiast would have even lower regard for its abilities. 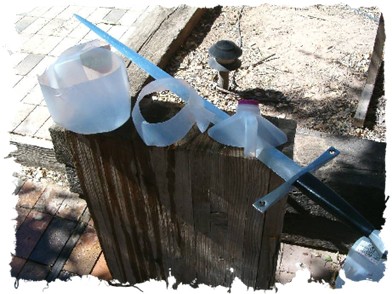 On the positive side, despite its narrow pointy blade, the Shrewsbury cuts surprisingly well. I didn't try the soaked newspaper this time around, but the sword sails easily through water filled milk jugs and 2 liter soda bottles. If you are a casual backyard cutter, the Shrewsbury, while not the ideal cutter, can still provide some cutting fun.

The sword, having a threaded nut assembly, will tend to loosen up with use, but it takes quite a while and is easily remedied with a thick piece of leather or rubber and a pair of vice grips (this is the only effective ways of gripping the round capstan nut).

Though the Shrewsbury has a very slender, elegant and almost delicate appearance, it has held up quite well over the course of many cutting sessions, with only a few turns of the vice grip to snug down the hilt. The blade has not bent and this affordable sword holds an edge well.

The Shrewsbury is a bit unusual. The sharply-tapered, narrow blade and close-to-the-hilt balance point seem perfect for thrusts, but the blade's flexibility keep it from functioning well in this manner. On the other hand, despite having handling characteristics biased toward thrusting, it actually cuts soft targets quite well.

The Shrewsbury is a fun light target cutter with modest thrusting ability and would certainly be acceptable for practicing solo, non-contact cut-and-thrust forms.

I can honestly recommend this affordable sword to those beginners who want an attractive display and/or forms practice sword at a very reasonable price, though I think that a serious student would outgrow it rather quickly.

Those looking for a serious cut-and-thrust piece should look elsewhere.

I really like handling the Shrewsbury in a practice setting as it feels wonderfully light and agile in the hand, and there's no question, it is as well fitted and finished as one can reasonably expect from cheap swords in this price range, and it is a sleek and attractive looking sword.

If it were priced at $200-300USD, I couldn't comfortably recommend it, due entirely to the overly-flexible blade; however, at its current bargain basement price, it's actually pretty nice, especially as a light duty cutter.

With a stiffer blade, I'd easily give the sword a 5 out of 5 rating. Since that isn't the case, I'd say it's a decent 'beginner's' sword.

This sword was discontinued from the start. But on occasion, similar bargains are to be had - just not on quite the same scale.

While there are always some excellent deals to be had on discontinued swords there, you can also save a further 10% off the already reduced price (effectively meaning you are buying it at a WHOLESALE price!) by using the SBG 10% Discount Coupon Code SBG2021 (or tell them the code for a phone order, 1-800-883-8838)!

I hope this information on the most affordable sword has been helpful. To return to Medieval Swords from Could This be the Most Affordable Sword?, click here.