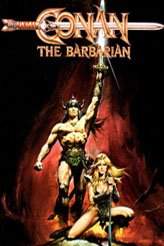 The Antediluvian Sword, also known as the Atlantean Sword, was first created by the legendary sword maker Jody Sampson and wielded by Arnold Schwarzenegger in the original classic Conan the Barbarian movies.

It has since been replicated many, many times, both officially and unofficially, by Marto, Windlass Steelcrafts & Albion just to name a few and has spawned countless variations inspired by the original fantastic design.

You can read about the various replicas around made of this sword here on SBG - but in the meantime, here is one of the very finest fully functional replicas by SBG member and sword maker extraordinaire, Jeffrey Robinson. 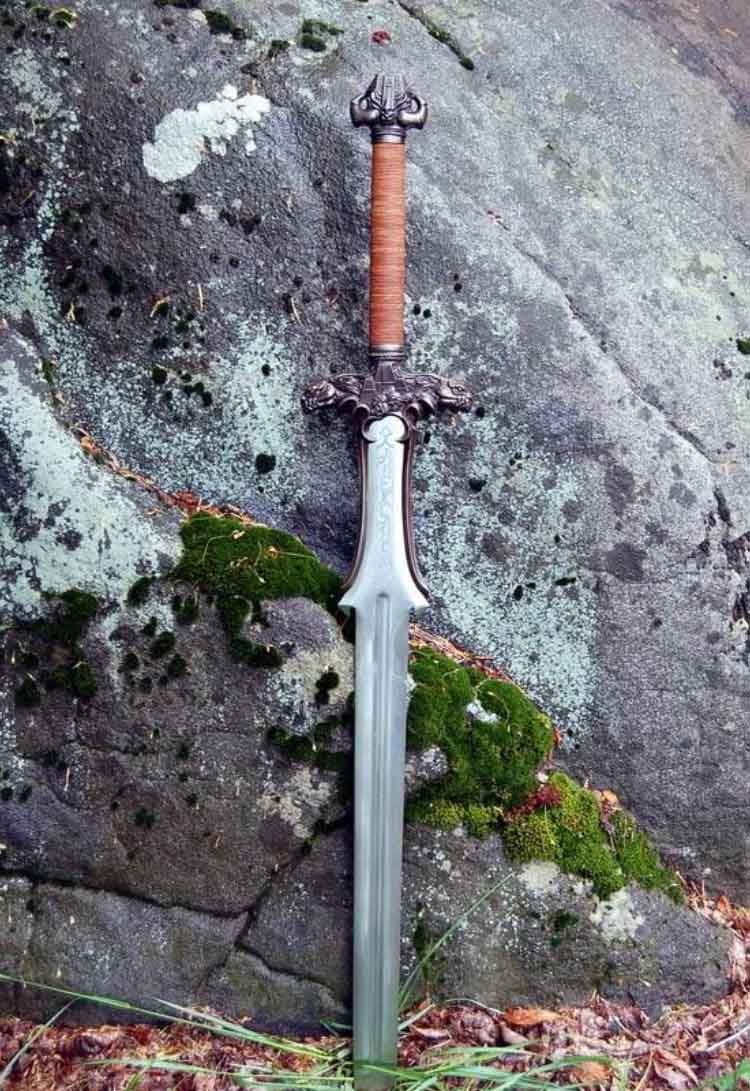 Seriously, This is the first custom sword I have ever had but it will not be my last. I have had a few custom revolvers over the years. Having something made that is just for you is very special. But even with my very positive experiences with custom revolvers they pale into insignificance to the feeling of having a custom sword. 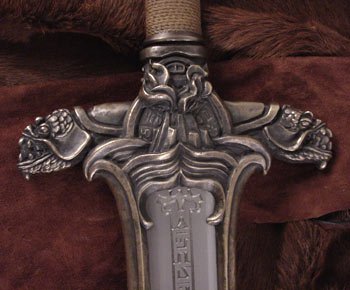 The Albion Atlantean Sword - $3248 - is considered by most to be the gold standard against which all other replicas are compared to..Click here to see images at Kult of Athena

This review is not like a typical review I guess. There is a lot of comparison to the Albion blade. I did this for two reasons, one It may help those familiar with the Albion sword understand what I am saying and two most importantly, It is that sword that I would be measuring this sword against and it is after all the inspiration for the sword.

There will be no pros or cons, after all it is a custom and my tastes may not be yours but beyond that, its eye of the beholder. This is more of a how it came to be tale and maybe a better appreciation for the talent of Jeffrey Robinson. Who beyond his talent with bronze and steel is a genuinely decent and patient person and a hell of a nice guy. During all this, no e-mail went unanswered and I did not go more then a few days without him letting me know where things stood. I recommend him without any reservations what so ever. He will get all my work hence forth.

The genesis for the sword began ten years ago when I received the number 20 Albion Atlantean. While I was ecstatic to finally hold the Conan sword I found I didn't really like the sea dog heads. The mouths bothered me in that there was no detail but filled with bronze. I know I am an ass right, here I am holding a real Atlantean and I am nit picking. Still I was very happy.

Well as fate would have it I got injured at work soon after and was without an income. It was going to take a awhile to get my financial house in order but I needed cash fast for living. So there it was a $2500 hunk of steel that I didn't need to live and I needed cash.

I sold the sword along with more then a few guns. My wife said she would make sure I would get another as soon as we were squared away. True to her word once we got the money situation worked out I got another, #167 which I bought off e-bay. The feeling of this one was no where near the same. I could not put into words but it no longer felt special.

I sold the sword a year or so later and spent it on a custom revolver. Still, the sword haunted me. If I could get something that was like the Atlantean but was mine, the way I wanted it. It was in this search that I came across Jeffrey's web page, actually it was Bredan's Fable Blade page that lead me to Jeffrey's site. I had sent Jeffrey an e-mail asking about changing the sea dog heads with serpent type heads . He said he could.

At first that was to really be the only real change to the hilt. Oh by the way Jeffrey true to his amazing talent ( which I would become more in awe of as the process went on) hit it out of the park. He sent me a picture of a wax sculpture of the Atlantean guard with a the serpent heads in place of the sea dogs. 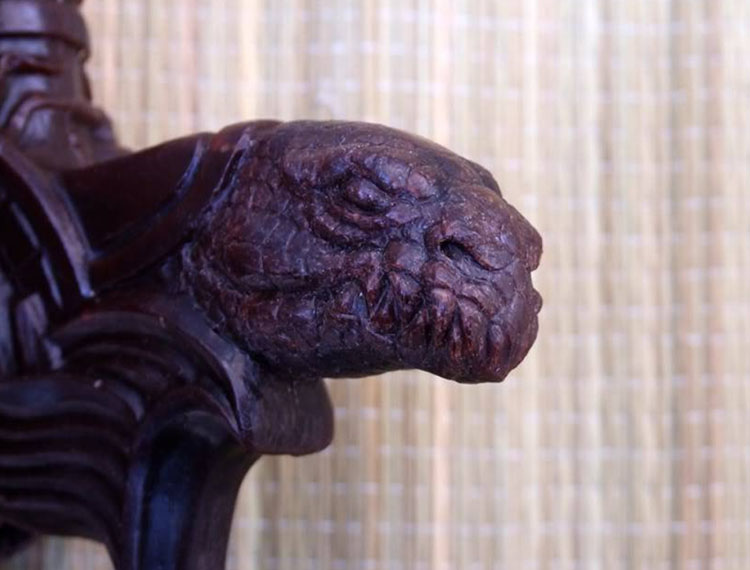 The wax casting used to make the molds

But because Albion had reacquired the license to the Conan swords. Jeffrey asked if I would be interested in making a whole new sword. Having seen what he had just done with the serpent heads along with his other work I was all for it. The sword was to be the first in a series, a replacement for the Atlantean.

Jeffrey then began to send me pictures of the progress. Each e-mail became like Christmas morning as I watched it come together. The first picture he sent me was the pommel. 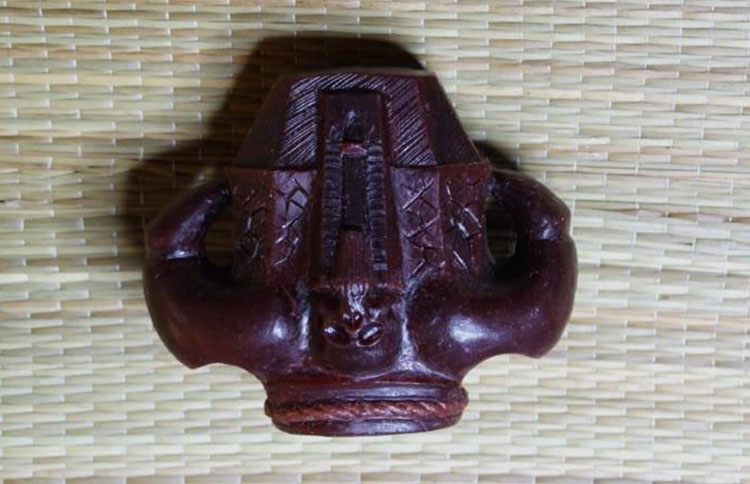 It was very close to the way it looks now with miner details changed. Another testament to his talent and vision that he knew what he wanted from the beginning. He then sent me the pictures of the new guard with the pyramids and the integrated serpent heads. 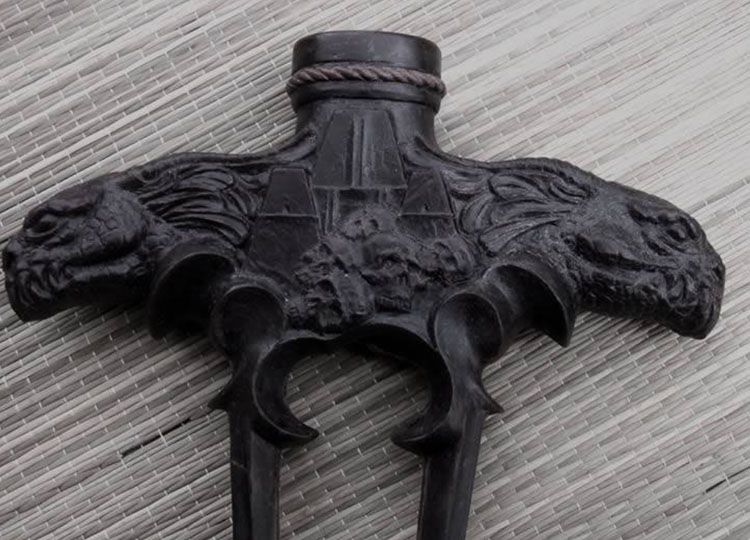 I had chosen a blade with a wider fuller, just like the way it looks. Also wanted to have the teeth at the end of the langets. 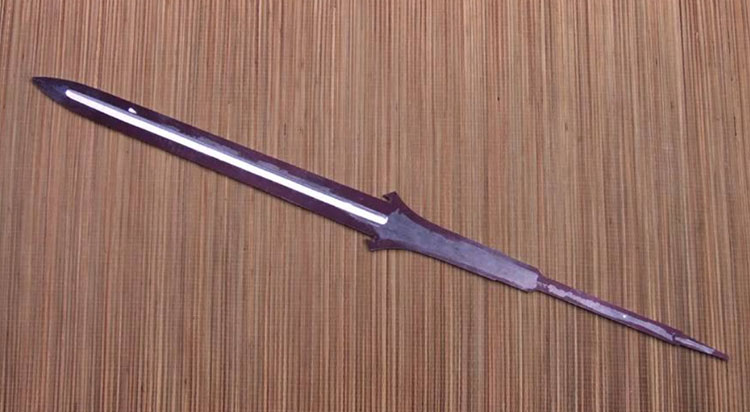 I am a fan of the Destroyer sword not only because of the teeth but also I found the grip on the original Atlantean a bit short for my big paws. The Antedeluvian Sword has more then enough room and feels great. The leather robe is very nice, again a cross between the Atlantean and the Destroyer. The Albion Atlantean has the cord like the original. It gives you a hell of a purchase but will tear your hands up with prolong use.

The sword itself while Jeffrey says its 7lbs feels much lighter then the Albion sword which is only 12oz more. It feels at least a pound and half less. It swings beautifully and I have a much easier time re-enacting the Conan routine.

The castings are just amazing and I am unable to find any flaws. Something I could not say about the Albion sword. Jeffery has pointed out to me though that in fairness to Albion they are a production sword. But in any event Jeffreys castings are far, far superior to the Albion casting.

Something that drew my attention when I first looked at the sword is the pommel. It is hard to explain but it draws your eye its detail is amazing as is the rest of the bronze. I know that it is a cliche' but there is no way that any picture could do justice to the fine detail of the sword. The patina is also beautifully rendered and a perfect blending of age.

The etching is in Russain/ Macedonian and reads Alexander. Jeffrey did a very nice job with stylizing the font with the border. 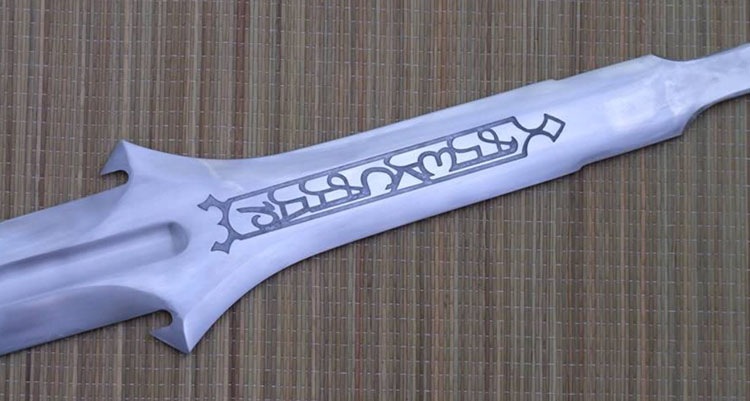 I am a huge fan of old British double guns. They are a perfect example of functioning high art. A master integration of wood and steel. It is this same mastery that this sword exhibits in bronze, steel and leather. Also I am a bit of a romantic and the untold stories that the old British guns hold fires my imagination. Here they are some hundreds of years old and still they live ready to do what they were made for a century or more ago.

I think of this sword in the same way. Where will it be in a hundred plus years? who will hold it and wonder what stories it holds and who owned it? Who was Alexander, whos name is forever etched onto its blade?

For I know were ever it ends up in a hundred years it will be treasured as I treasure it and it will endure far beyond my years. I am simply given custody of it for it now. 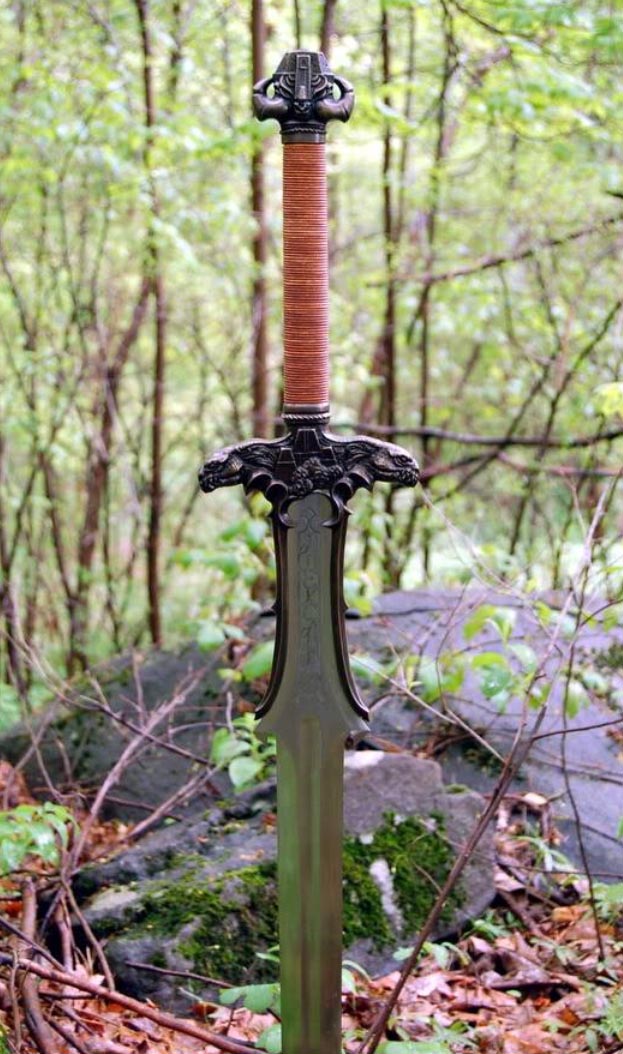