At first glance, the Beowulf Sword by Windlass Steelcrafts looked like it would be a real winner. And indeed, on the surface at least, it seemed to have a lot of things going for it...

However, the overuse of plastic fittings of questionable integrity meant that the initial eye candy factor of the Beowulf sword is deceiving - with an update towards the end of the review that pretty much changes the whole thing in the blink of an eye...

Well having had a love affair for some time with Viking blades (though I typically go for medieval longswords) as well as having been a big fan of the epic poem Beowulf, I got pretty interested when I saw this outing from Windlass. This was before I even saw the film (Gerard Butler = great Beowulf, but otherwise forgetful movie, why can't they just do the damn story right?).

The look of this thing is great, although, it is admittedly just a bastardised Vendel-period sword. That being said, I think why I bought this sword is fairly obvious. It was Christmas season, and dammit, I didn't want socks this year. Instead, I got this sword, as well as the Gen2 River Whitham (which I believe enough has been said about, to which, I fully agree).

The blade is definitely aesthetically pleasing, and falls IMHO nicely into Oakeshott's Type Xa with it's long, narrow fuller. There are some of the typical defects that you will find in swords in this price-range; minor scuffs, some slight waver in the fuller, etc, etc, but on a whole, this is one of the nicer swords I've seen from Windlass. The mirror polish on this sword is also very nice, when I smile at her, she smiles right back ;-) 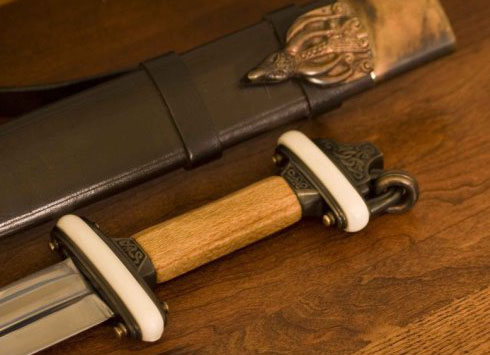 Wood grip. Feels nice in hand, looks good too. Honestly, none of the pictures I've seen do it justice; I'm not sure what type of wood it is exactly, though it's nothing to fancy. But it's well made, and there are no defects in mine. It's also a bit darker than what you see on the web pictures - but this matches much more nicely with the color scheme of the sword. 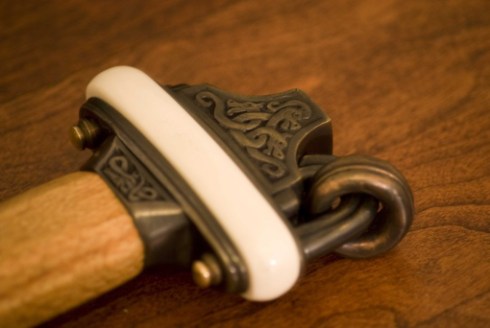 What can I say? This is a beauty; on mine, the castings are perfect. The detail is great, and holds up very nicely even to very close inspection. The whole pommel is very well executed, and is metal (though I know not what kind - EDITORS NOTE: Unfortunately we will find out all about this in the update...). The ring is well done too - in fact, so much so that when I first handle it, I almost felt as if something was loose on the sword, because it clanks about a bit! But on a whole a beaut - my only problem, with both the pommel and the guard, is that the white "bone" bits, are actually plastic. eh, what are you gonna do for 230 dollars?

Also very nice, well done, fit's with the rest of the sword very nicely. Mine had some minor cosmetic damage to the white plastic bits; some spurs where it looked like it had been damaged in shipping, and the plastic was chipped and raised. I took a file and some light sandpaper to this, and scuffed it out, then took it to the rest of the plastic in the guard; it actually looks better now (not shown in pictures) as it looks a little more worn, and less new and well, "plasticy."

The fittings on the scabbard are beautiful; they are antiqued, and the cast parts came out great, with no visible defects. The scabbard is not a wood core, however, just leather (I was under the impression it was a wood core, but it's definitely not). The baldric is also fairly well done; it's a little on the chincy side (i'm tall, and with the belt adjusted all the way down, the pommel of the sword is up to my chest). but the castings on this are nice as well. I plan to scrap the scabbard and make a real wood-core fleece-line scabbard soon, but I will take all the cast bits from the scabbard, as they are very nice.

This sword is quite light, a good representation of the swords of the age. It feels great in hand, and sings nicely through the air! As soon as I unwrapped it, I couldn't help but whipping it around, and it tracks nicely, being so light. The COP is a little low IMHO opinion - another inch or two, and I think it would be perfect. That being said, this is NOT a heavy-duty chopper like the Gen2; it's a much more refined sword. But, so far, I've been quite pleased with it.

Anyway, not long after I got this sword, I sharpened it (also not shown in the photos) using Paul's accusharp method. The edge came out nice, if a little bit uneven - some parts are almost razor sharp, and other parts are at best, adequate. However, this didn't stop me from promptly destroying every single cardboard box in the house. Against these light targets, this sword is beautiful. Clean cuts, though not overly powerful. There were quickly a pile of sliced up cardboard sitting in the recycling pile on account of this thing.

Against water bottles, I've had mixed results, though i think this is mostly do to my own lack of technique. It is not a heavy sword, as stated, but the control is so good, that it tracks nicely into the cut. However, against heavier bottles (gatorade, the like) it tends to lose momentum (again, due to poor technique, as well as the weight of the sword). However, many of my cuts have gone quite nicely, and there is a decent pile of chopped up bottles to join the cardboard. However, none of these cuts have been particularly "clean." I blame this on my sharpening job, and technique. If you have a good hand with a sword, and a fine edge, I have no questions about the absolute plastic-lethality of this thing.

Just a quick update on durability...

Was out doing some light cutting today (water bottles) and made a bad hit, off COP. the ring hilt and it's assembly snapped off...it appears that it was made of plastic! Can't find it either. 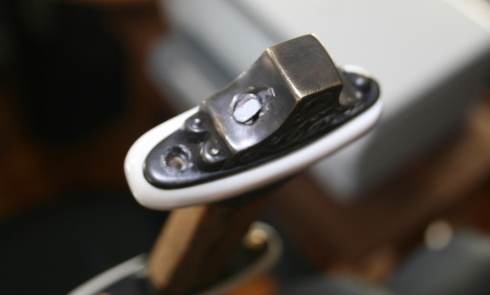 Pommel is still secure, as well as the rest of the fittings. But I'm more than a little cheesed off about that, seeing as how it was one of the cooler features of the sword...theres no other ring hilt swords like it being made (that are in my price range anyway) and now mines got no ring. Stupid windlass...

I'll have to admit I was quite disappointed to see how the Beowulf sword ended up, and not all that disappointed to see it go - after all, ABS plastic on a tactical sword is one thing, but cheap, easy snap off plastic is a big no-no when it comes to functional swords - and Windlass should have known better..

As a display piece, it was probably okay, and while it was far too expensive for what it was at full price, towards the end of its run it, like most Windlass Swords, would have been closed out at below wholesale cost in the Last chance section of their retail website, Museum Replicas Limited. Always a good part of their site to check out to grab some bargains before they are gone for good (though I believe Windlass learned their lesson about plastic - this sword only had one production run).

While you are in the last chance section, you can actually save a further 10% off the already reduced price by using the exclusive SBG Discount Coupon Code (click here for more info)

I hope this review of the Beowulf Sword has been helpful. To Return to Modern Replicas of Viking Swords from Beowulf Sword Review, click here.