A cracked tsuka (Japanese sword handle) is probably the most commonly seen and most complained about issue that arises in the world of production (i.e. non custom made) Katana. And while it is more common in the sub US$300 end of the market, it is not unheard of at the higher levels of non-custom made swords either.

Essentially the problem occurs because a traditional Japanese sword has the tsuka custom made to fit the exact shape of the individual tang by a specialist carpenter. It's a lengthy process, usually taking several days and you can get a good sense of what is involved to simply create the tsuka core in this DIY tutorial..

The problem is, this is simply not feasible to do on a production Katana - and it is unreasonable to expect it is. To be able to make a functional sword under $300, the tsuka alone cannot cost more than $50 to assemble and make..

We have done the costings: to make a tsuka so that fits perfectly and is made how many people would like, individually carved and fitted to the tang with full rayskin wrap, silk ito wrap and basic iron fittings would increase the price of the tsuka alone to nearly $500! And then you have a sword with average blade, average saya, habaki, seppa - and it will go from sub $300 to around $750..

Instead, they need to take a pre-made 'one size fits all' tsuka, adjust it as best as they can, and get it out of there in a few minutes to make it affordable. It is an economy of scale, and to make it work, it needs to look like this.. 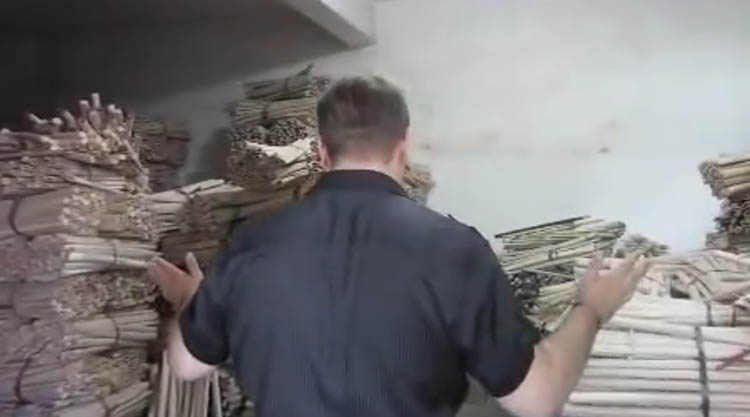 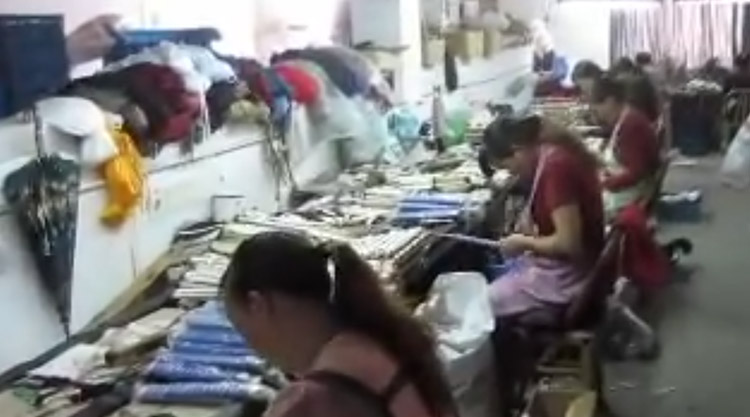 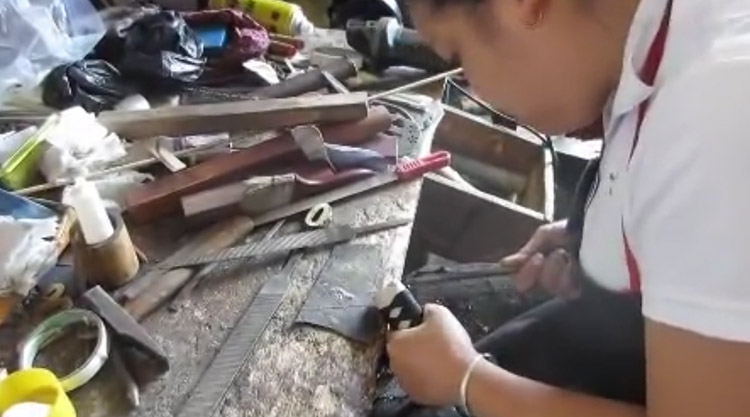 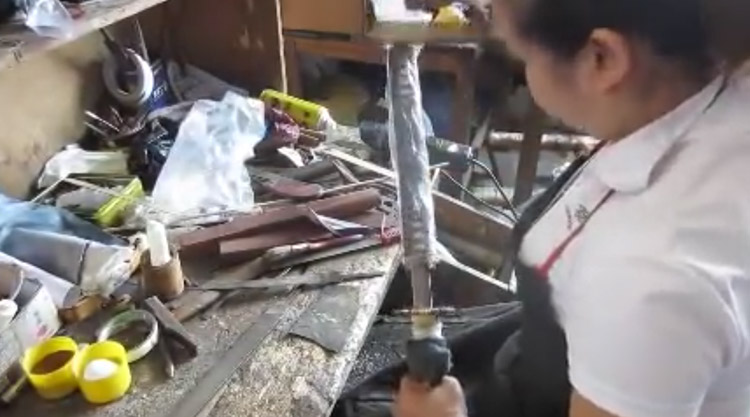 It's not ideal, and usually means that the tsuka is very tight and hard to take off - so if it isn't cracked when being put on, it can be cracked by forcing it off, or a very tight fit will crack rather easily if the wood swells due to sudden changes in atmospheric pressure and humdity.

However it happens, the end result looks like this - in this case a cracked tsuka in  Oni Forge Bujin Katana. 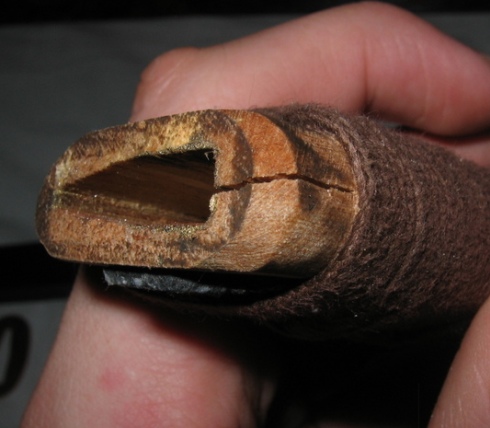 As I mentioned before, the problem with cracked tsuka is not limited to rushed assembly methods but also can occur as a result of ham fisted or inexperienced dis-assembly techniques.

As noted, the tsuka of production Katana is usually on extremely tightly, and if the tsuka is not split when it was put on, it can often be destroyed taking the darned thing apart...

To quote Sean Stonebridge from SFI:

The correct way to disassemble a tight fitting tsuka is by using a specialized tool called a Nakago Nuki, which you can make or pick up online for around $30 (direct from Japan) here: http://www.ksky.ne.jp/~sumie99/tools.html

This is MUCH preferred than the old 'bang it off with a rubber mallet' method, which can and often does CAUSE a cracked tsuka when trying to check for one!

Yes, sometimes actually taking a sword apart for inspection can do more harm than good... In many cases, if a new sub $300 sword feels nice and tight, doesn't creak, and doesn't come off easily, it is better to leave it alone unless you are taking off the tsuka to customize the fittings (change the tsuba, habaki, etc, etc)

So, it it actually dangerous?

Regardless of how it comes about, the concern is that swords with an undetected cracked wooden handle CAN potentially fail suddenly and dramatically in use.

At least in theory... With tens of thousands of production Katana sold every year, in all the years SBG has been going we have never heard one single case of a tsuka failing suddenly and causing the blade to fly out like a spinning helicopter of death..

Rat tail tang Katana, that's a different story. But even these make shift tsuka seem to hold pretty well, cracked or not.

Most more experienced collectors know that as long as the rest of the fittings are in good condition, a cracked tsuka it is more of a cosmetic issue than a truly fatal flaw.

To quote David Buck from SFI:

In reality, the biggest concern for anyone using a Katana isn't that a cracked tsuka will cause it to fall apart mid swing. Indeed, the most common catastrophic event likely to befall a Katana is blade failure (breakage) or user error (losing your grip).

That said, it's obvious that ideally all components should be in the best condition possible because even the remotest chance of an unexpected launching of 3 long razor sharp missile is obviously a serious safety concern!!

So let's err on the side of caution...

As I mentioned, cracked Tsuka have been reported on all production swords at all price levels from Hanwei, Dynasty Forge, Oni Forge, Masahiro, Musashi, Ryumon, Cheness Cutlery you name it no production sword maker is immune (though of course the incidences of cracked tsuka are MUCH higher for swords under the US$300 mark due to the volume of swords being made).

Indeed, this issue is only a mute point for swords that have had the handle epoxied to the tang - such as some Musashi swords, the Hanweis PK and several others.

As it is a largely unavoidable situation and something that is very much a luck of the draw kind of situation, if you end up with a cracked tsuka that is causing a creaking sound or some looseness, you have the following options:

The best option is clearly the last one for most people, or making a new tsuka yourself that would otherwise cost you several hundred dollars, but here will just cost you some of your own time rather than paying someone else to use theirs.

In a perfect world, all affordable production swords would be manufactured like modern day firearms on an assembly line with exacting tolerances and high tech QC. Unfortunately though, the demand for swords (being a boutique niche industry) is simply not high enough to justify the huge expenses involved in this kind of manufacturing process.

At the end of the day, cracked tsuka or not, we have proved it time and time again that it is quite possible to make a very durable and usable Katana for under $300. To satisfy my own curiosity, I once took a sword with a cracked tsuka and no mekugi pegs to hold it in and did my darnedest to try and make the blade fly out, even resorting to banging it repeatedly on an immovable tree trunk..

It did not budge even a few millimeters - that extra tight banged on fit actually holds it in place remarkably well, and the pressure from your hands on the tsuka also help to hold the tang in place..

One final word, quite a few people who don't understand the manufacturing process encourage others to return a sword with a cracked tsuka and get upset that it does not fit perfectly, but this is an unreasonable expectation. As we noted at the start, to make it fit perfectly requires many hours of work, and would add around $450 to the cost of your sword..

So your options are when faced with a cracked tsuka, is to either spend 10 times the price, customize it yourself or just accept that a sub $300 is what it is, and enjoy it like the rest of us..

Just keep an eye on it and check that the assembly is nice and tight before you use it, just as you should keep an eye on any chips or cracks that may develop in the blade from cutting practice. Because in reality, you should be more concerned with sudden catastrophic blade failure than some freak event that causes the tsuka to somehow burst open, all the ito to come off with the fuchi and kashira and fly through the air..

I hope this information on cracked tsuka has been helpful. To return to a Beginners Guide to Authentic Japanese Swords from Cracked Tsuka: The Scourge of Production Swords, click here