English swords with the so called 'Mortuary Hilt' were once a popular replica with the Hanwei forge. They have made at least four versions of these swords, the most ornate being the Cromwell sword (reviewed here) the blunt Practical Mortuary sword and versions of the 'Mortuary Hilt Sword' one antiqued and one with a standard finish.

In this review I'll be taking a look at the discontinued antiqued version of these swords from the English Civil war (early to mid 1600s).

I suppose that what first attracted me to these iconically English swords was their distinctive and alluring appearance. With a straight, double edged cut and thrust blade and a very unique hilt that looks something like a human ribcage - it seemed a good choice for my first real foray into the world of replica Renaissance blades (which until recently had not held much interest for me, primarily being interested in earlier time periods).

When the sword first arrived however, I was in two minds about it: some things I really liked, others left me somewhat disappointed...

I certainly have no qualms about this English swords assembly - despite the fact that it looks somewhat delicate, it is actually surprisingly robust. Everything was tight right out of the box, and remained so even after extensive testing that would certainly have loosened it if it had any structural weak points. 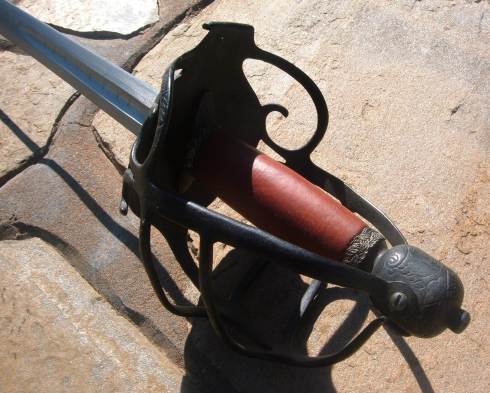 With the three central ridges of the blackened and antiqued stainless steel basket hilt firmly screwed to the pommel, and a T bar shaped shoulder that sits firmy under the top of the guard, it really is quite ingeniously constructed, offering excellent protection to the hands as well as enough strength to withstand numerous jarring impacts without ill effect.

The top of the basket hilt itself is very ornately decorated without being the slightest bit 'gaudy'. 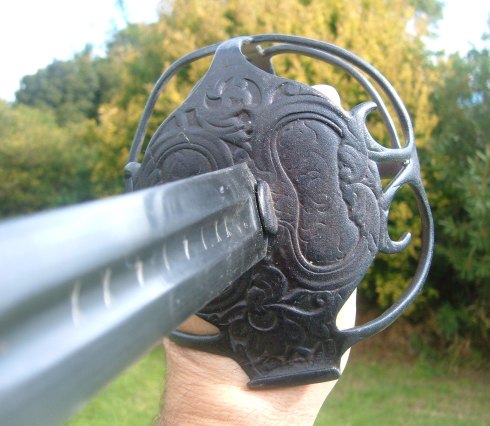 And as you can see from the rear, it encompasses and protects the entire hand easily from any frontal attacks that would slide down onto it. 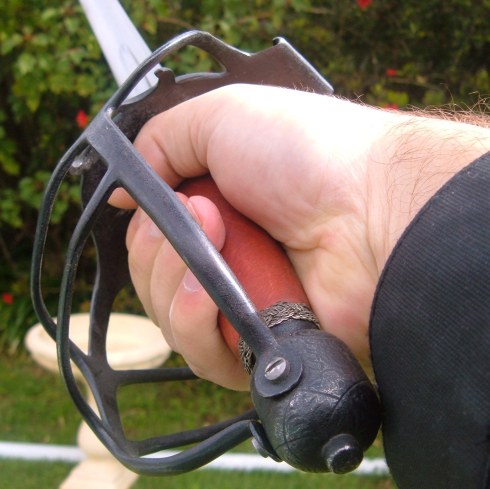 I must admit that I was a little worried at first that the basket hilt of these English swords was a little tight and restrictive when in use. But as you can see from the pictures, there is just enough room on both sides to execute complex sweeps of the sword without a need to worry about an average sized hand jamming up inside it (though people with very big hands may have problems). 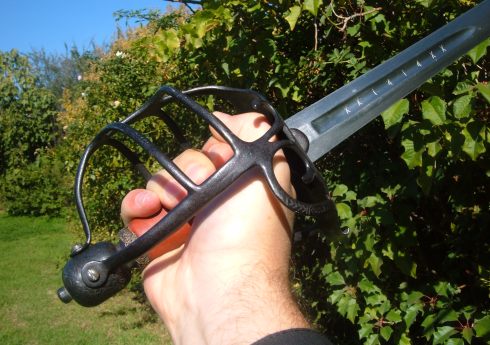 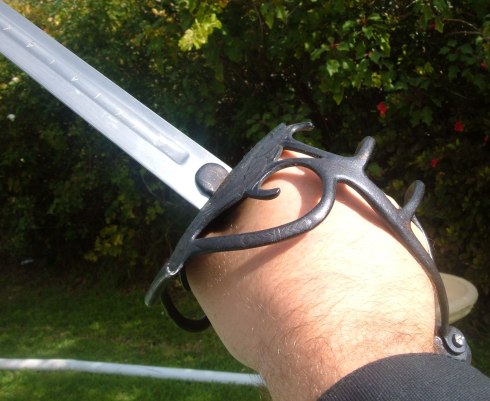 Inside the hilt, the silver Turkish knots on either end of the handle look very attractive, but the handle itself is probably the most awful looking brown color I have seen on a hilt in some time... 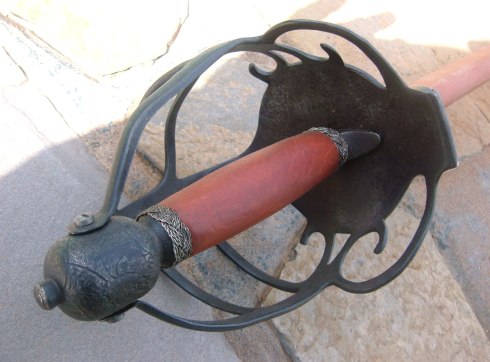 'Poo brown' springs immediatley to mind, and it looks even worse when contrasted with the blackened antiqued finish. The leather is certainly quite comfortable in the hand, but it should be artifically aged to match the rest of the hilt (and can be done with steel wool or sandpaper at home if so desired).

This English swords scabbard is of course colored the same way and is exceptionally bland - though at least it is a wood core job with a real leather wrap stitched at one side. But these two elements need some work.

The 33" blade is actually quite light and thin, tapering at the profile to a nicely pointed V. With the entire sword weighing in at 2lbs 3oz, and the point of balance approx 3" from the guard, it is also extremely fast in the hand and incredibly agile. 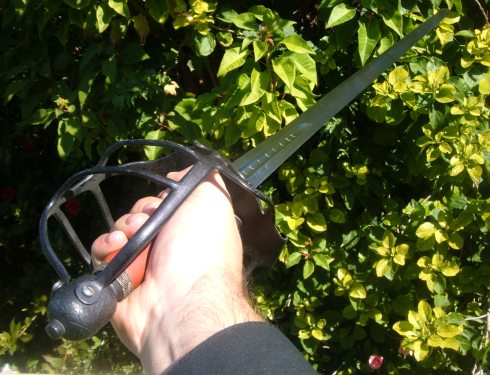 Historically, these English swords were often slightly heavier (by around 5oz) and balanced just a tad further out towards the tip (by about 1") so this seemingly nimble sword is likely to handle quite differently to the originals, which were primarily issues to the cavalry and were considered by many to be an early forerunner of the military sabre.

Despite this, I really enjoy the way this sword handles - and it is beautifully tempered, able to be bent almost to 45 degrees and springing back to true every time.

Cosmetically, the blade has a nice satiny finish - and a short 5.5" fuller that starts about an inch from the guard down the middle of the blade is engraved with this English swords original makers mark "XX1414XX" - the meaning of which has apparently been lost in time. 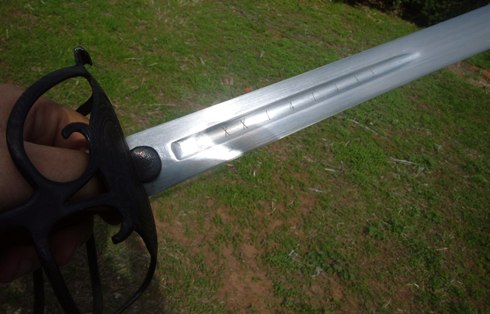 My main gripe with this sword is the sharpness, or more specifically - the lack of it.

You can easily and safely run your fingers the entire length of the blade, and the geometry by itself, and it's relatively light weight and rear focused pivot point and center of balance suggested to me that without a sharp edge, it would be useless as a cuttter right out of the box...

But of course, there was only one way to find out.

I was quite confident that the V shaped tip would have no problems with the thrust right out of the box, but really doubted that I would be able to significantly cut ANYTHING with the way the factory edge was sharpened.

To be fair, it wasn't far off sharpened - as the blade itself is quite thin and springy and it would not have been much of a job to get it up to speed. But I had to see for myself how it did straight out of the box - and as you can see from the video below, the results were largely as expected...

As you can see, once sharpened with an accusharp it performed extremely well (I used the accusharp because I always like to find ways that ANYONE can do to rectify an unsharpened sword. It would have been better with a hand honed edge, but a few minutes with an accusharp showed its inherent cutting ability - and the difference was like night and day). 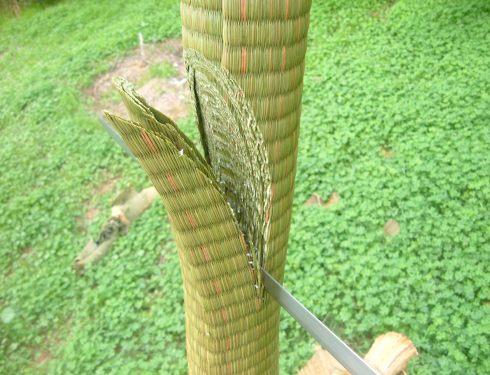 Despite a few misgivings, I really do like Hanwei's take on these Mortuary Hilt English swords. It is lightweight, but sturdy - and once sharpened capable of delivering some surprisingly effective cuts with minimal effort. And it thrusts like no-ones business!

Overall, considering the price tag this not a bad buy - and an absolute joy to weild.

Like almost all the Renaissance swords we are looking at, this blade has gone the way of the do-do..

However, bearing the good and bad points of this blade in mind, for anyone looking for something similar we strongly suggest you check out the range of Renaissance swords available HERE at Kult of Athena