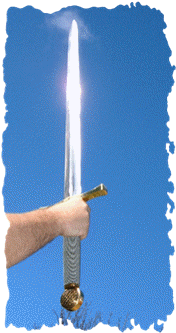 There are a lot of so called Excalibur swords for sale on the net.

But most of them I think that King Arthur wouldn't touch with a 10' pole...

The majority are just cheap stainless steel ornaments - not swords.

The first one I ever got my hands on was one of the best.. An almost exact replica of the classic 1981 cult movie "Excalibur" by John Boorman, the Brass Excalibur sword by Generation 2 (now Legacy arms) was my first fully functional "beater" bastard sword ever..!

Unfortunately though, as of January 2006, Generation 2 started retiring these swords and for several years they were unavailable. But every now and again, they are brought back as a limited edition release.

But it is never enough to keep up with the demand - and when you see this sword you will know why..

The Brass Excalibur was the second sword I ever ordered from Generation 2 (the first was their Roman Wasp Waisted Gladius), so I already had a pretty good idea of what to expect...

A durable, no nonsense beater sword with quality fittings and a keen edge.

So it was no surprise that when I unwrapped my Excalibur swords large box my first impressions of this sword were extremely favorable.

For a start, I was struck by the Excalibur swords overall size.

This is a BIG sword with a massive handle that easily accommodates two hands, yet can be wielded by one without too much difficulty. In other words, a "bastard" or hand and a half sword - though I wasn't really expecting it when I ordered it.

From the pictures and the angle it is displayed at on most websites, it looks like a standard one handed arming sword. So it came as quite a pleasant surprise to get a bastard sword for such a low price tag...

Anyway, once I'd cleaned the protective layer of renaissance wax (or its equivalent) that coats all Gen2 swords from the blade and handle, I took a few moments to check it out. 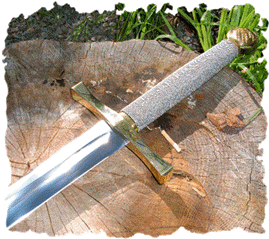 The Excalibur swords highly polished solid brass pommel and cross guard were simply stunning - perfectly formed with a great deal of attention to detail. And the authentic chain wire wrapping was perfectly wound and looked fantastic.

In fact overall, these were the kind of quality fittings you would expect to find on a sword several times the price, with everything solidly assembled.

Again though, a closer inspection of the Excalibur swords actual blade reveals that like all Generation 2 swords I have seen, the final polish could have been a bit better. There were obvious grind marks from the final shaping that were not 100% consistent, overlapping here and there a little roughly at times. 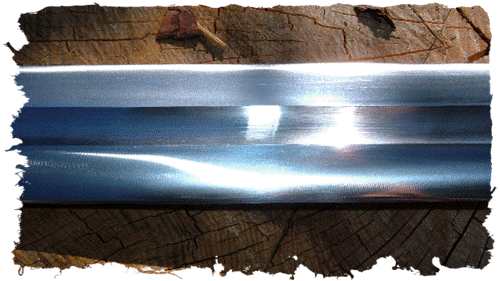 But these cosmetic faults are only visible on close inspection and if you are really looking for them because overall the Excalibur swords blade still looks very attractive, especially when reflecting sunlight, giving this blade an almost "magical" quality. 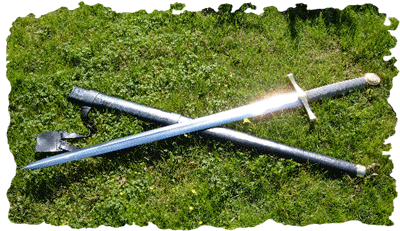 This sword also came with a choice of scabbards, a leather one or a wooden one with a frog for only US$20 more.

I chose the wooden one - mostly because that's how I wanted to display the sword and also because storing a high carbon steel sword in a leather scabbard for any length of time is a sure fire recipe for rust. The Excalibur swords scabbard was fairly simple, and for twenty bucks more I wasn't expecting a lot. And to be honest it isn't really very practical - as you'd need to be over 7' tall to stop it from dragging on the ground!

But it suited my needs well enough for display purposes - but like all my swords, that wasn't the main reason I wanted it for... 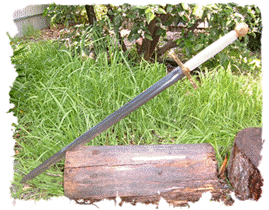 Like all Gen2 swords, the Excalibur swords blade was incredibly sharp. In fact, when I first used my thumb to carefully get a rough indication of how sharp it was, I felt it trying to bite and knew at once that this was one MEAN blade! So when I took this it outside to test the Excalibur swords balance and handling, I was more than a little wary of how nasty a slip could be with this monster!

Now at 5lbs 5oz, this sword is really quite overweight (around 50% heavier than a sword of this type should be) and while it can be handled with one hand, it is far more suited to two handed usage. Surprisingly at this weight you'd expect this sword to be totally unbalanced - but Gen2 have done a very nice job in this area - the Excalibur swords point of balance is actually around 3 and 1/2 inches from the cross guard.

This makes handling this sword relatively smooth considering it's weight (it has been said that it is preferable to have a well balanced but heavier sword over a light and unbalanced one, though obvious a light and well balanced sword is even better!), but recovery time from a swing is still almost about half that of a lighter swifter sword of the same type, which obviously would put any potential King Arthurs life in extreme danger in a real sword fight!

However, any given swing of this blade generates a massive amount of force...

"Put just a little power into it and you can easily deliver a terrible blow that an opponent would be hard pressed to parry..."

In fact, with such an over strong contemporary blade, attempting to parry or strike against it edge on edge with a historically accurate sword would almost certainly cause catastrophic failure of the historical, and even trying to stop it with a wooden shield buckler, as you'll see from my tests, might not be the best idea...

It was pretty obvious that this sword will be able to perform some very heavy duty cutting. But for my first test, I felt it important to determine if its mass would cause it to lose the ability to accelerate to the optimal cutting speed. Therefore the first test was a simple one handed strike against a light target, in this case a water filled plastic 2 liter milk bottle, letting the blade do all the work.

To get an idea of how sharp this sword is as well as to see if it's weight would cause it to lose the ability to accelerate to the optimal cutting speed, the first test was to be the easiest - the tried and tested water filled plastic bottle cut - in this case a 2 liter milk bottle with an easy one handed stroke that let the blade do all the work. 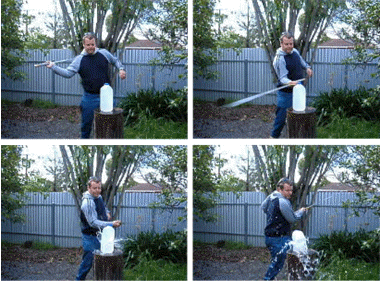 As you can plainly see, the cut was effortless with the Excalibur swords blade easily reaching the desired speed. So far so good...

"For my next test, I decided on something a bit more demanding..."

In fact, in many circles what I did is easily considered to be "sword abuse" - after all, splitting blocks of wood is more the task of an axe than that of a sword. But since this beater was a Generation 2, who as you may know are well known for making swords considerably more durable than historical swords ever were (hence the extra weight) I decided I'd give it a go.

Taking a large block of wood for the fireplace, I put it on a large tree trunk, raised up my sword and brought it down in one mighty blow... The Excalibur swords blade whistled through the air and split the block in two. But it didn't just stop there...

Indeed, on my first strike I was so surprised by the lack of resistance that the blade actually slammed horizontally against the immovable tree trunk with such force that I felt the vibration of the strike reverberate through my hands.

"Now in a lesser sword, such a strike would have probably broke the tang at the handle or shattered the blade..."

But the Brass Excalibur didn't mind - this sword was hungry for more!

I checked the blade for any marring, and while there was predictably some buffing of the surface of the blade, this was only cosmetic - with no chipping or serious marring of the blade.

But what surprised me the most was that, despite going through the wood and hitting the tree trunk edge on - the sword was still as sharp as ever!

Since these tests, I have subjected this sword to quite high levels of "abuse" and my only criticism is that I wish that the pommel was peened instead of threaded. These days, almost all Generation 2 swords have a peened pommel. Since this one is threaded, I've found that the hilt has loosened every so slightly while my peened Gen 2 swords have not.

The other thing I have noticed after training with this somewhat heavy sword is that it has increased the speed and power of my techniques when I switch to a more traditionally weighted blade. In this respect, this sword is great for building the strength, speed and power of the muscles used in traditional swordsmanship.

"A word of warning though, when training with this sword you need to be especially aware of where the blade is at all times..."

Because with such a strong, sharp blade one mistake and you could easily chop through both flesh and bone.

At the end of the day, once everything is said and done, this sword is one hell of a beater! And for anyone considering a durable, beautiful and top quality value for money bastard sword - you'd be hard pressed to find too many swords in this price range that can compare. And as far as Excalibur swords go - this one has to be it!

This stunning sword tends to be out of stock for extended periods. However, when it is available the best place to pick it up from is HERE at Kult of Athena where they offer it for a very reasonable $475 - have fast and reliable shipping and clearly designate if it is in stock or not, saving you a lot of potential hassles and headache.

Note: there is a cheaper version of this sword made by Generation 2 with a black wrapped leather hilt. But honestly, it is quite ugly and it is better to wait until this model is in stock or find an alternative from other makers of Excalibur swords as without the wire wrap, it just isn't an Excalibur anymore..

I hope this information on replica Excalibur Swords has been helpful. To return to sword-buyers-guide.com Homepage from Generation 2's Brass Excalibur Swords, click here.