The Roman Gladius may not be one of the most numerous swords being made for the sub US$300 market these days. But one of my favorite forges, Legacy Arms (Formerly - and still in some circles, known as Generation 2), makes not just one but two...

The first type the Wasp Waisted Gladius (also known as the Maintz Gladius) was actually one of the first reviews I did for this site way back in 2005. But here is a the long awaited and detailed follow up by SBG contributor - Mike 'ShooterMike' Harris, we take a look at the other popular design -  the straight bladed, thrust optimized Pompeii variant that was said to the tip of which was "the tip of this sword the Romans forged an Empire.." 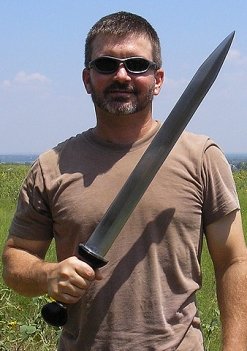 This soon evolved into the broader, shorter Maintz and Fulham type gladii. These earlier patterns were of a "wasp-wasted" profile and designed for both thrusting and cutting. Later the pattern was changed to what is now referred to as the Pompeii pattern.

The Pompeii Gladius did away with the wasp-wasted blade profile in favor of a simpler straight blade with a shorter point. However, while it was designed primarily as a thrusting sword it was still a decent cutter.

There are two models of Roman Gladius sword in Imperial Weapons' Generation 2 line, the Pompeii and the Maintz (also known as the Wasp Waisted Gladius).

I initially wanted to obtain one of each to do a comparison review. However, at the time I was ready to order Clyde Hollis at Imperial Weapons only had the Pompeii pattern in stock, with the Maintz pattern gladius out-of-stock for a while. So I went ahead and took the financially expedient route and got the Pompeii, deciding to wait a while on the Maintz.

Ordering, shipping and delivery were uneventful as usual from Clyde. I ordered, he sent UPS tracking information. When UPS said it would be delivered it was sitting on my front porch by 2 or 3 o'clock. Very smooth and uneventful...just like we all like it.

The sword arrived in the typical brown cardboard box from Imperial Weapons. Inside was the typical "sword-wrapped-up-like-a-mummy" in newspaper, cardboard and bubble wrap, secured with lots of tape. It was in perfect condition and seemed to be quite appreciative to be free at last from its mummification. As usual, the blade was coated with a liberal coating of petroleum jelly. This was easily removed with a few heavy duty blue "shop towels." What I found was a very attractive Roman pattern short sword.

The first thing that struck me when I handled it in my living room was an overwhelming feeling of "handiness." And that impression has only grown stronger as I've gotten to use this sword.

At 22.25 inches, the blade is slightly longer than the normal 20-21 inches for a Pompeii Gladius. However, it is very well balanced and combines both a bit of blade presence with good point control in the thrust. The tip seems to be kind of a hybrid between a true Pompeii type and the more pointy and tapered Maintz type. I would say it falls just about halfway between the two types.

This makes it a very attractive blade in my opinion. I have never been a fan of the true late Pompeii type, considering that the tip was not tapered to a graceful point. This sword is more to my liking as far as the tip goes. The blade is of flattened diamond cross section which makes for a very rigid thrusting sword.

The polish on the blade was very slightly uneven near the hilt, but was nice. And it was not the usual mirror polish I have seen on most other Generation 2 swords. The finish is polished, just not so brightly as my previous swords from Gen2. And I like this finish much better.

The edge was plenty sharp. I would rate it at almost paper cutting sharp, and a few places would actually cut paper. In my opinion, this is the edge that should come on most swords. A good working edge.

Otherwise, the grip is very attractive and reasonably comfortable. The finish is nice and the color contrasts well with the otherwise black hilt finish. If the sword is used primarily as a thrusting short sword, this grip works very well. And it is certainly quite attractive. 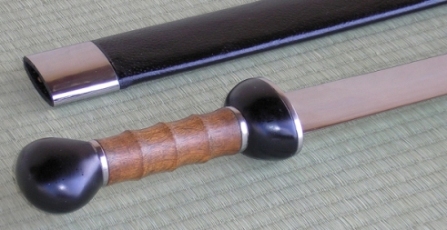 The pommel is correctly made of hardwood and nicely fitted and stained. However, it is made in a flattened semi-egg shape that looks a bit different than the ball shape of a historic Gladius. While this makes it less historically accurate, it is very comfortable and somehow seems quite appealing to me. Historical purists will probably rate the sword down significantly because of this inconsistency. But the more I use it the more I like it. 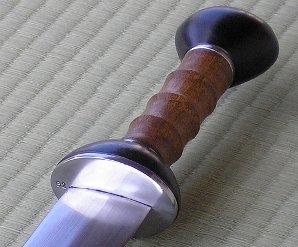 The guard is constructed of hardwood and a steel face plate in the typical fashion of the Roman short sword. This is probably the most historically accurate part of the sword.

With the exception of the "G2" stamped into the front of the guard plate, this guard would be at home on any high-end reproduction of the form...

All the newer Generation 2 swords seem to be sold with the same type of scabbard. While it doesn't look historically accurate for a Roman sword, it is still a good quality wood core scabbard, covered in pigskin, dyed black and fitted with a polished steel chape at the mouth and a nice looking finial on the tip end.

I tested this sword on the following targets:

What I found was that the sword is very handy and quick, and works well on light targets. It cuts bottles cleanly and easily. However, cutting Mugen Dachi tatami mats shows what happens when cutting something more substantial. It will almost cut a single mat for me. Others with better cutting skills will probably not have trouble cutting single mats.

What I encountered was that just before severing the mat I seemed to "run out of blade." The grip turned a bit in my hand and I lost edge alignment, so the sword slid along the remaining slivers of mat, not cutting until the tip lost contact with the mat.

I also did a little bit of impact testing on the tire pell. While the "beating" was minimal, it still demonstrates that the sword seems durable and the edge holds up well. At the end of the testing I couldn't discern any loss in the sharpness of the edge.

I tested the thrusting capabilities on my tire pell, on an unpunctured truck tire sidewall. The Pompeii had absolutely no trouble penetrating until the tip penetrated the off side of the tire.

VIDEO: Testing on the Tire Pell

Hard testing on the Tire Pell

This sword really shines as a short thruster.

In my opinion, it performs well for a Roman pattern sword and is typical of the type, with the exception of the differently shaped pommel and round grip.

The grip can easily be changed as it is high-grade stained wood. Since testing the sword I have changed the grip to a much more pleasing oval shape.

And now I expect the cutting to improve significantly.

Our top recommendation for all Roman swords would have to be Kult of Athena, and this sword is no exception. You can find it for a mere $232.00 HERE in their store.