With a distinctive blade type - and both being based on the same sword - close comparisons between the Alexandria and the Ronin Model 2-3 Limited Edition are bound to happen..

The replica Harriet Dean Sword by Ronin Katana caused quite a stir in the world of serious medieval sword enthusiasts when it first came out.

With a distinctive Type XVIIIc blade - most collectors were quick to compare it to the highly desirable $1350 Albion Alexandria Sword - but at about a third of the price with no waiting period - and so it was natural that a lot of sword enthusiasts jumped on the chance to get one of these blades - helped no doubt in part by Matthew Jensen's quick review of this sword on his YouTube channel when he mentioned he would rather have 3 of these than one Albion..

Here is a review by one of the many people who got in early when this sword was first released.. 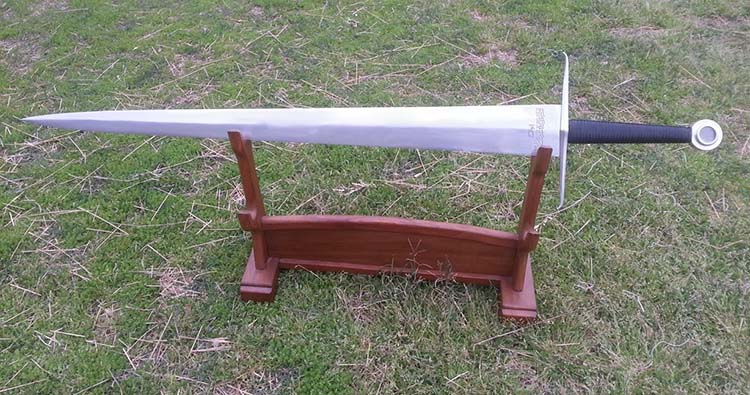 An Alexandria arsenal type XVIIIc sword for a third of the price of the Albion version? Is this really possible?

That question was what drove me to buy this sword on the first day it was listed on the Ronin Katana website. In the following review, I will attempt answer to that question by providing my impressions and observations from handling and cutting with this sword.

This sword is a reproduction of the historic "Harriet Dean" sword. The Harriet Dean sword is one of the last remaining swords from the arsenal at Alexandria. It was originally purchased by Bashford Dean and bequeathed to his sister Harriet Dean in 1928. Upon Harriet's death in 1943, it was sold at auction and its whereabouts were unknown for 72 years. Then, in 2015, it was found in Texas as part of a folio of arms consigned for sale. This sword sold at Christie's Auction house for approximately $550,000 US dollars. Here is part of the description provided in that auction listing:

"This sword was almost certainly acquired by Bashford Dean during his six month acquisition tour of Europe and Turkey in 1919-20 when he is known to have purchased European armour and swords from the Military Museum housed in the Saint Irene Arsenal in Constantinople (Istanbul).

A very similar sword bearing the same inscription, date and makers marks was bequeathed by Bashford Dean in 1928 to The Metropolitan Museum of Art in New York. This sword now forms part of the Bashford Dean Memorial Collection (accession no. 29.150.143, on view in Gallery 370).

De Cosson states the translation of the Arabic script as 'Abu'l-Nasr Shaikh. Unalienably bequeathed by al-Malik al-Mu'ayyad, in the magazines of arms, in the Frontier-City of al-Iskandarîya, in the year 812(sic)'. He notes that Sultan Malik Mu'ayyad Abu'l Nasr Shaikh reigned from 815 AH (1412 AD) until 824 AH (1421 AD) and that the erroneous date 812 AH present on both this sword and on that held by The Metropolitan Museum of Art should be corrected to 822 AH (1419 AD)."

Here is a link to a video describing this sword's discovery and history: 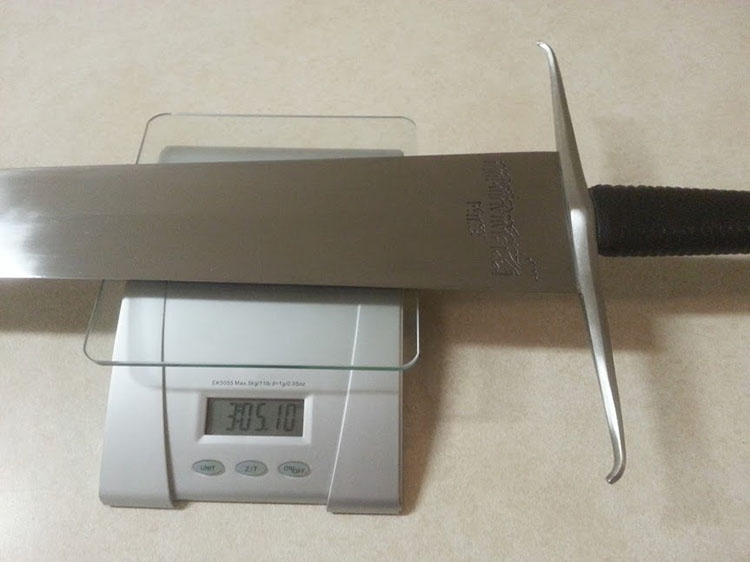 This sword has a very broad thin blade that is characteristic of type XVIIIc swords. The blade on this sword is 1 inch longer and 0.2 inches wider than the Albion Alexandria/Principe type XVIIIc blades. The primary bevel from the central ridge to the edge is fairly flat, resulting in a thin (but not sharpened) cutting edge. But even unsharpened, when I accidentally brushed my index finger against the fine edge, it cut my skin easily. As mentioned above, the point of balance is at 8 inches, which is about twice as far out as it should be. There will be more discussion on handling later in the review. 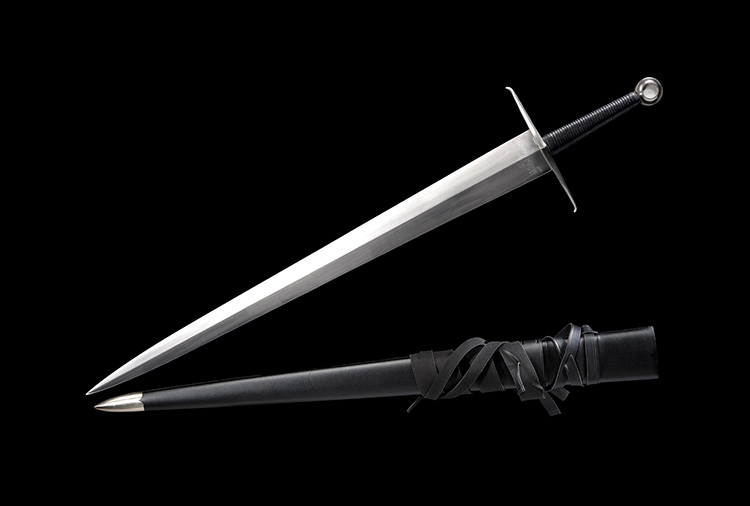 The scabbard has a wood core and is leather wrapped. The scabbard is a bit loose on this sword. If turned upside down, the blade will slide out. It comes with a leather belt and suspension.

After completing test cutting, I decided to take the grip off to see what the tang looked like.

Here is what I found: 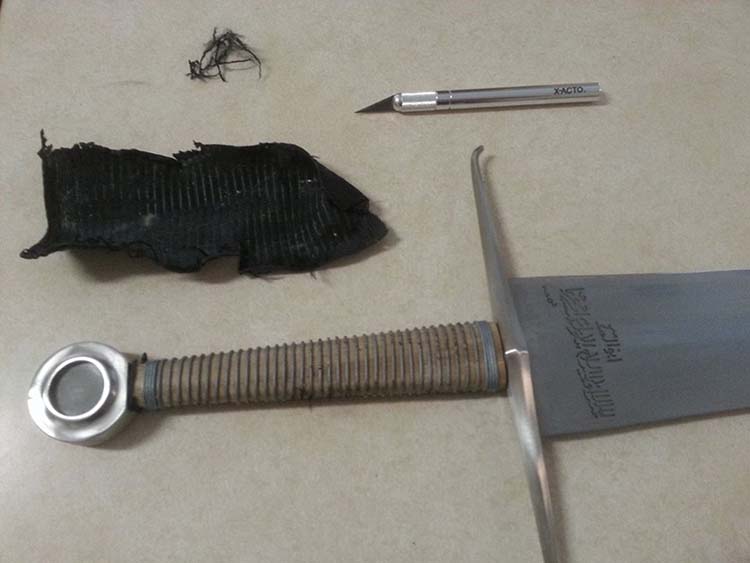 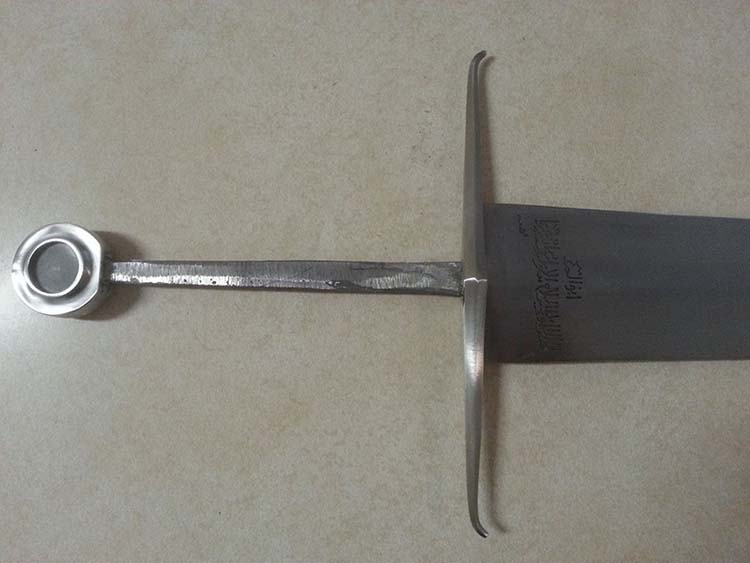 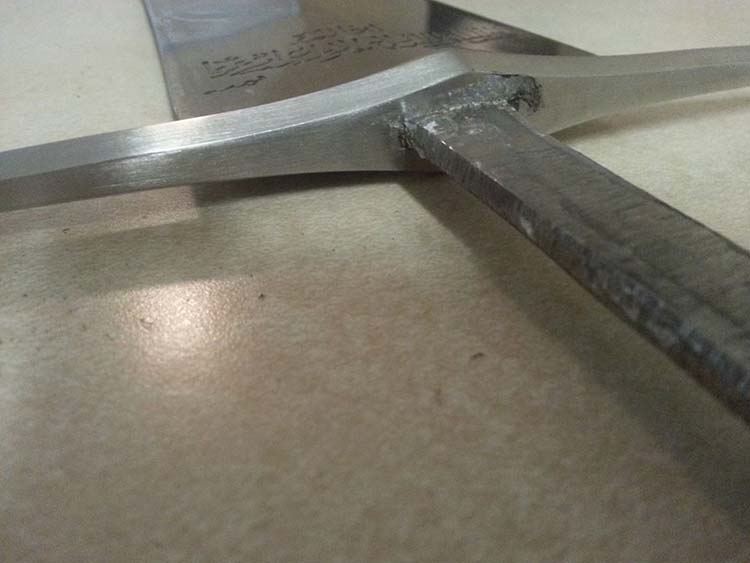 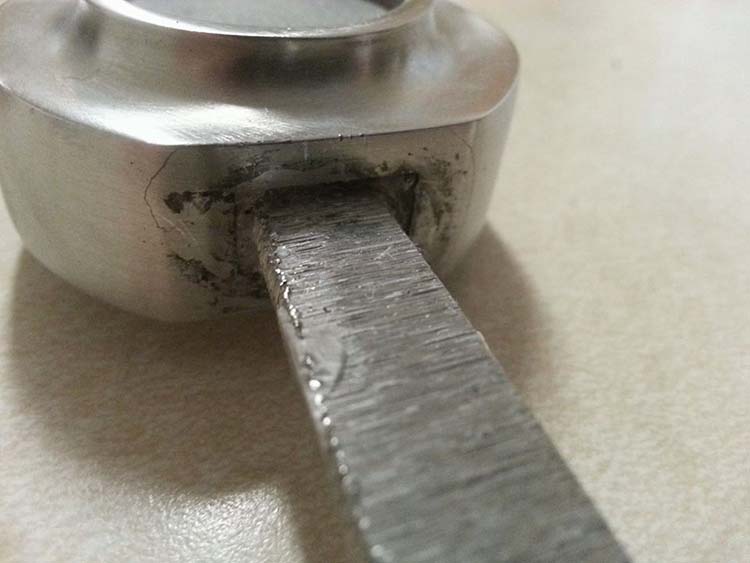 Upon removing the leather, I at first thought that the grip had a wire under-wrap. But upon closer inspection, it is wrapped with some sort of grey cord. The wood core came apart fairly easily with a small screwdriver and a rubber mallet. I used an Exacto scraper to remove the epoxy that covered the tang.

Here are the tang measurements:

I spoke with Clive Thomas (who can be seen in the Christie's video in the introduction). He said the Harriet Dean sword's tang has the following measurements:

The much narrower tang must surely contribute to the difference in balance between the two swords, along with the larger blade and much smaller pommel. 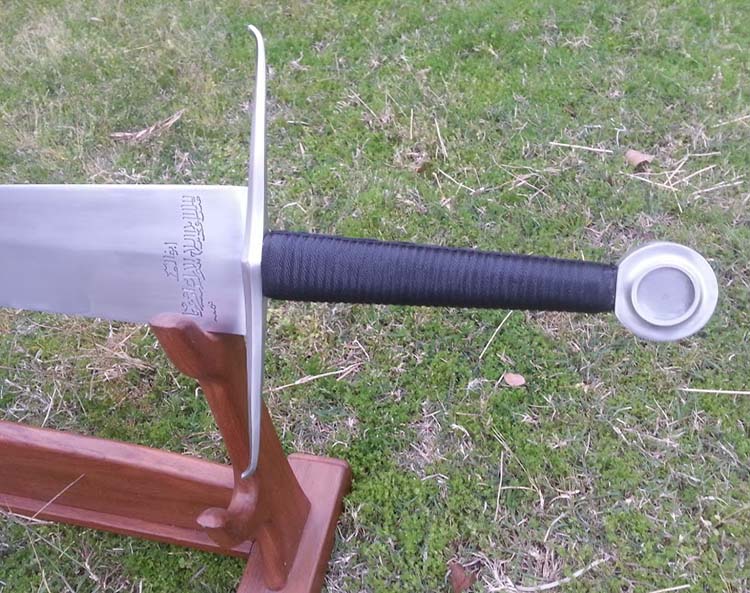 The sword is lighter than other reproductions of this type of sword, but the point of balance is 8 inches forward of the cross guard. Even so, the sword doesn't feel terrible during dry handling.

The very forward balance, though, affected handling, increasing recovery time and effort after a powerful cut. But it delivers those powerful cuts very effectively.

Here is some test cutting that I performed today. The mats that I cut in the video are tougher used Japanese tatami, rather than the usual Mugen Dachi tatami, which I am currently out of. I will pick up more Mugen Dachi next week and do more cutting.

The blade had no trouble cutting through these tougher mats. My initial impression is that this sword cuts at least as well as the Principe that I cut with previously. The blade heaviness is ever present, but it didn't significantly effect my ability to cut. However, the time and effort required to recover from a powerful cut was much increased, as can be seen after the first double cut in the video.

Note: I sharpened the edge this morning. It took a bit more effort than I would have expected. Had to spend a while at 400 grit to establish an initial edge bevel. As I mentioned above, the "edge" was very thin, enough to cut skin, but it was not sharpened.

The Limited edition version AND the standard stocked version (which is identical except it does not have the inscription) can both be found at the same price as KoA and Ronin here in the SBG Sword Store, $450 for the limited edition and $425 for the readily available standard version respectively.

While technically they may not be 'sharpened' the edges are not blunt and it can cut straight out of the box.