A functional Ninja sword for under $100 seems like a deal too good to be true. And yet, young sword enthusiast Jesse Haushalter found such a deal from a respected sword brand Musashi Swords (now also known as 'Musha Swords') - and here he puts it through its paces to see what it can do.. 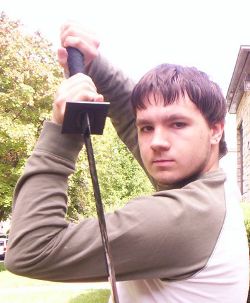 I ordered the Koga Ninja sword from Trueswords.com and it ran me a cool $75 + $8 for Fed Ex Express Shipping (Editors note: actually, now they are $65! See the bottom of this review for info).

Therefore this sleek, blackened katana arrived at my doorstep for about $83.

Not a bad deal especially when you consider that it arrived in 3 days.

The Ninja sword came packaged inside a sturdy cardboard box, and inside of said box was a slimmer, more ornately decorated box that bore the Musashi logo and the kanji for ninja. Upon tearing through the cardboard with a carving knife, and gingerly opening the Musashi box I came into contact with the sword itself. It was placed between two Styrofoam pads and was covered in bubble wrap. (sorry no photo for this) As I began inspecting the saya and tsuka I marveled at the style of the sword. Uniform black.. you can't go wrong there.

~TSUKA: A black cotton wrap, with faux black rayskin panels and 2 bamboo mekugi. Take note of the blackened copper menuki. My initial impressions of it were mixed. I like the black rayskin even though it is a little too off-purple in hue. I also found the cotton wrap to be very comfortable. Though it felt a tad loose, but not so much so as to cause unraveling.

~SAYA: The saya is lacquered in a heavy piano lacquer and stamped with a kanji that signifies "NINJA". Neat. 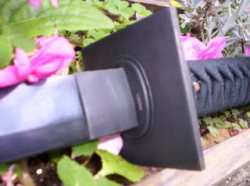 Upon my first inspection it seemed to be well painted, but after taking another look at it i noticed that the paint job was quite imperfect.

As you can clearly see several splotches of copper. Eh, it's a $75 Ninja sword, so this in and of itself is forgivable, and easily fixable.

~BLADE: Upon looking at the blade I was taken aback by how well done the anodization was. It looks flawless, like a blade made out of pure ebony. Obviously no one would see this blade at night. (which is part of it's purpose) Though it does have a tendency to reflect light. So a matte finish would have been more effective, albeit' less aesthetically pleasing. Overall I like the finish on the blade.

I like the way this Ninja sword feels in my hands. It's lightweight, agile and it's very easy to make devastating slices with it. Thanks to the (mostly) razor sharp blade. A plus with this particular sword is that unlike many other swords Musashi sharpened this one all they way down to the habaki.

In fact, it's especially sharp in that area I know that for a fact... cut my finger upon first inspection thinking that it would be dull near the habaki... boy was I wrong.

Anyways I believe that this was done because the original purpose of this Ninja sword would have been stealth. Ala stealth kills usually involve the slitting of the throat. It also possesses a wickedly sharp tip. Overall: very well done, and very easy to handle.

Now for the part that you've all been waiting for. The much awaited CUTTING TESTS!

I started out with 2 water-filled gallons. This Ninja sword sliced cleanly through them and with very, very little resistance. Though I'll let the pictures speak for themselves. 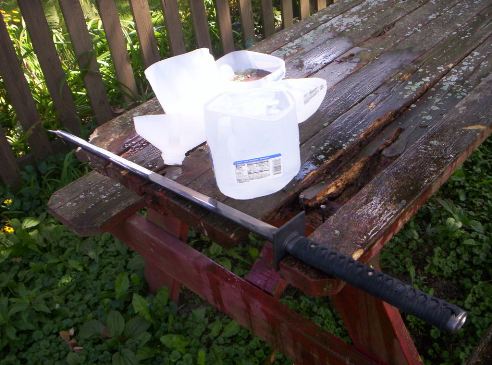 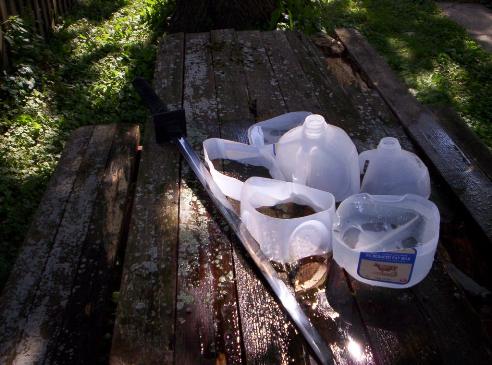 After decimating the gallons of water, I tried my hand at another classic cutting target. The ubiquitous water bottle!

Now the sword was able to cut through them, but with some difficulty. I batted the first one away though I believe that was due in part to my poor technique rather than the fault of the blade. Again I'll let the picture speak for itself. 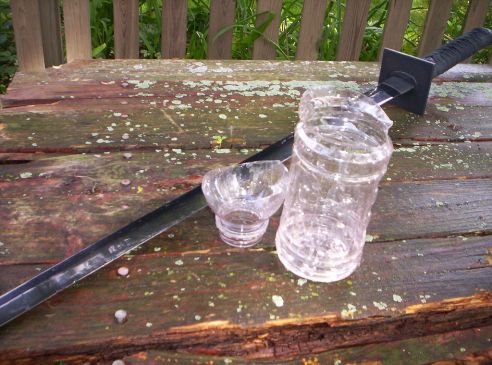 Oddly enough I was out of water bottles, and rather than take a trip up to pick n' save I decided on using a different target. One that is seldom used for sword cutting.. 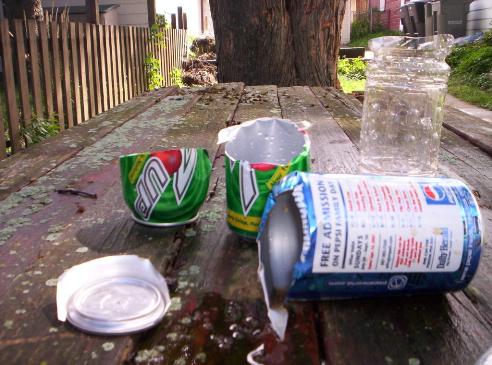 Not so hopeful, but then again a soda can isn't an ideal cutting target.

The Musashi Ninja sword: stylish and fun to wield, and while I consider the blade to be a little too thin for the serious cutting tests, and it's also extremely rigid.

Overall though I'm glad I bought it, and would recommend it someone who wants a sword that looks stylish and is fun to wield, I know that some of the tests are less than pleasing, I will man up and admit that it's more user error than manufacturing defect.

Because there's no way that I would have been able to slice through those water-filled jugs cleanly if the blade was dull, and for $75 it's a good value so I say if ninjas are your thing then go for it.

I'd go with Trueswords.com because at $75, you're getting a great deal. I've found it cheaper online, but some of the online vendors whom I've found aren't very well received. So I'd go with good ol' trueswords, and that's it for me.

Hope you enjoyed the review

Trueswords no longer stock this item, however we found it HERE at Kult of Athena for just $65.95 - making it even better bang for your buck than ever before. For the price, it is hard to beat.