Appearing in 2008, Musashi Swords quickly came to revolutionize and dominate the sub US$100 Japanese sword market.

Manufactured in:  Machine and Hand Forged in China

Despite the fact that they are made at several different forges, Musashi swords are generally quite consistently good quality – especially considering the extremely low price tags. As such they produce a range of extremely affordable light duty cutters/display swords all the way up to some real no frills workhorses – all branded with a distinctive double ‘C’ Ring Tsuba image either on the blade or on the habaki (blade collar).

It should also be noted that as the manufacturer/re-brander only uses SKUs – the names of each individual sword may well vary from retailer to retailer – despite the fact that the product is the same. 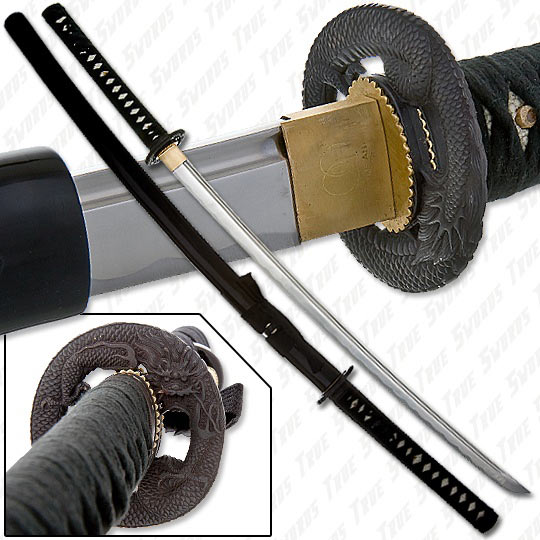 Made from 1045 carbon steel and monotempered with reasonably good quality fit and finish, Musashi’s entry level Lowest Price Katana range are hands down the cheapest “bare bones” functional Japanese styled swords currently on the market, typically priced at between $40 to $60 depending on the model.

While hardly appropriate for serious collectors, it is generally accepted that at this low end price point, they are worth every dollar and more. 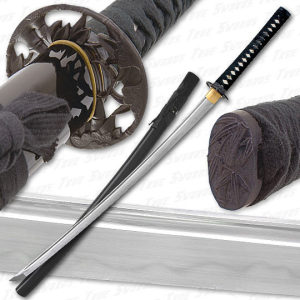 Using a propriety, time and money saving claying technique, these swords have a REAL hamon temper line at a price point where everyone else can only afford wire brushed psuedo hamon. Furthermore, fittings tend to be made of IRON where other similar priced swords use cheap zinc alloy – and are generally embraced by the sword community and great value for money lightweight, entry level cutters.

Swords at this low price point are rarely issue free, and Musashi swords are no exception – though reports from the sword community suggest they are surprisingly consistent.

This consistency however suggests that they are NOT hand made as advertised, but machine stamped – and it would appear that the biggest issue with these swords is misleading or mistaken marketing practices.

For example, the Differentially Hardened Katana swords are claimed to be made from 1060 carbon steel, however independent testing and basic wholesale pricing structures reveal that it is almost certainly 1045 carbon steel, a much softer – and hence easier to work with – steel.

WHERE TO BUY MUSASHI SWORDS

As they are low priced, they tend to sell out fast – though HERE at Trueswords.com there is almost always a good selection at exceptional prices. This sword seller also has a sterling reputation for customer service – the editor notes a Musashi sword purchased by a customer who discovered some serious flaws in his purchase.

Not only did Trueswords arrange a replacement, but they also shipped it out BEFORE the defective sword was returned along with a UPS shipping docket so that the customer could return the sword without having to be out of pocket even for a minute. Which is well above and beyond the call of duty…

Quite a detailed look at two typical bare bones swords. One was pretty much what you would expect for the price. But the other one more than made up for it.

Just goes to show you that there are still some jewels in the junk to be found. Average price $65

Simple, economical with a serviceable blade. $59.00

Only slightly better than any other budget 'Ninja' sword. $65

Not a bad attempt, even comes with a bonus (if flimsy) kozuka knife $54.95

Unique appearance, not a bad attempt for the money. $99.95

It handles okay. But more wallhanger than cutter. $54.95

I hope this information on Musashi Swords has been helpful. To return to the Sword Manufacturers Dossier from Musashi Swords, click here