The classic 'Longsword' or 'Bastard Sword'. With the same characteristics as the single handed Oakeshott Typology XV - the two handed XVa has a longer, narrower blade and grip for two handed use and were specialized weapons primarily designed to use against heavily armored opponents. Any type of period cross guard could be used, but type 8 (pictured) was the most common. Widely used and very common in the 14th and 15th centuries and frequently appearing in the fight manuals of Talhoffer, Ringeck and Fiore. 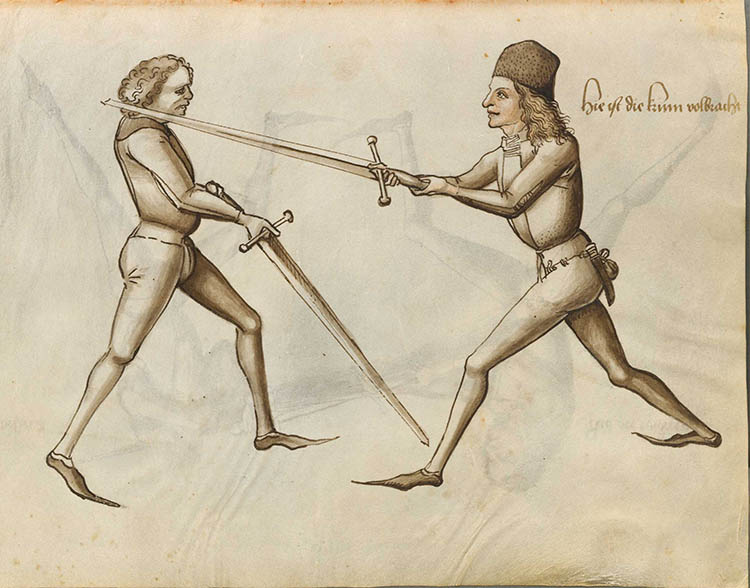 The Oakeshott Type XVa was a direct response to the increased use of heavier armor types in the latter half of the 13th century.

Cut orientated swords were unable to do much more than percussive damage to a knight encased in his suit of armor, and so a new approach was needed..

The Type XVa was one such approach - and was believed to have been developed side by side as armor improved, so that by the 14th and 15th centuries it was a common solution to the knightly 'walking tanks'.

With a long and slender, acutely tapered blade that could deliver a serviceable cut to lightly armored opponents, it was clear that with its reinforced tip, it was designed to pry into and otherwise pierce through the chinks in a knights armor to get at the soft tissue below - and you can only imagine the shock and pain a knight may experience when pierced by such a blade through the armpit or (gasp) groin..

There are quite a few Oakeshott Type XVa swords currently in museums or private collections, with the most famous example being the so called sword of the "Black Prince" Edward of Woodstock - so called because of the suit of black plate armor he supposedly wore at the Battle of Crecy.

They are also the sword type frequently depicted in the fight manuals of 15th century masters and can, in many ways, be classified as a 'classic' example of a Longsword.

Considering the popularity of this sword type, both historically and now among enthusiasts of the Historical European Martial Arts (HEMA) it should come as no surprise that these swords are well represented in the functional replica sword market.

Those sticklers for historical accuracy, Albion Swords, have no fewer than 7 Type XVa to choose from in their Next Generation line alone - and most other sword manufacturers attempt to make at least one type XVa, usually based on the sword of Edward the Black Prince.

The most affordable replica that has been through quite a few revisions since it was first released, it is a faithful recreation of the Black Prince Sword, though the blade is not quite as tough as other modern made swords and is actually similar to how the original would have been.

Another faithful replica of the Black Prince, but much tougher than the original ever would have been. I have personally tested this one against a dummy decked out in maille and it pierced the maille as if it was not even there, sticking deep into the base of the stand..

More historically plausible than historically accurate, Dynasty Forge's XVa is not based on any particular historical example, but captures the style and spirit of this blade type quite nicely and is a good choice for anyone who wishes for a type XVa that is not a copy of the Black Prince..

MyArmory has an excellent in depth article on Type XV swords and the sub-type XVa swords here which explains their history and lists some high end reproductions and images of actual antiques.