Type XXI swords include the the Italian Cinquedea and similar styled swords with longer, less broad blades but a similar profile. Typically outfitted with a curved cross guard and has multiple fullers. Another later period sword used in the mid 15th century - often gilded and highly decorated - as much a status symbol as a weapon.

The Oakeshott Type XXI Swords were civilian weapons of the early Renaissance period, and were as much a 'fashion statement' as a weapon.

Most (but certainly not all) were very elaborately decorated, reflecting the status of the owner, gilded with gold, precious and semi-precious gemstones and other assorted 'bling'. However, these were no mere ornaments.

Most were based on (or were) the Cinquedea - so named because it's broad base was the width of 5 fingers with hexagonal or diamond cross section, tapering strongly to form an almost triangular shape that was broad and strong enough to deliver fight ending cuts or wide thrusts deep into the internal organs of unarmored assailants.

Furthermore, because of their relatively short size, they could be used in situations where a longer sword would be a liability, such as fighting in close quarters, indoors or when ambushed in dark back alley..

As they enjoyed only limited and brief popularity in the mid 15th century, few surviving examples have been found.

The XXI is an interesting sword in that while most replica medieval swords have many choices at the high end, and few at entry level, type XXI is reversed, with all choices found at the entry level, while seemingly entirely ignored by high end sword makers (neither Albion nor Arms and Armor have ever made one, and do not seem likely that they will).

Perhaps it has to do with simple market economics - it almost costs the same to make a shorter sword as it does to make a long one, but people expect to 'pay by the inch' so when it comes to the high end, it will be continually overlooked in favor of longer blades.

But whatever the underlying reason may be - none of the high end makers seem interested. Fortunately for those looking to round out a collection, there are some options, though some are much better than others.

Cold Steels version of a Type XXI is not a bad attempt. Sharp, strong and decently made - the only real criticism is that it is a lot wider and more triangular in shape than the historical versions were, but otherwise is pretty close to the money on this one (and speaking of money, it is the cheapest replica out there of this type). 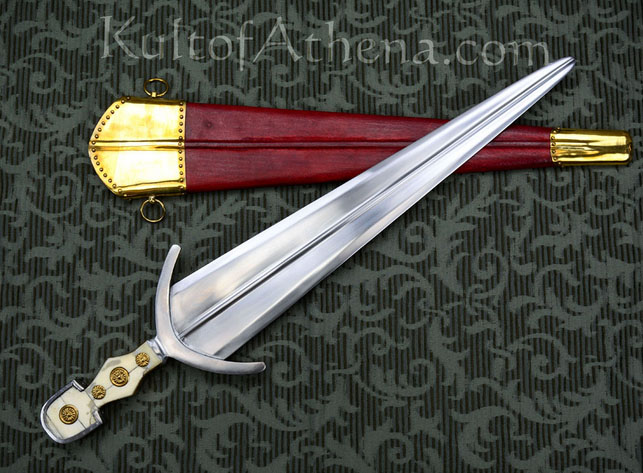 Another of the cheapest Type XXI replica is made by, not surprisingly, Deepeeka of India. However, while it conforms to the type in most respects the odd and uncomfortable looking handle - while based on a historical model - for the most part fall short. But with so few options available for this sword type, you kind of have to take what you can get (and it is an improvement on the earlier version, which was far too 'fat' blade wise)..

Thankfully, Del Tin saves the day and preserve their Italian heritage with their version of a Type XXI. Nicely shaped, with a beautiful wire wrapped hilt and attractive fittings, this one is the pick of the bunch and without a doubt the best current version of this sword on the sword market.

MyArmory has an excellent in depth article on Type XXI (and XXII) swords here which explains their history and lists some high end reproductions and images of actual antiques.