The Pugio: A Roman Dagger Review

While the Windlass Pugio is more of a Roman Dagger than a sword, as a civilian sidearm it was a common sight in the ancient Roman Empire. But as it was a longer blade than the typical backup dagger of the Miles Gregarius (common soldier or legionary)  and especially considering its extremely attractive price range - it deserves a mention.

Based on an antique that now rests in a UK Museum, this replica Roman Dagger may not be extremely historically accurate - but for the price it's not that bad either, and adds a little color to a Roman sword collection. 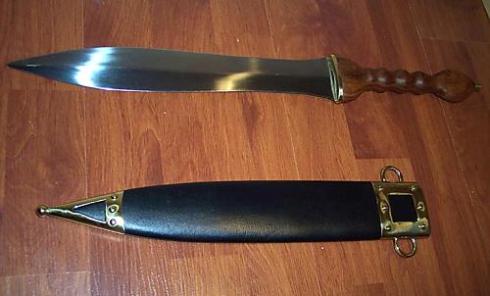 Okay, so to start off this is my first review and first blade. This is sort of my starter blade. 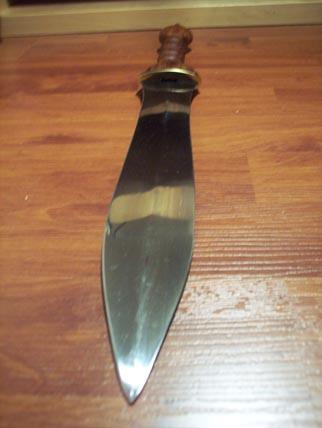 It's obviously simple with a wooden hilt and a short wasp waisted blade. Frankly I wasn't sure if I wanted to spend the extra cash on the Lakonian blade from windlass with the bronze (or is it brass?) handle.

It is one of the cheaper Windlass options, but I'm impressed. I love playing with this damn thing. And I wouldn't mind a bit beating it up, I think it would add character to it. It's not made to be fancy, it's all understated function in my opinion, but with a wonderful blade shape that I keep staring at.

Okay so I'm in love.

The blade itself is relatively narrow, at least in comparison to the Lakonian from what I can see. Now most of you guys are already well beyond the 12 1/2 inch mark of this Roman Dagger. It feels almost a little short when swinging, like you could use an extra inch or two.

With the wooden hilt, I think the balance is almost towards the middle of the dagger where the blade starts to widen. I think this gives you a bit more ommph when you swing into something with the extra mass near the tip (stabbing is more effective anyway I hear) - which probably the whole design concept of a wasp waisted Roman dagger is based around. Nonetheless, as you'd expect it's light, a dream to handle. Very agile, but it is also short so a lot of that is to be expected. 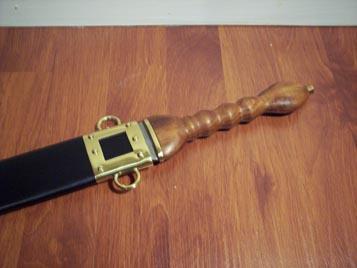 The tip I need to do a little work on with a stone as it's not quite right. The symmetry of the tip is slightly off, one edge rounds more towards the tip than the other. The effect looks almost like the tip is very slight leaning in one direction more than the other. This is all noticeable after a good glance to me, doesn't bother me too much. The handle is good for big hands. Plenty of space and an easy grip. Might be too much space for people with small hands.

End result: I'm happy. I like the wooden hilt after seeing it in person, and I like to think that's more historically accurate for the roman period. If you're a wasp waisted blade fan this is a good option for a beater.

There are other Pugio's out there with a lot more detail, but this is the one you would want to use I think. It's more half sized Mainz Gladius than Pugio. If you're into re-enactment I have NO idea if this is accurate for you, but to my mind the wooden hilt is going to keep you in good stead.

As always with Windlass, so I hear, pretty good quality for the price tag. I can't argue with that here. I love it any rate.

The Roman Pugio is exclusively available HERE at Museum Replicas Ltd where it sells for $95. You can save an extra 10% with the SBG/Museum Replicas discount coupon code: SBGVIP

I hope this review of the Pugio Roman Dagger has been helpful. To return to Modern Replicas of Ancient Swords from The Pugio: A Roman Dagger Review click here