Clean Rust Off a Sword, a How to Guide

It is not that hard to clean rust off a sword, though it takes a fair amount of time and good old fashioned 'elbow grease'.

In this tutorial we will show you how to take a sword that has developed a nasty patina with pitting, and clean it up as best as possible like the before and after pics below.

The example sword we will be using is an antique Swedish military saber that one of our SBG members purchased with the intent to restore it - polishing up both the blade and the brass guard, and showing you how to get rust off a sword and its fittings if you are willing to put in the time required.

Hopefully your sword will not have to get as much rust off a sword as in this example, for the entire surface of the blade was heavily rusted - but the basic techniques are the same regardless of if it is the whole blade or a one inch spot. So from here I will let SBG member Bushido tell his story - and will be adding in the appropriate additional needed information and techniques so that you can achieve the same result.

Bushido's Story & the techniques used to clean rust off a sword: blade & Fittings

If you want to clean rust off a sword that is an antique, be certain that it is not a rare or important one and do not attempt to restore it yourself without being fully aware of its value, and that any attempts to polish it up may completely destroy its value. This is especially true for Japanese swords, as the patina - especially on the tang - is PART of its value, and if cleaned off can make it almost worthless.

Thought I'd share my latest project. I was recently promoted to Sgt 1st class (NCO of the Swedish Airforce) and as a kind of commemorative gift to myself I bought me a Swedish officers sabre model m1893. It was made by Erik Svalling, son of Gustaf Emanuel Svalling, most likely sometime around 1900, and originally intended for cavalry officers these sabres are nowadays used by the airforces officers and NCOs for parades etc.

I found my sabre at an auction house, and it cost me roughly $350. Sadly it wasn't in the best condition, and since I plan on wearing it for a wedding ceremony this summer I need to give it some TLC and make it look presentable. I realise by doing so I will most likely reduce the value of the sword, but since I'm planning on using it rather than selling it (and since it's only a massproduced semi modern sword and not a priceless antique) that doesn't really matter.

What matters more is that it looks presentable, and I fear that if left in its current condition it will most likely deteriorate even further. Anyhow, here are some pictures of the sword in the condition it was in when I bought it: 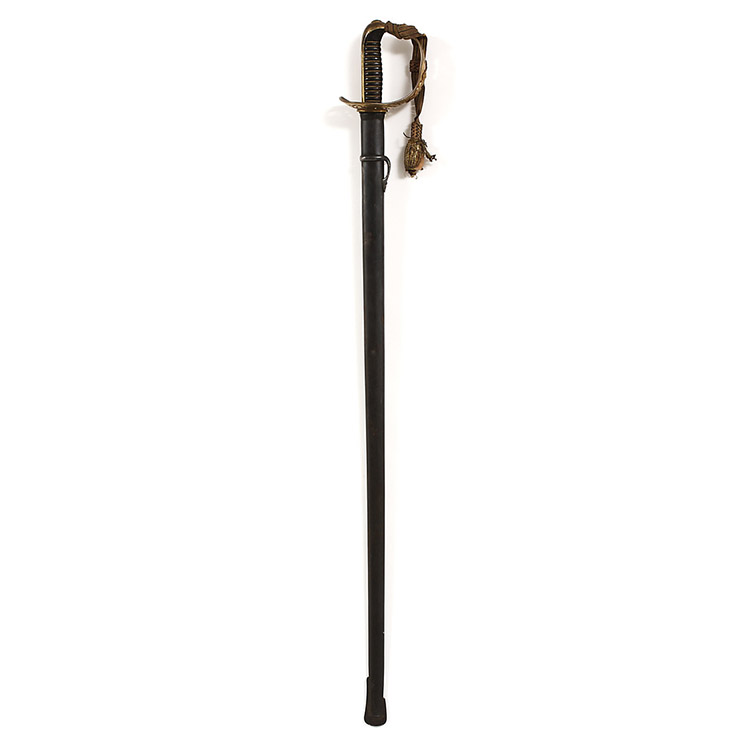 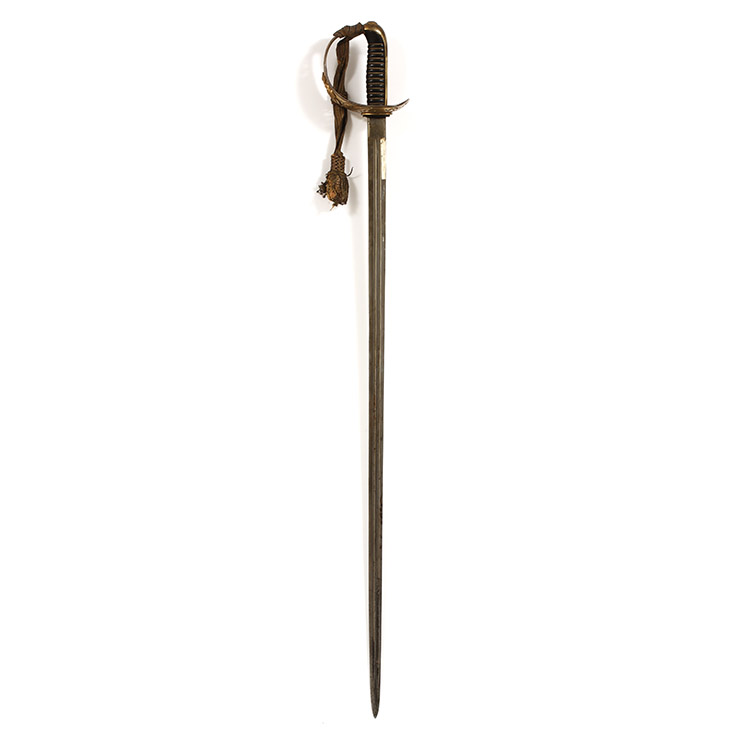 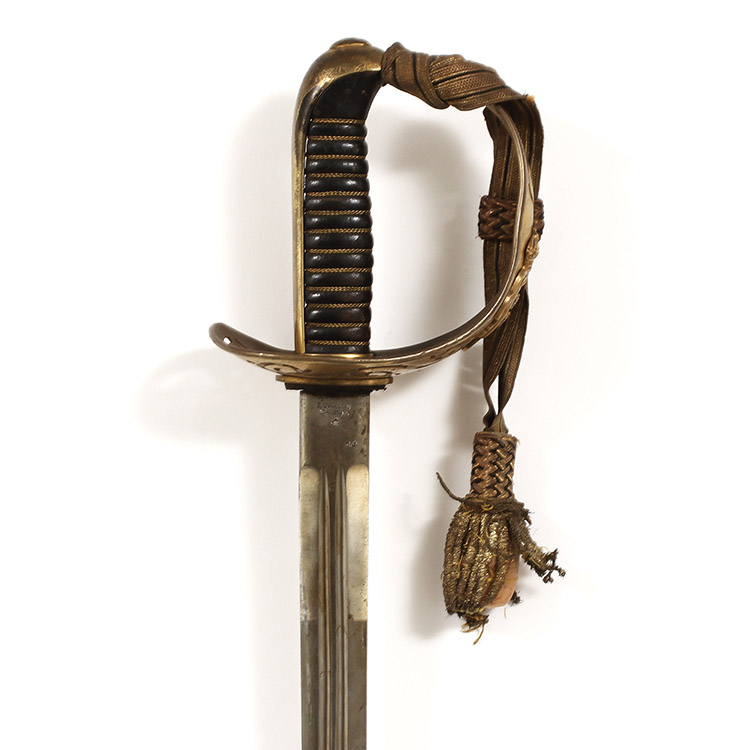 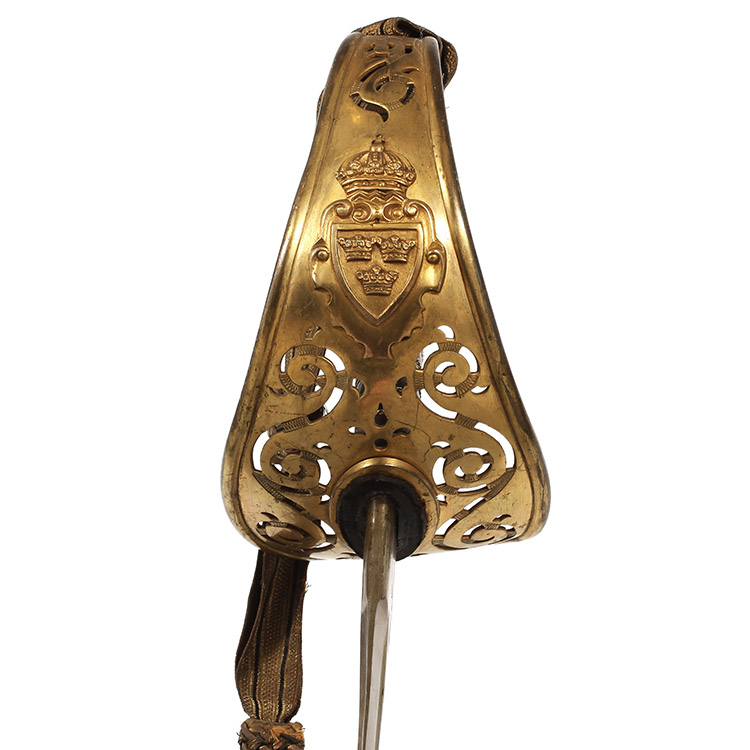 The handle is in decent condition, some nicks and bends in the guard plate but in total ok, although the tassel is in really poor condition but I would've had to replace it anyhow due to the fact that it's golden and not silver as would be NCO standard.

The worst part is the blade sadly, quite a bit of rust and pitting in the area around the tip... Around a third of the blade is affected with the rust lessening towards the handle. This just won't do for celebrating a wedding, and to know how bad/deep the rust really is it has to be removed so I know how much of the blade will have to be reground. I started by wrapping the blade in rags dipped in a weak rust eating acid. 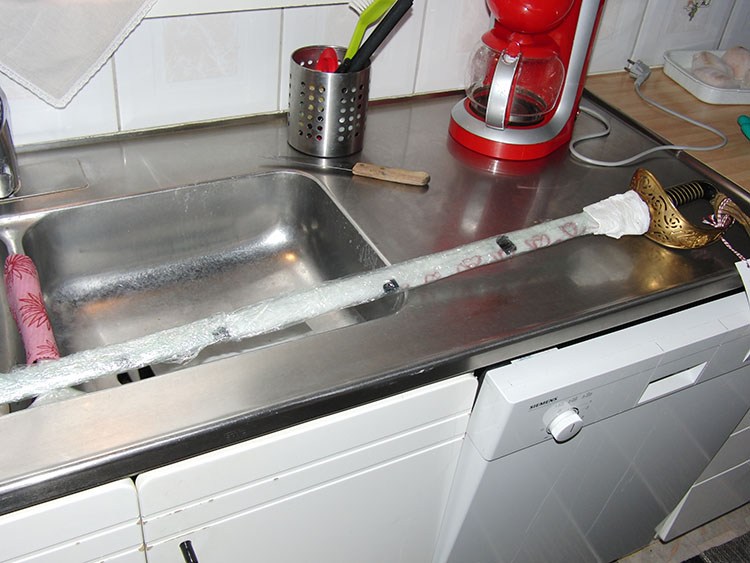 Rags dipped in vinegar, or lemon juice will do the trick

Sometimes mild acids like Vinegar are all that is required to remove surface rust. The video below shows the power of Vinegar on a rusted diving knife..

This method works especially well for red rust without surface pitting. In Bushido's case however, it just revealed the extent of the rust - and it was a lot worse than he first thought..

This revealed deep pitting and scarring and a lot of pores in the front portion of the blade, and some along the length of the blade further up as well. To be honest it was worse than I had imagined, but too late to turn back now... 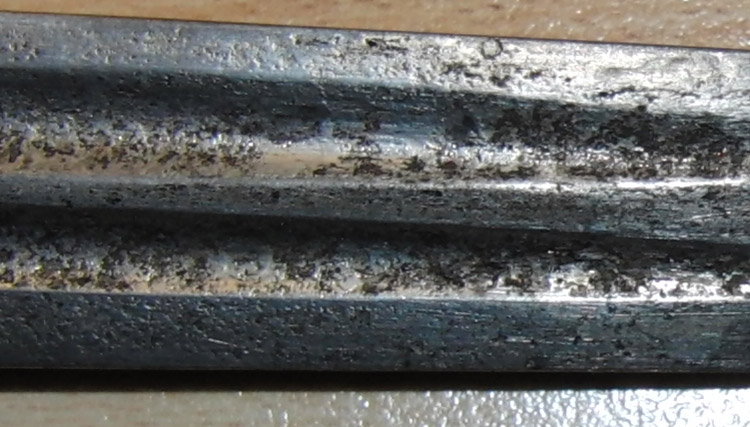 Since I don't want to remove more material than necessary, all of the work will be done manually on this sword. Time to bring out the sand paper... Spent about six hours gently sanding away the worst rust and scars, and the result is as follows:

With each grit, you must not sand in circles but in one direction - then change the direction for the next grit so you can see what you have done previously

In this case, it took 6 hours to manually clean the rust of a sword - but the entire length of the blade was rusted, and quite badly pitted too. To ensure an even finish, you probably will want to polish the whole blade - in the link above there are also techniques on how to speed up the process using a belt sander - the only downside of which is that you may remove more material from the blade than originally intended.

It takes a long time, but the end result is worth it as you can see, and it can get even the most stubborn rust off a sword.

If it is only a small spot, there are some alternative products you can try - Flitz metal polish is excellent - and combining it with a rotary hand tool makes it all happen much faster.

Anyway, back to Bushido's story..

As you can see I haven't been able to get rid of everything just yet, but at least it's coming along. I'm currently debating with myself on whether it's better to leave the deepest pores and maintain as much material as possible, or if it's better to go all out and grind away every last trace to hinder the rust from returning.

Thing is removing all of the rust down to the deepest pits might mean changing the geometry of the blade, and I'd prefer to keep it as close to original as possible... Luckily my sabre is of the blunt unsharpened kind used for parades (many of these were sharpened prior to WW1), so there is a bit of spare material. But it's not infinite I'm afraid...

Now then, back to work on my own sword. The guard is next up until I can get my hands on some medium grit wet sanding paper to continue work on the blade. My sword seems to have led a rough life as the guard plate was badly bent out of shape when I got it: 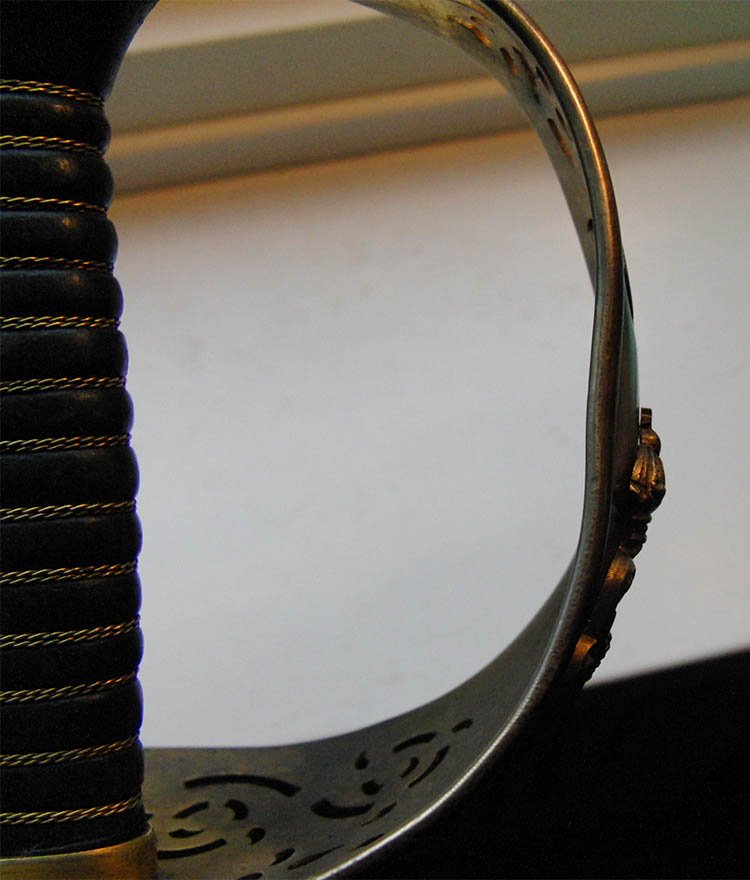 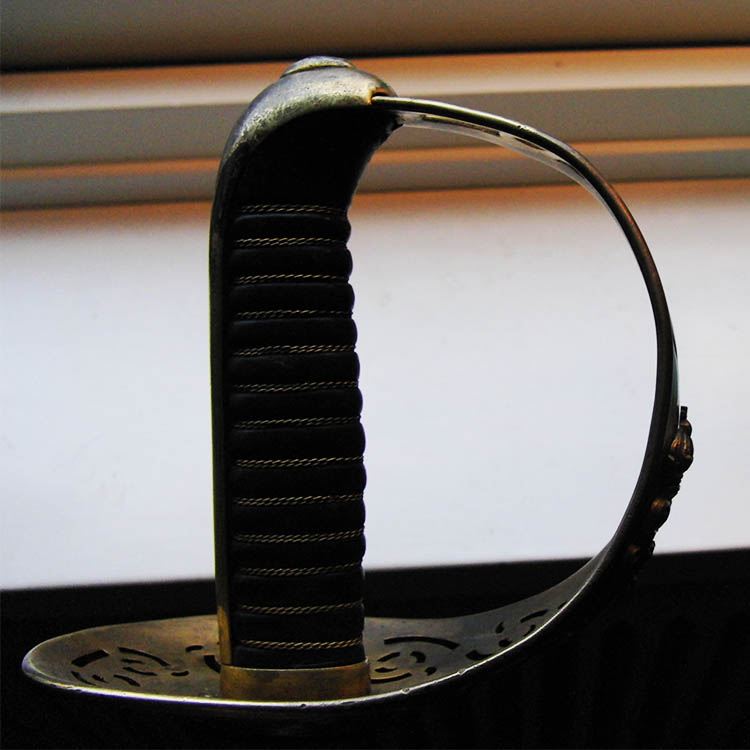 It's still not quite perfect, but I didn't dare go beyond this point from fear of weakening and cracking the metal from shape hardening... It'll have to do, I think it looks better than before at least. Now for the polish.. 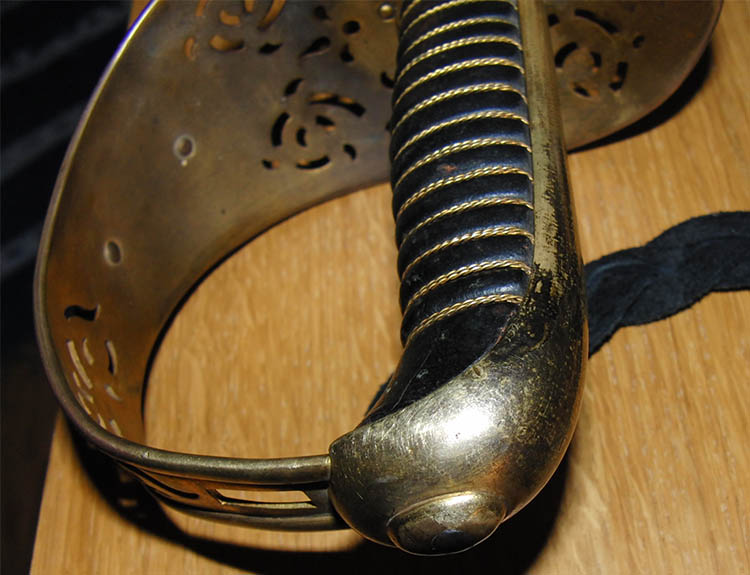 This is actually very easy to restore a nice shine to the brass fittings of a sword - all you need is one product - Brasso! Here is the result.. 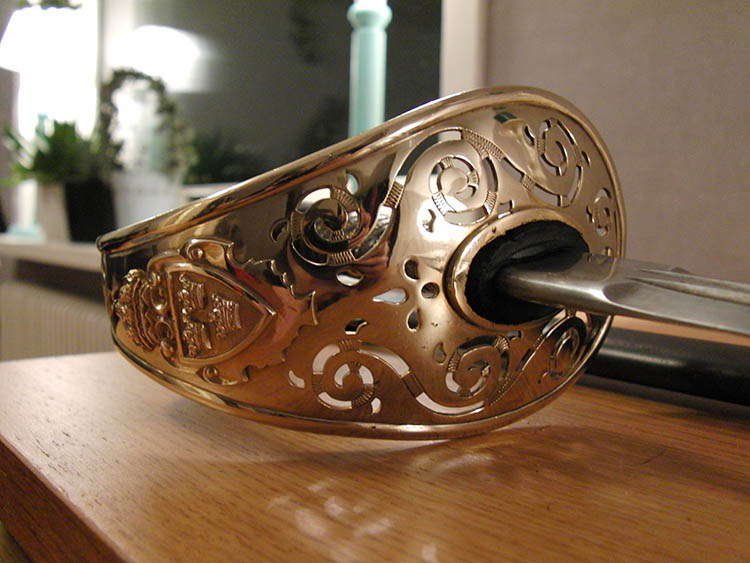 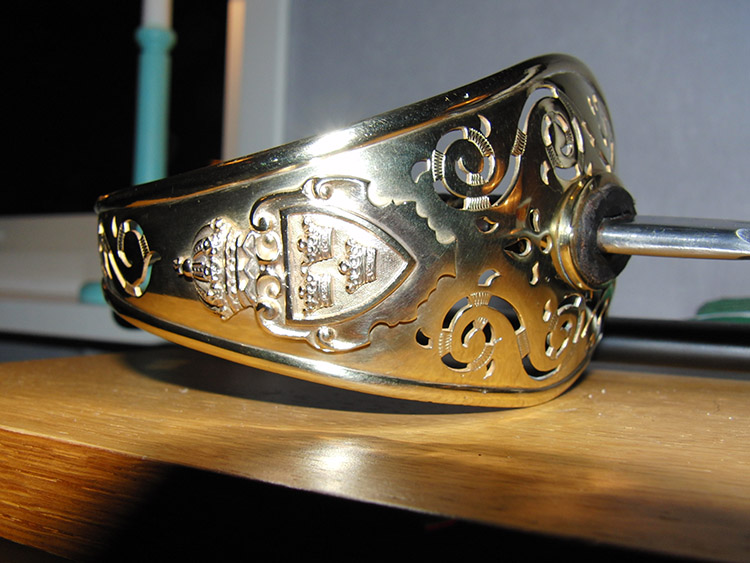 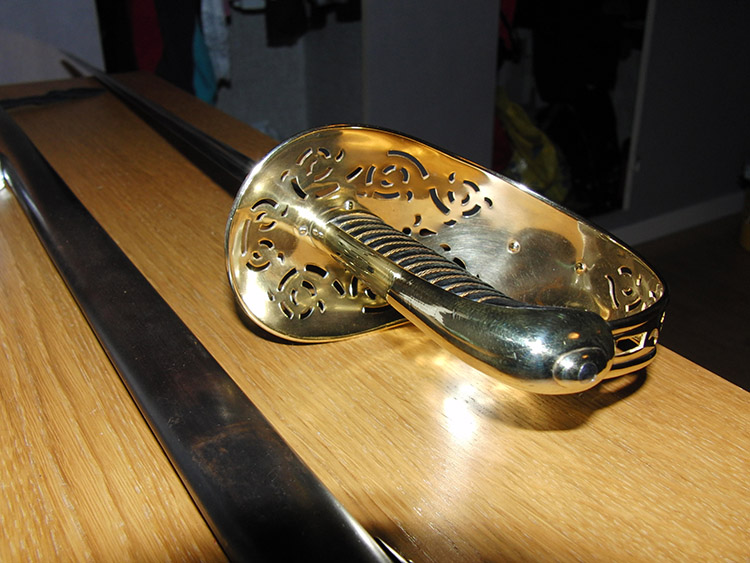 The final step now was to use a product used to get the deep rust off a sword in the areas where the sanding cannot reach - though for surface rust in some cases this product alone will do the trick..

I am talking of course about CLP break free (Cleaner, Lubricant, Preservative) - here is the result.. 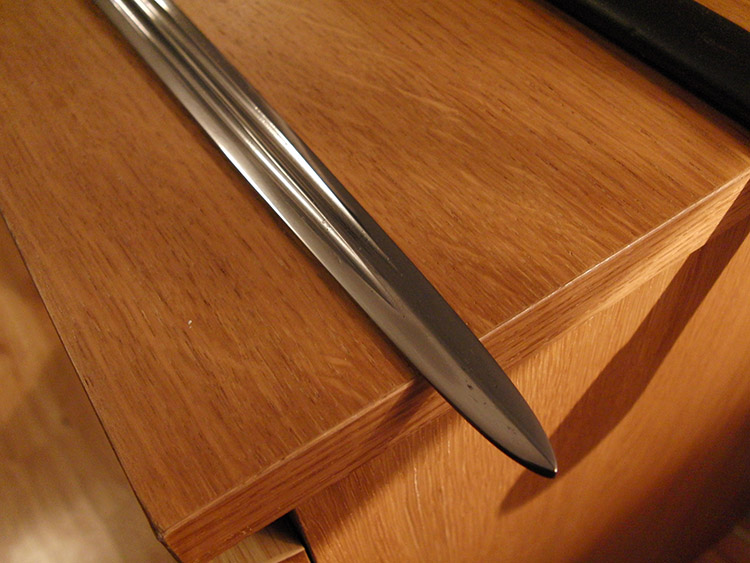 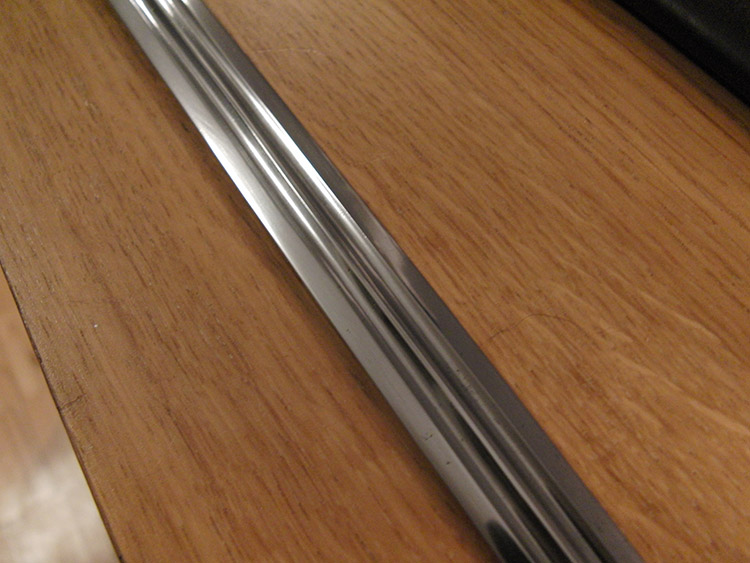 What do you guys think? :) Personally I'm rather happy, it feels like a completely different sword from the one I brought home from the auction house.