The Sticklestad sword by Windlass Steelcrafts is probably my favorite Viking sword of all time. And coming from someone who LOVES Viking swords, that is saying something.

But it's not just the ultra strong, durable blade or fantastic handling that I love - it's also the price.

I have to admit that my initial impressions of this sword were somewhat mixed, it wasn't love at first sight - it took some time to grow on me..

Overall though, I could not deny that the Sticklestad sword it is certainly quite an attractive looking piece.

The scabbard is wood, lined with brown suede, something that does suit the sword, but not something I personally like (maybe it's just me, but I don't really like Suede on my swords). The chape, mouth and reinforcing rings are all carbon steel and look good, but somehow a bit too modern and more appropriate to a 19th century saber and not at all historic.

However, structurally the scabbard as solid as a rock and while it isn't really to my own personal taste - it is definitely one of the better scabbards I have seen on swords at this price point.

The hilt of the Sticklestad sword is stunning. (Well, except for the suede handle wrap, but I think I've made by point about that...) 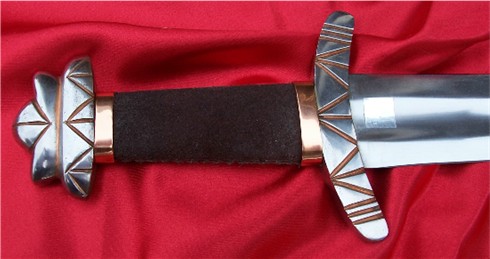 Most pics of the Sticklestad sword on the internet simply do not do the fittings justice. 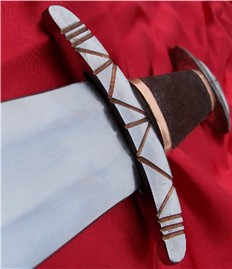 The cross guard and the pommel have angular runic style copper inlaid carvings and set this sword off perfectly. Indeed, even though the pics taken here come closer to showing the classical Viking style of its appearance than most others on the net, you really do have to see it in person to appreciate just how nice it looks.

At both ends of the handle, there is a copper reinforcement which does suit the sword, but I am in two minds as to how well. The tone is just slightly too bright compared to the rest of the fittings.

Structurally though, the hilt is extremely well done. Everything is tight with no rattling or movement, and is bit enough to fit my hand like a glove - especially when used in a traditional handshake grip but even a hammer fist grip is quite comfortable and not constrictive like many others. 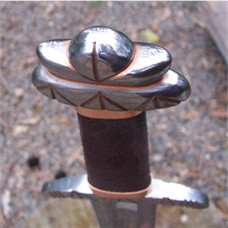 From a structural point of view though, the highlight would have to be that the whole assembly is peened together with the peen visible on the middle lobe of the pommel. A little rough perhaps, with obvious hammer marks, but I feel this gives the sword some character (I am not a fan of the perfect modern CNC milled look!).

All in all, I was extremely impressed with how this sword has been put together, and while it was hard to put my finger on the aesthetics that just didnt quite gel, though I think that if the suede was a little darker, it might look better. 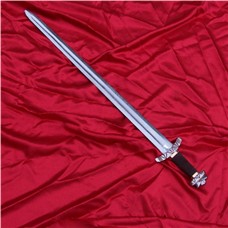 Weighing in at 2lbs 8oz, it doesn't feel heavy but you can definitively feel the blade's presence.

A Viking sword of these proportions and this weight would ideally have a point of balance around the 5" mark, though of course, some variations are possible and balance is often a personal preference more than anything else.

In the case of the Sticklestad sword, the balance is around the 6" inch point.

Combine the weight and balance and you get a sword that handles reasonably close to the historical originals with good recovery times.

Overall, I really like the way this sword handles, and it certainly helps to alleviate the myth that all Viking swords were huge, heavy lumbering blades designed to be weilded by superhuman Nordic gods!

The 31" blade of the Sticklestad sword is, in my opinion, one of the best Windlass has ever made.

Forged of 1060 carbon steel, there are some irregularities and waves in the surface of the blade that lets you know it has been hand forged. And the ¾ wide central fuller is, for the most part, straight and even though it wanders off center slightly towards the tip.

However, what I like most about the Sticklestad sword is its rigidity and tempering. It certainly doesn't suffer from the infamous Windlass whippiness many models designed around the same time did. But neither is it overly stiff. And as you can see from the video below, it has the amazing tempering that Windlass is so well known for.

Pretty much a perfect temper

I have owned more than one Stickestad. The first one was purchased in 2007 and had a very poor sharpening job, and the original review made no secret of how bad it was (Windlass swords by default come with an unsharpened 1mm edge - but an optional sharpening service is usually available for around another $18 or so).

My review prompted the sharpening service to be revised, and the second sword I received was a LOT better.. (always nice to know SBG makes a difference!).

To give you some idea of how poor the first sharpening service was, check out the video below.

Cutting with my first Sticklestad, which was not sharpened properly

I probably should have stopped there, hitting a water bottle full force that does not cut is actually an unintentional durability test (if you've ever 'baseball batted a water bottle, you'll know how jarring it is!). But the sword held up fine. So to heck with it, even though it was not sharp - the blade geometry was pretty good and I thought might just do the job...

You never know until you try, right?

In truth, considering just how blunt this sword was - it darned well nearly cut right through the mat..

So it was time to take it to a new level with some hard core durability testing.

It seemed that the Sticklestad sword was extremely well built! A true beater, yet it does not or handle like one - which makes it even better..! 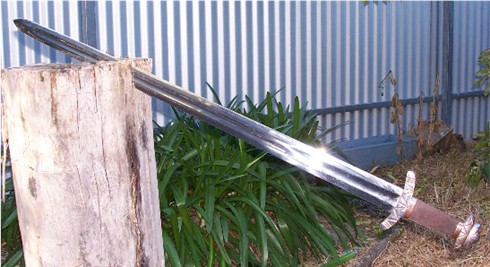 Now if the review was to end here, we would never have the full story.

The Sticklestad is attractive, low priced, handles extremely well and is tough as nails. But the sharpening issue held it back..

However, the original review prompted an overhaul of the sharpening service itself, and I was kindly sent me a second sword free of charge to test it again and see if it had been improved.

It was immediately apparent that the sharpening service was dramatically better. So I tested it on a variety of targets, and well, I'll let the video show you the difference.

This was a HUGE improvement - like night and day - and it took the Windlass Sticklestad sword to a whole new level..

Finally, it was complete. And when you combine all the factors it has with the sharpening service - maybe now you can understand why I love this Viking sword more than any other..

The best price on the Stickestad sword is direct from the manufacturer HERE at Museum Replicas Ltd where it sells for $269.95 but can be brought down to $242.95 with the 10% discount coupon code