If you are in the market for a replica of Strider's sword that is something more than just a stainless steel decoration - we have some good news for you. The Darksword Amory Ranger and Anduril Swords are back - and better than ever..!

Discontinued for several years (the earlier version was reviewed here), it's disappearance left a hole in the market for a functional lord of the rings sword that no-one else could fill.

Of course, what most people don't realize is that behind the scenes, making a functional replica of any 'movie sword' (for make no mistake, this lord of the rings sword is based on the movie, not the books) can run a sword maker into all kinds of copyright issues.. And while I can only speculate that is why it was originally discontinued, if so they came to some kind of agreement with the license holders - and when you see what the current version of this sword is like, we can only be thankful.. 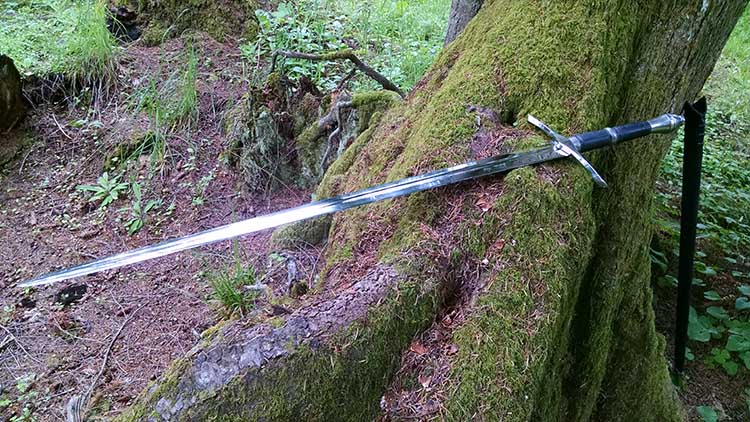 Anyone who has seen The Lord of the Rings trilogy knows about Aragorn and his ranger sword. I have had a fascination with that sword since I was about 10 and saw the movies for the first time. I finally purchased the Ranger sword from Darksword Armory after years of stalking.

The sword came nicely packaged in a cardboard box.

t did not rattle or shake inside the box. I do have to say, that from Canada, shipping was surprisingly quick. I believe it took 6 days to be shipped from Canada to Oregon. Upon opening the box, I found, between crumpled packing paper, the Ranger wrapped in layers and layers of shrink-wrap.

The sword was wrapped separately than the scabbard for shipping, and each was well packaged.

Naturally, I was ecstatic to get the sword unwrapped. The shrink-wrap came off easily and soon I had the Ranger in my hands. 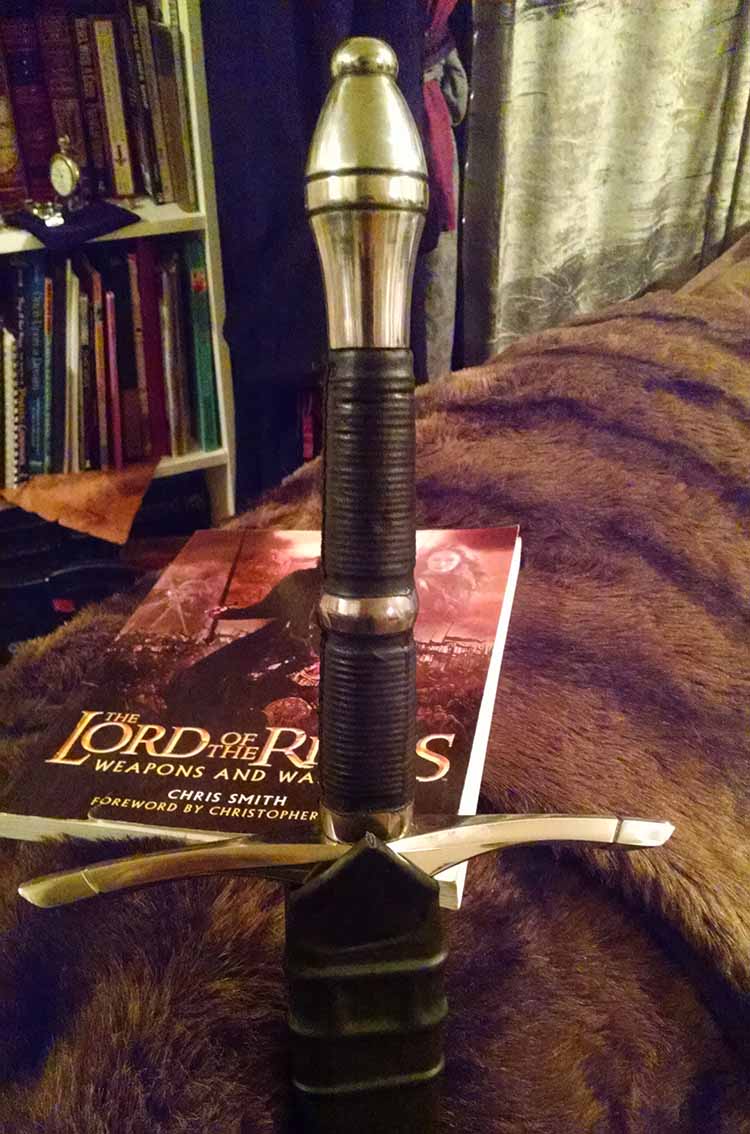 The blade came in a thick coat of oil to prevent it from rusting. I was immediately impressed by the craftsmanship. Upon handling the sword, I was impressed by its weight and power. This sword is capable of devastating cuts and blows. 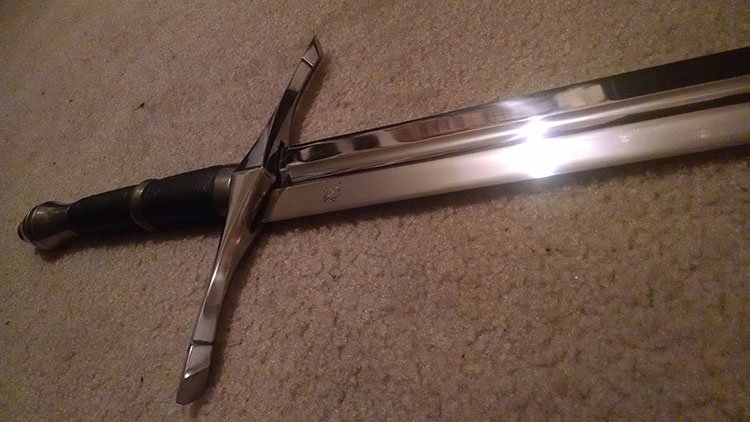 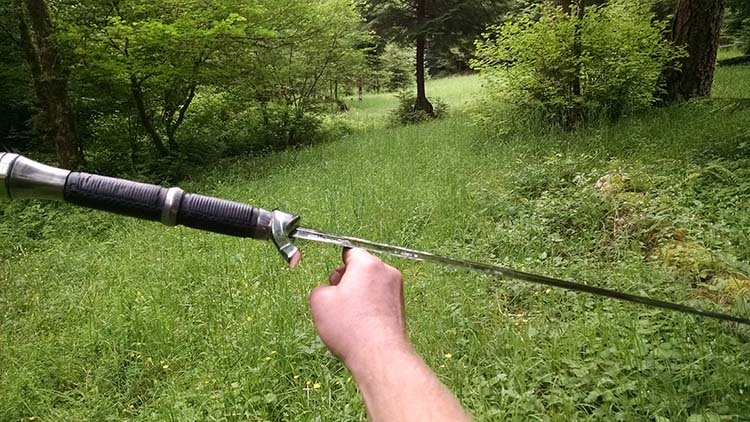 Trying to balance sword while taking picture is kinda hard... 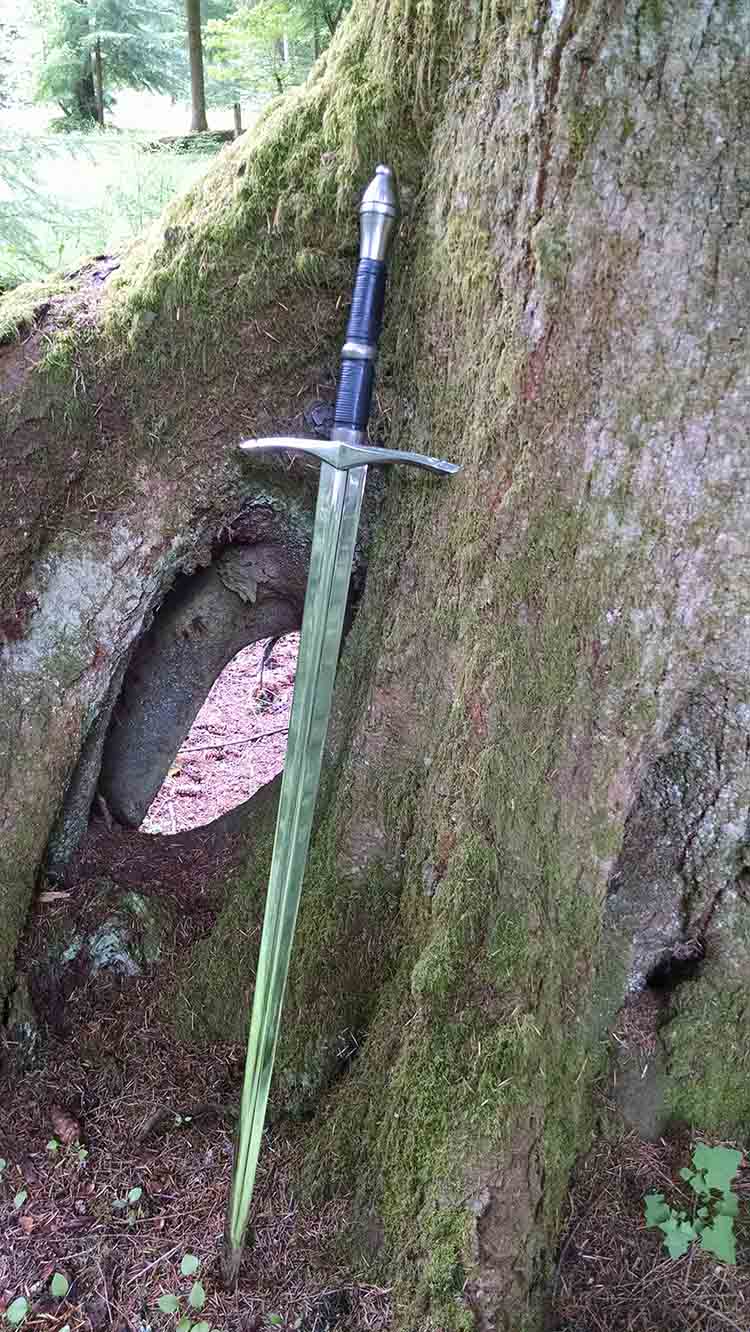 The blade is made of Darksword’s new choice of steel, 5160 and dual tempered. The blade aesthetically is nothing short of beautiful. It is just below a mirror finish polish. 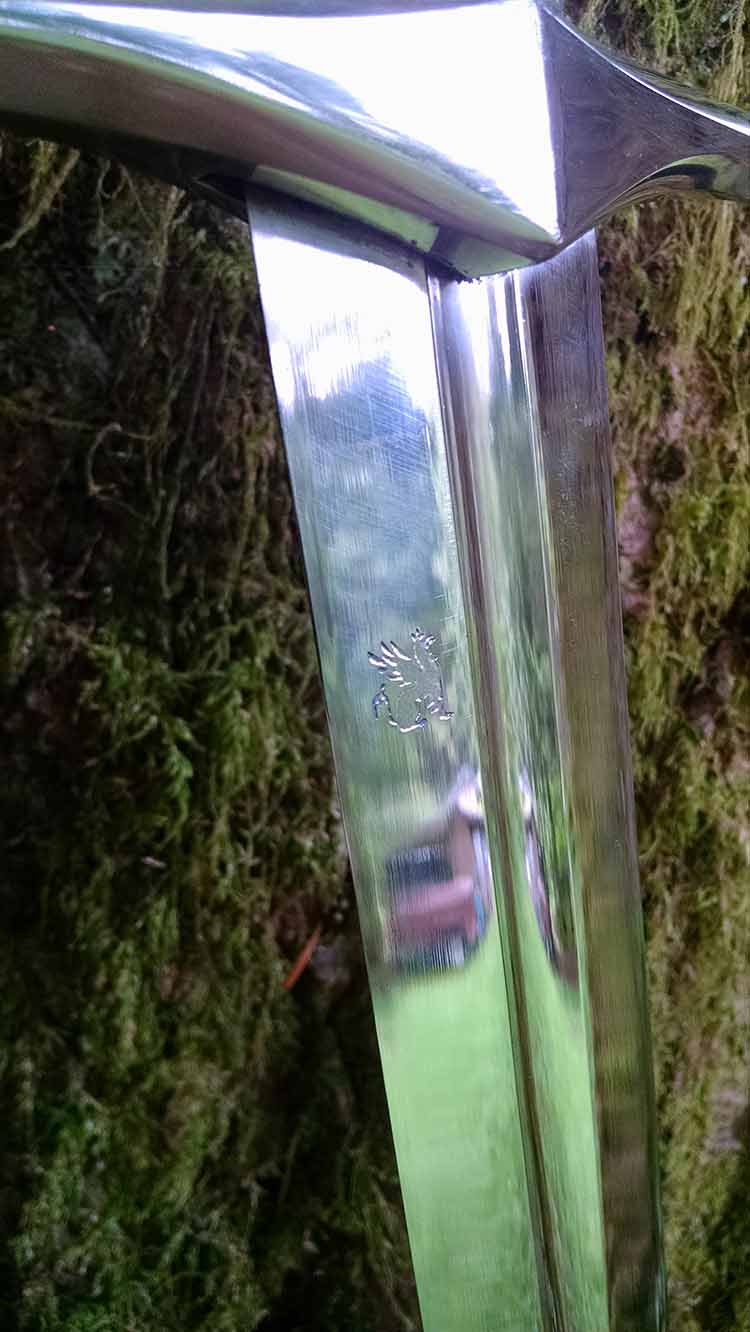 Surprisingly, I found that the blade actually tapered more than I was expecting. I think this is DSA attempt to create a more historically accurate blade on a fantasy type sword. Because this sword is hand forged, hammer marks are faintly visible when you look directly up the blade. This is to be expected on a sword in this price range. However, it does not detract at all from the finish.

The lines are straight, the edges are clean, and the grind lines are almost nonexistent except right up against the guard. The Darksword Armory emblem is small, but not distracting. The blade is impressively hardened and tempered.

A quick flex test revealed that the videos posted online are not a hoax. The blade flexes impressively far and returns true. Despite all of its flex, I would not describe the blade as “whippy.” Overall, the blade is excellently crafted and heat treated incredibly well. 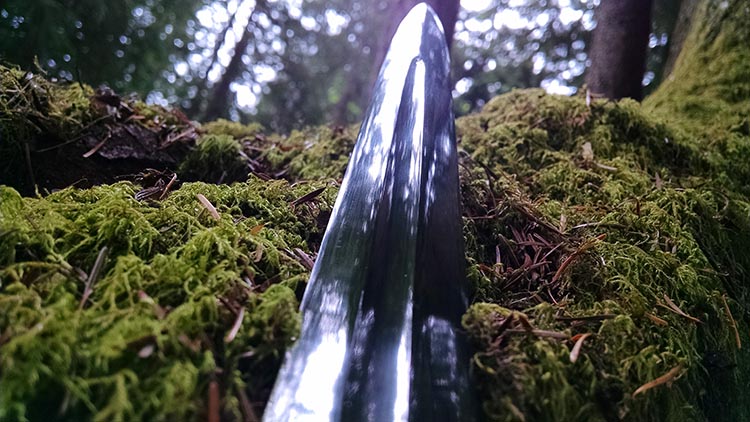 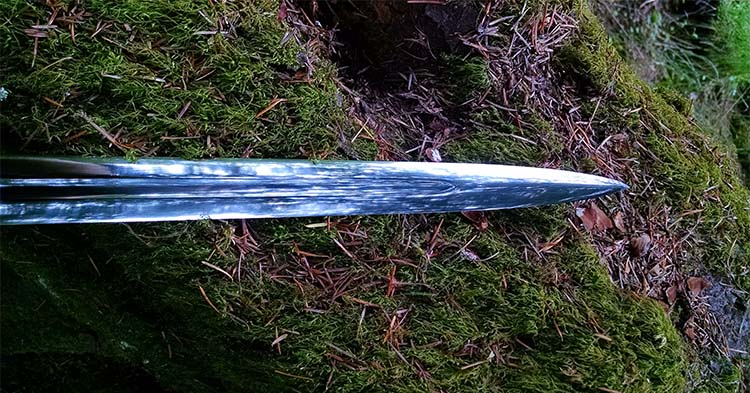 I did notice that the sharpening service left evidence of a sharpening line consisting of about 3 inches on one side of the blade towards the tip. Otherwise, there is not a trace down the rest of the blade. 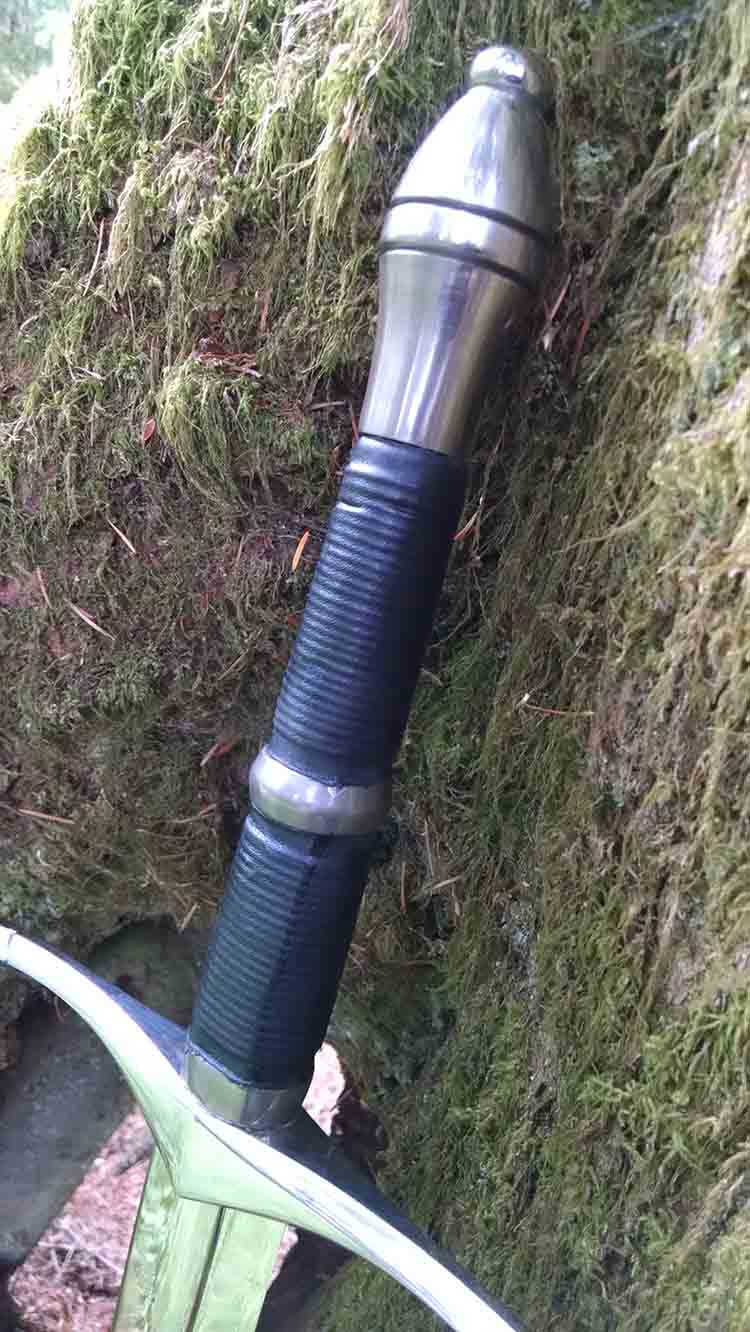 My first thought about the handle was that it seemed a little thick. I have big hands so usually I find a sword handle to be on the thin side, so this was a surprise. This is not to say that it was comfortable after a little handling. It may take some getting used to, or I may just sand it down and rewrap the handle later. 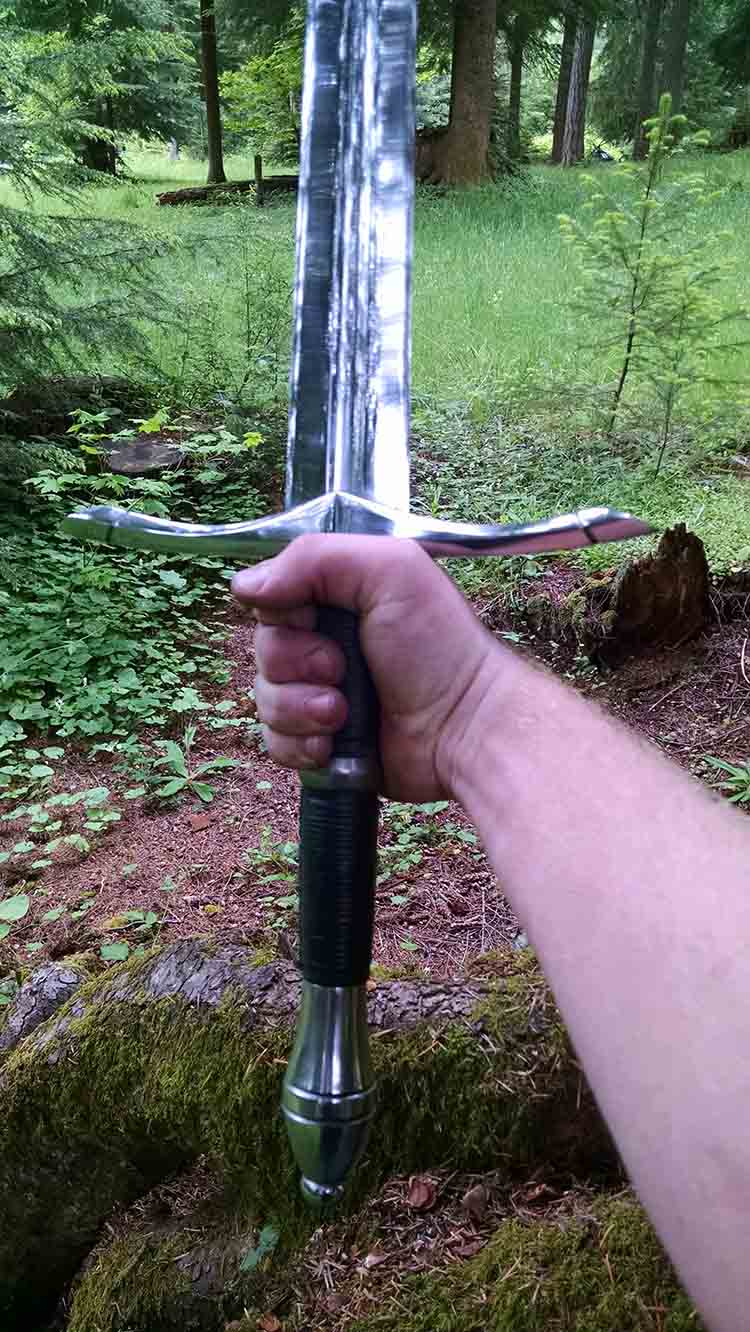 The handle is separated by a ring in the middle. According to DSA, this is a little way to incorporate “The One Ring” into the LOTR inspired blade. I found that it gives the sword a little added character in the grip. It also runs true to the Peter Lyon version of the sword. While examining the ring, I found that it dipped off to one side. While my OCD focuses on it, I know that it truly does not take away from the look of the handle. You truthfully can’t even tell unless you are looking for it. 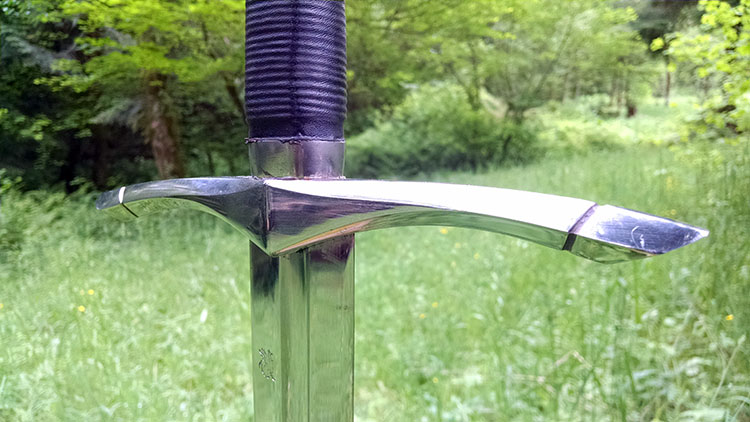 The guard is one of my favorite things about this sword. There is just something about its simplicity that is beautiful. The curved quillions are elegant, but with no unneeded embellishments. It is large and wide. Perfect for keeping the user’s hands safe from dueling swords. Close inspection reveals the grinding lines, but only if you look very closely. The guard is polished very, very well and displays and impressive finish. This part of the sword is very similar to the movie version of the sword. 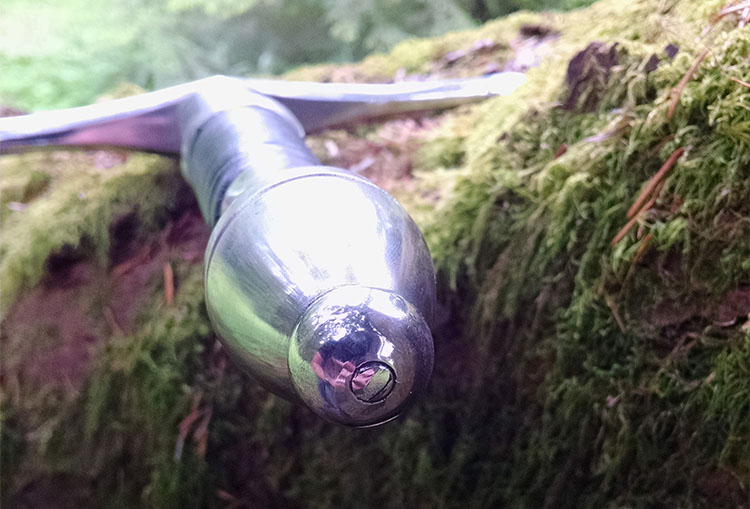 The pommel of the Ranger is large and heavy. I read somewhere (before they were peened) that the pommel was over 1 lb. The best thing about that large pommel is that it balances the sword and brings the P.O.B. back inches from what it would be with a smaller pommel. I am sure that in dire circumstances, the pommel could be used as a blunt weapon capable of breaking a nose or even bones. I also found that it was very comfortable to grip the pommel for a little added control while swinging the sword. 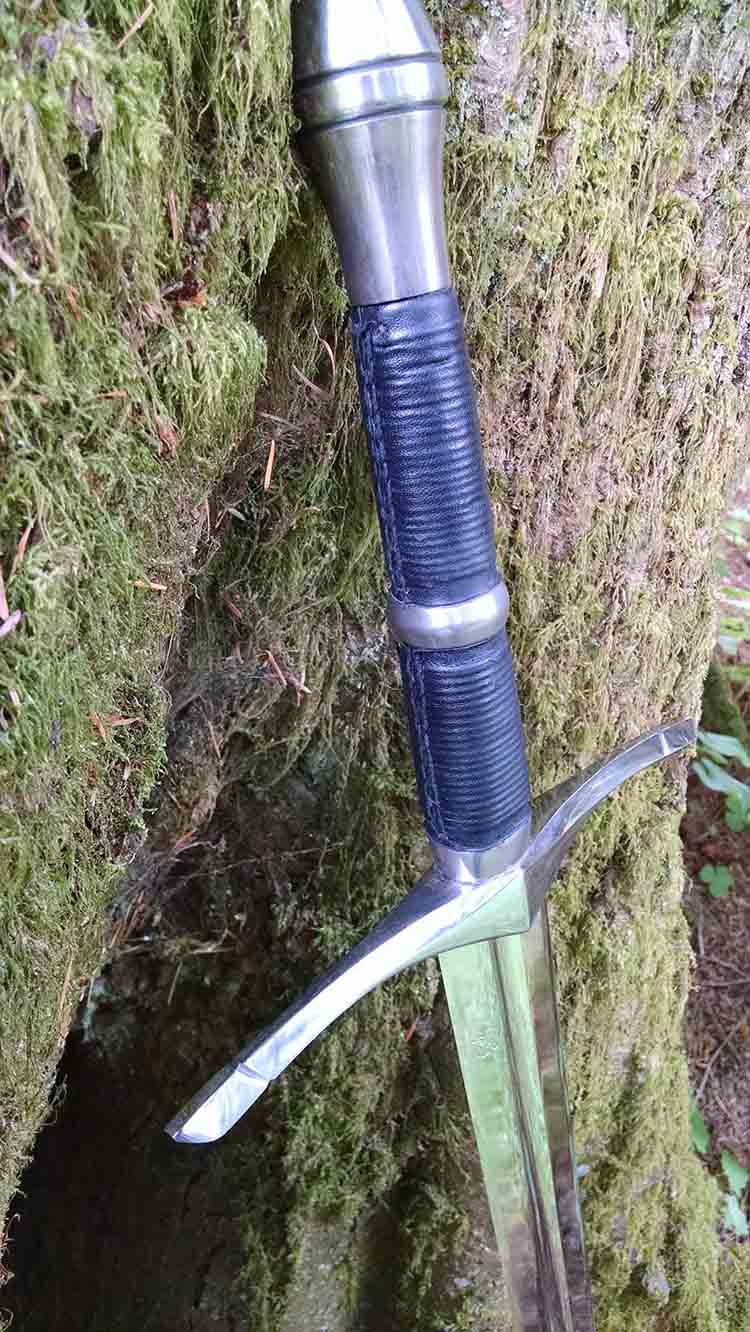 The grip is wrapped in nice leather and has the marks of twine wrapped leather to give it added texture. It is well wrapped. The stitching had a few long threads on the ends which I quickly removed with a pair of scissors (lame). I will probably end up rewrapping it down the road just for a different color, not because of quality. I have no doubt that it would hold up for quite awhile just due to the quality of construction. 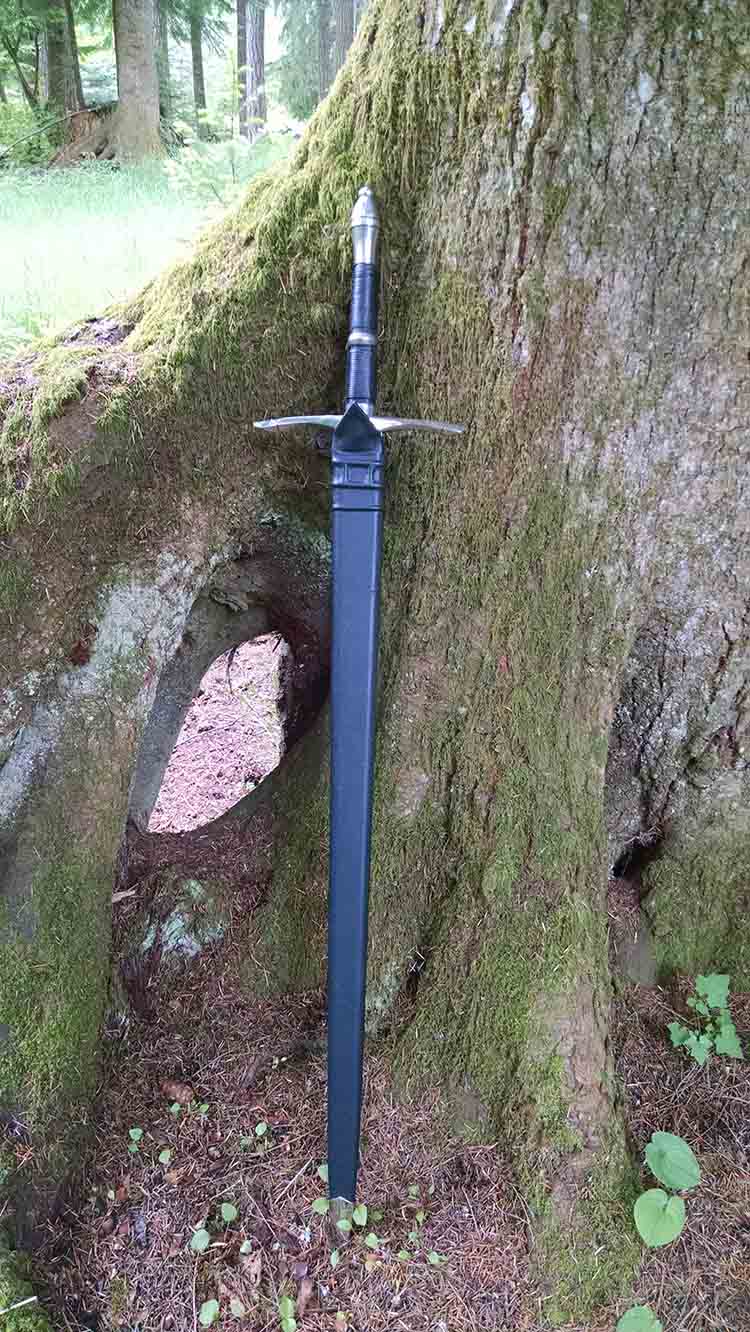 This is the new style of scabbard from DSA. It features the triangle strips of leather at the top which flap over the guard when the blade is fully in the scabbard. I believe this is historically accurate if that applies to this fantasy category of sword. I think it goes to show the progression of Darksword’s care in applying historically accurate details to their products.

The chape is simple and functional. The scabbard also features a riser pattern at the throat which adds a little style to an otherwise very bland, but functional scabbard. True to my OCD-like tendencies, I noticed that the risers were not straight on the scabbard. It was if they were rotated counterclockwise 10 degrees.

I found that when I slid the sword in, it fit, but not snugly. The sword does rock just a little in the scabbard. All this to say, I did not buy this sword for the scabbard; it is more like an added bonus or another way of storing the sword. It is not a piece of art like the actual sword.

At over 5 lbs, this sword is not for the faint of heart. However, I have other swords at 3 lbs that feel heavier than the Ranger simply because of the P.O.B. The description on the website does not exaggerate, as I found this sword’s P.O.B. to be right at 3 inches. Surprisingly, this makes a sword at over 5 lbs quite easy to maneuver with while still being capable of delivering remarkable blows. Swinging this sword around, I was impressed to find that it was fairly easy to control.

While I would specifically use this as a two handed sword, it can be used with only one hand. I was able to handle it with control and efficiency, but certainly not as well as with two hands. It certainly isn't light.

At first, I was a little worried about cutting. After previous reviews of Darksword’s sharpening service, I was feeling apprehensive. In addition, I was having difficulty slicing paper right out of the box. Needless to say, this apprehension would not keep me from slicing a bottle or two. I started out with a few milk jugs and found that the sword sliced right through like butter. I upgraded to some harder targets. I found that when it came to some harder plastics, the sword’s ability to thrust and pierce was exceptional. It ran through targets with ease. Next up were a couple of cardboard box bottles. As with the milk jugs, it cut them clean.

Those small thin walled devils known as water bottles were up next. The sword has sort of a love/hate relationship with cutting the bottles. This could be due to by technique (likely) but I am still sure (to keep from having too wounded a pride) the sword was not sharp enough to cut the thin plastic with ease right out of the box. It sort of have cut, half tore through the bottles. Last up was a watermelon. The heavy blade lopped through the melon with ease.

For a functional ranger sword, Darksword Armory did a wonderful representation of the classic style. Over the years, Darksword has had some negative reviews, but my experience with them was flawless. The communication was great, the shipping quick, and most importantly, the product is of a great quality.

The temper is really an impressive thing. The heavy but well-balanced blade is capable of incredible blows while not sacrificing on balance. Overall, I am pleased with the Ranger sword from Darksword Armory. The product I received is well worth the price. Darksword has advanced greatly over the years and I am excited to see what else they have in store for the future.

We have the latest version of DSA's Strider Sword here in the SBG Sword Store. There we offer this sword for $625 with FREE sharpening and FREE shipping in North America - saving you around $60 if you were to buy it anywhere else.

I hope this review of the DSA Striders Sword has been helpful. To return to Decorative and Functional Fantasy Swords from Battle Ready Strider's Sword, click here