These are other areas where MRL is leading the way in development of these ever growing genres.

"When we decided to get into this, we sought out the experts"

There is no doubt that MRL is on the cutting edge of what is hot, what is hip and what is now, and when I asked Dave how they stayed that way his simple reply was that they were avid fans of movies, TV and books and this helped keep them on top of the game. Additionally , having relationships with major studios has the benefits of the studios actually approaching MRL with projects and ideas. Sometimes they pass, if the theme is say on the Japanese side of things , and out of their area of expertise... but having these relationships again builds and strengthens all the areas of the business.

The area of LARP is one which huge growth and development is happening in , and MRL is helping to revolutionize the genre.


For instance, MRL is the first company to license rights for LARP weapons and costumes. To date they have licensed Lord of the Rings, Conan and the soon to be announced Monty Python and the Holy Grail 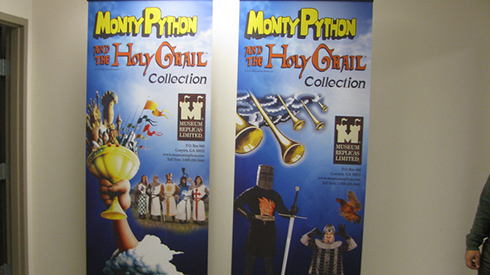 I believe that they have costuming now for Arthur and Sir Bedavere, and will soon be adding Zoot, Patsy the Squire, and Tim the Enchanter.

LARP costumes and weapons are made from a hypoallergenic latex material. Dave says , "When we decided to get into this, we sought out the experts," but from where I'm sitting it looks like the experts are across the table from me.

He tells me there are two different latex materials that are used, "hard" and "soft".

The hard latex is what is used for a lot of the movie costumes , as well as some helms and armor in LARP.

They are prototyped in steel, molded and reproduced.

Some exciting developments in MRLs worlds of LARP are coming up , with Renn Faire vendors soon to be carrying their wares.

When asked if they had considered creating a LARP game and designing the props for that Dave said, "Yes, both licensed and unlicensed, but if I tell you any more I'll have to kill you ."

The excitement is contagious, because there is a level of realism to the latex weapons which makes me think "these are the toys I wish had when I was a kid". But these aren't kids toys, they are state of the art props for reinactment , LARP and other such activities.

Likewise with the world of MRL costuming. Earlier in this story you've seen the pictures of the exquisite costumes MRL designs and prototypes in-house.

They awaken in me that childlike sense of pretend, but without any danger of looking like a child. These are not so much costumes , as clothes.

The challenge in turning a movie wardrobe into a cosplay item is mostly in materials Dave says. You've got to take that movie item and translate it into basically a wash and wear wardrobe item that these guys can run and be active in all day at the Faire or Con.

Exciting developments we can expect to see in the near future from the MRL costuming crew include a "Create Your Own" costume tool, just as we have seen with the Create Your Own Sword Line.

Steampunk is something I know next to nothing about except it's Orwellian roots, and its growing popularity. I did see a set during my visit with a bunch of working machines that MRL built in support of their Steampunk products, but that's all I can say about that. We should see more soon.

Save 10% off all orders at Museum Replicas with the Coupon Code: SBG2021