SBG Swords: The Quest to Make the Perfect Katana

The humble beginnings of our own range of Katana was pure serendipity - and sprang from my feeling that, despite the fact that there were many good Katana at the sub $300 price point that there was something missing with all of them..

At first, I just accepted it like every other sword buyer. There were, after all, limitations on what can be achieved at the entry level price point. But a few years later, I suddenly found myself with the opportunity to try my hand to do something about it..

When I started SBG in 2005 I honestly had no idea I would EVER be selling swords myself - never mind designing them or creating exclusive lines!!

True enough, I was looking for a way to finance the site and get it to pay for itself and the swords that I was busting up in the name of testing. Initially, I had hoped to achieve this through traditional affiliate sales and perhaps even some sponsorship..

But this never eventuated..

We kind of fell into selling swords almost by accident, and how we started by dropshipping a few Cheness swords is already covered elsewhere, but even as we slowly added a few selected products from other trusted manufacturers, there was never any thought of creating our own exclusive SBG swords..

However, this all changed in 2008 when the market for Japanese swords was at an all time high, and several ebay based sword sellers from China started offering customization options to their products.

At first, the swords received were quite good - but the problem was, the sellers knew that they were being watched on various forums, so they made extra effort and made them at a loss to get the word out.. Once the word was out, and their orders started pouring in - things seemed to go downhill fast - with many people getting scammed, messed about or receiving a product that was nothing like they had specified, and good communication in the lead up ended in silence once the deal was done...

Sadly, as is often the case - these sellers and the forges did not care about an individual order. Money talks, and the only way they could be held accountable was if the customer placed a VOLUME order with repeat business.

By coincidence, at around the same time a good friend of mine in Canada who had close contact with a small, boutique forge contacted me and asked me if I was interested in trying a few customized swords out for myself..

It was a lot of fun when I first designed my own personal swords.

And in due course, the blades came in - I tested them (hard) and was impressed. I had a few more made for myself and some friends, and soon after got to thinking - why not make a batch, a 'SBG group buy', to my site visitors?

This was, without knowing it at the time, Batch One of the SBG Custom Katana - and while the swords that arrived were on the most part great, there were a few discrepancies. But as we represented a large order to the forge with the potential for repeat business, they bent over backwards fixing it for us. And soon enough, there was a batch 2.. 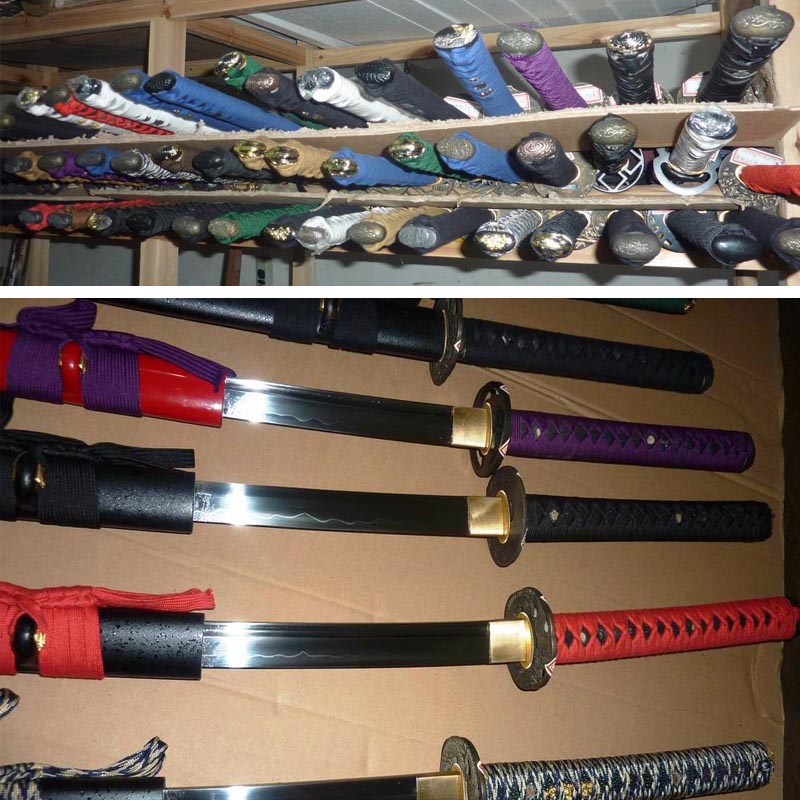 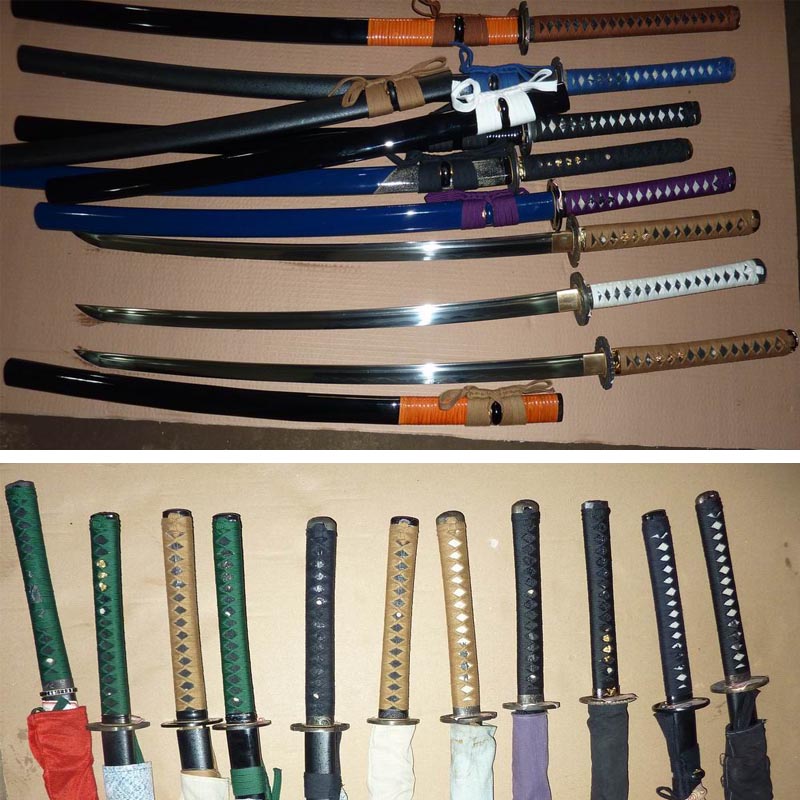 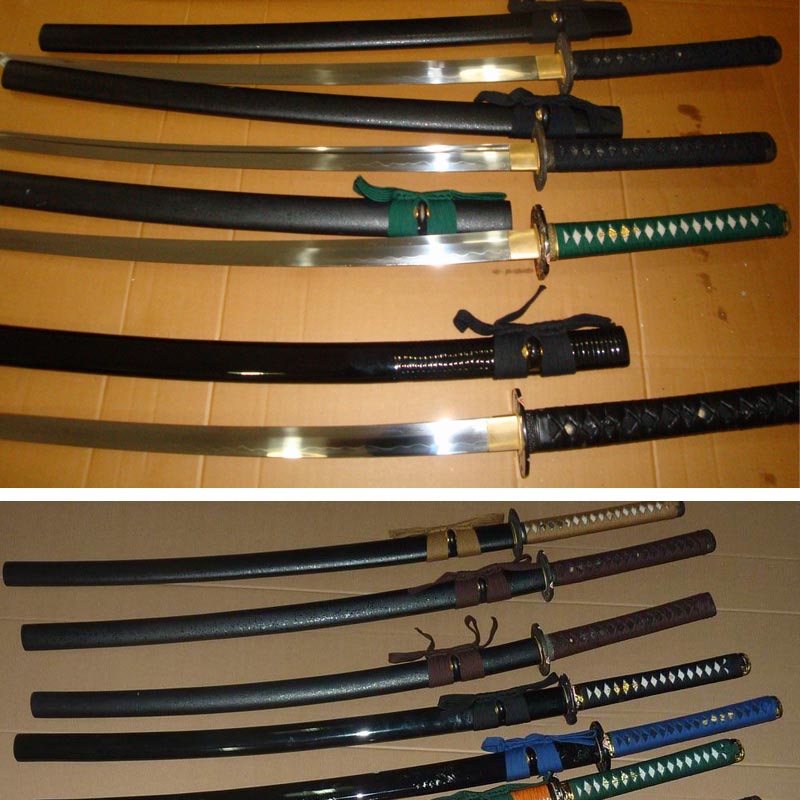 However this wasn't all that was going on.

At the same time as my Canadian friend contacted, by pure chance, I was contacted by one of our first SBG sword store customers (also a Kanuck!) who had told me he had also been working with a forge in China and a team of Canadian Japanese Sword Art Sensei (5th to 7th Dan) to try and produce an entry level Katana that addressed the typical issues encountered on low cost, hand forged swords and he asked me if I was willing to help get the project of the ground..!

Naturally, I said "why not" so with the expertise of the JSA sensei behind the basic design I added my own experiences with the common flaws encountered in entry level Katana and my personal stylistic taste (for what it is worth), and we started some prototyping these as well..

The ball was in court.

The Two Lines and the Turbulent Years

While there were two lines in development, they both took very different paths. I am condensing 5 years worth of experiences into a few lines here, not an easy task at the best of times, but in summary we had our share of successes and also some real challenges..

Of the two SBG swords projects I was involved with, the SBG custom Katana line grew the fastest - and from it evolved the occasional release of limited edition designs that I created myself, such as the Black Dragon Katana, the Yukiken, Oyabun and a redesign of the original prototypes. It was a lot of fun - and while not many of each design was released, they were exceedingly popular.

The second project, the Proswords line, took much longer to get the ball rolling but eventually evolved into two swords - the Proswords Torakami and the Kuramono Katana.

After a couple of years, both projects had matured and as we had agreed from the beginning - I handed the Proswords line over to the gentleman who sparked the idea in 2010, but things did not go so smoothly. Proswords encountered a series of production set backs, changed ownership yet again, and then in 2012 the original forge stopped making them..

At the same time, I was having some problems with the SBG custom Katana series. After years of relatively smooth running, some recent optional upgrade options we offered on the SBG Custom Katana turned out to be a spanner in the works, and the number of errors, which we had nailed down to 2-3% suddenly shot up - requiring an unprecedented number of remakes and component changes. Add to this significant shipping delays and both the lines I had created faced a very uncertain future..

By this time Proswords was well and truly on it's own. We had helped them get started and provided the initial designs, but even though I was no longer involved in the project and had not been for some 3 years, at least 2 or 3 times a week I was acting as a go between when their customer service failed to deliver the goods or just went silent and did not reply paying customers inquiries. In the end, it did get sorted when I stepped in, but because of this they were hard for me to continue to heartily recommend or endorse (plus now, the swords are now made by a different forge) so I have distanced myself from this project - after all, much of my time was tied up in the SBG custom Katana, which remained firmly my project from it's inception, and each batch required several hundred hours of correspondence with the forge, my friend in Canada (who I refer to as 'my agent') and of course, the customers who had placed an order (or potential customers who wanted more information).

With my focus 100% on the SBG custom Katana - by the time we reached Batch 21 I had an important decision to make. My prices had not gone up on these since 2008, but the cost of production and shipping had skyrocketed - and we had spent even more money on things like refining the polish of the kissaki, geometric kissaki and better techniques for wrapping the ito (pseudo and actual hishigami) to name a few. 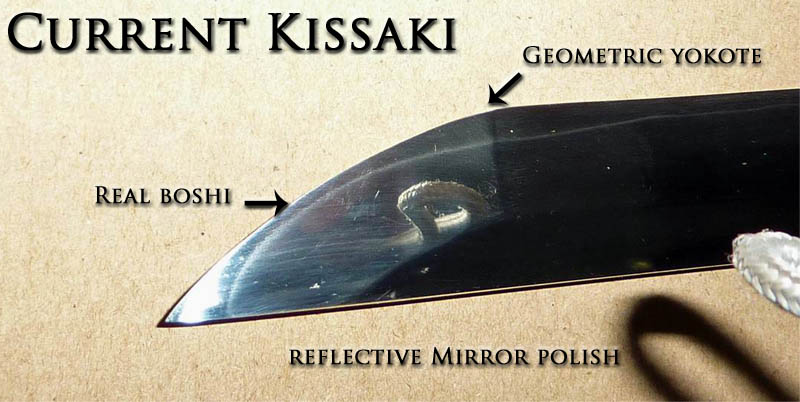 Starting with low margins anyway, I either had to raise prices or call it a day, tidy up the last orders, and be done with it..

It was then the emails of support started coming in from past customers of this line, telling me to raise the price and keep the project alive. After all, no-one else was doing it (from the stress each batch caused me and a lack of profit, I guess I could see why that might be!).

But raising the prices alone was not the answer. We needed to go back to basics, strip away the fat and apply the lessons learned from 21 batches and hundreds of swords we had commissioned... 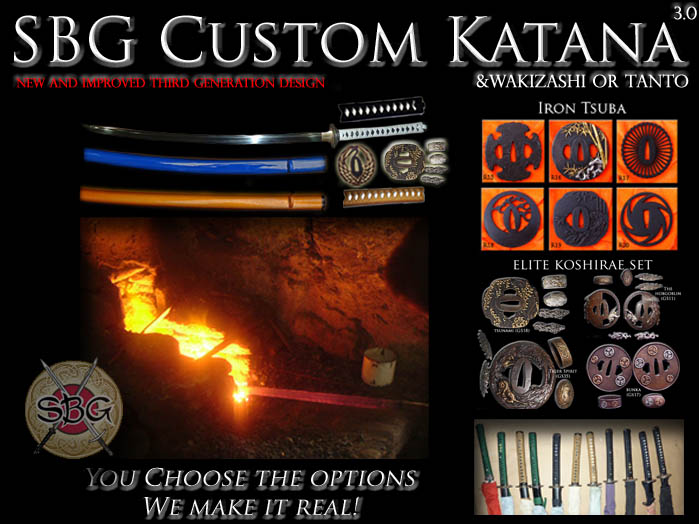 The first orders for 3.0 - a streamlined option menu of ONLY the best quality components- began in April 2013, and we waited with baited breath for the first ones to come in, hoping that this upgrade was going to deliver  all that I was expecting... 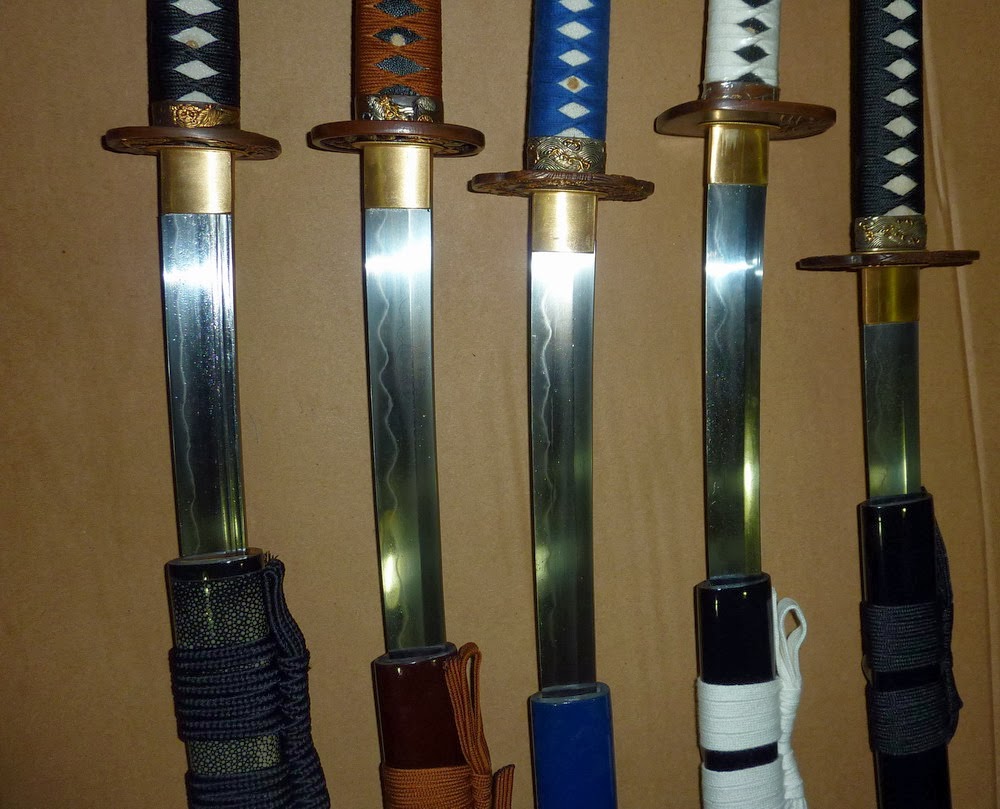 Thankfully, as you can see from the pics above, it did! 3.0 was here to stay, our relationship with the forge deepened - new exclusive designs began to appear - all under a new name, the "SBG Black Dragon Forge" 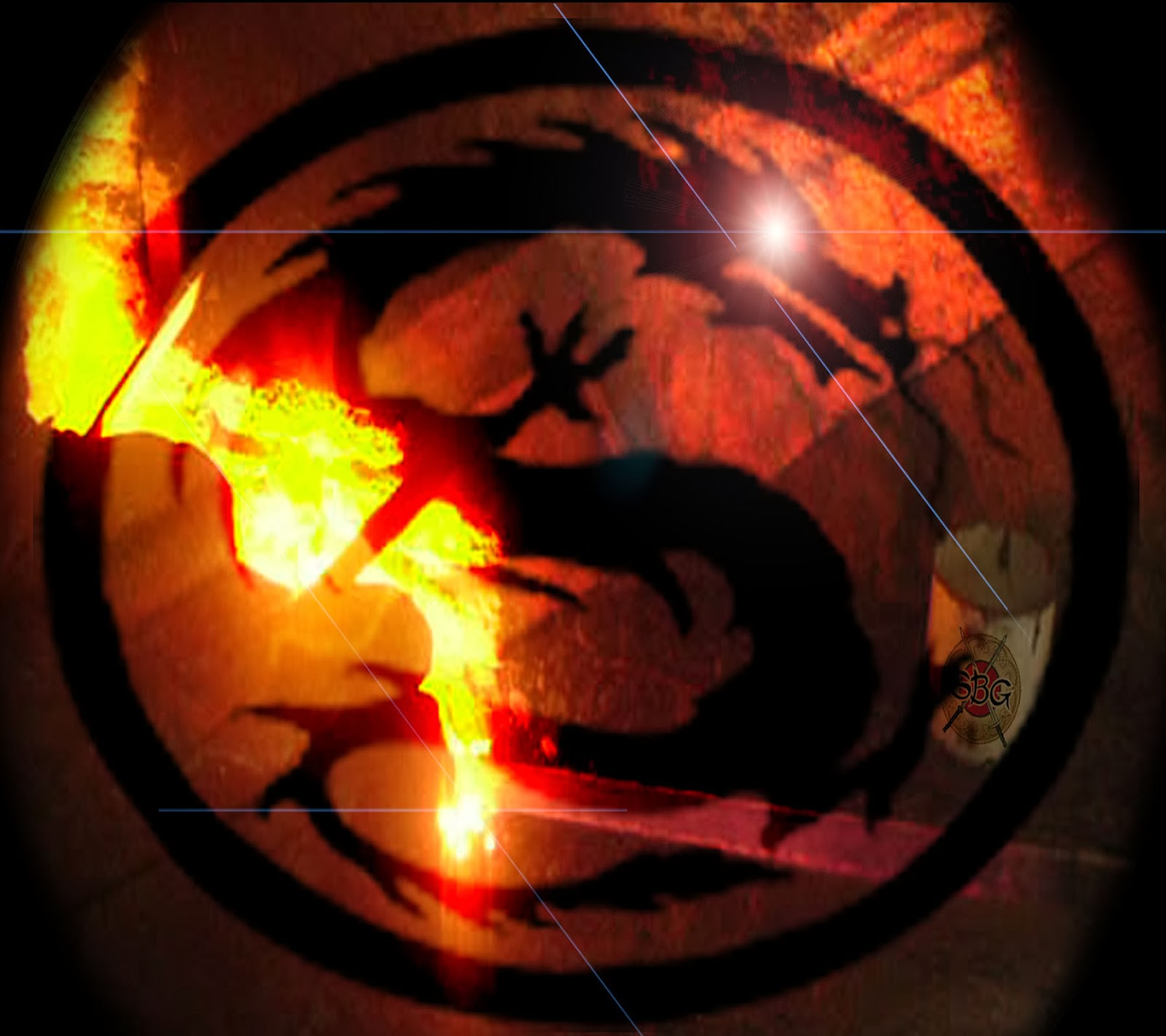 I hope this information on our SBG Swords has been helpful. To return to A Beginners Guide to Authentic Japanese Swords from, SBG Swords, click here