The original Forge Direct Katana review on SBG here was as unbiased as possible - after all, if the prototypes were not up to standard there was no way we would have continued with the project. It would have ended then and there..

Many of our customers buy a SECOND sword after they find out how nice these blades are for the price..

But I can see that how there is a potential for a conflict of interest - even though in the years since these swords were introduced our track record and customer satisfaction rate with these swords is around 99.5%..

Probably the only issue we have is that sometimes the Forge Direct Katana take a little longer to make than we would like. But that is the nature of any custom made product, delays are sometimes inevitable..

However, this review was of one of our worst examples to come out of the Forge Direct Katana project - so here's what our customer had to say - warts and all..

To put this review in perspective, I am a sword novice. My sister gave me a Katana out of the blue in September 2018. I'd expressed no previous interest in samurai swords, though I've always enjoyed samurai movies. Although it was an inexpensive Chinese sword, it resonated with me at a deep, inexplicable level.

I've since acquired several Katana in the $400-$500 dollar range. I obtained my first rank (7th kyu) in Muso Jikiden Eishin-Ryu Iaijutsu, in Dec 2018. This to point out that I have a high level of motivation and interest, but little knowledge.

Japanese terminology can be confusing, so click on any unfamiliar words for a full explanation of what it is and what it is for from our guide to Samurai Sword Terminology (links will open in a new window)

First impression out of the box: Striking appearance, wow factor.

I was able to easily polish most of it out.  A non-issue for me and I'm a perfectionist.

The choji hamon is the most striking feature of the blade.  Rather stunning actually. Too bad I had the brilliant idea to use paste wax on the blade instead of oil. It dulled the dramatic look somewhat.  Bummer, but the hamon is so dramatic, it still looks good!

A deliberately broken blade showing that a real hamon is more than skin deep..

SIDE NOTE: If you use a general purpose polish on a Forge Direct Katana, or indeed any Katana with a real hamon, it gets blurred and indistinct but it is still in there as a real hamon is made using a clay tempering process and to bring the detail back requires what is known as a hybrid polish - full instructions on how to do such a polish can be found on our site here.

Habaki: Good brass, not cheap and shiny looking.  I wanted one to support the water theme of the tsuba, so I paid extra for rain engraving. Paul went out of his way to find one for me. 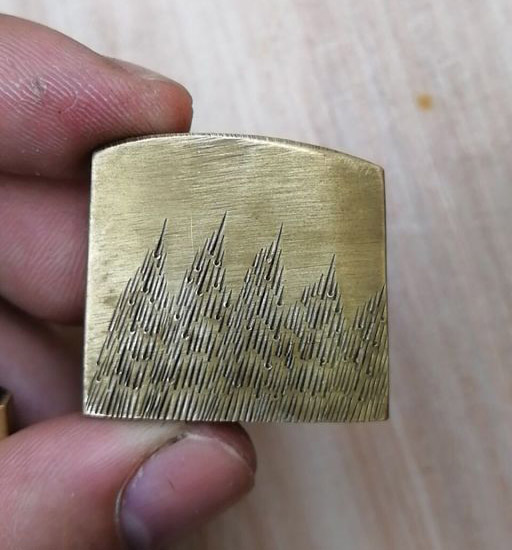 We try to be as flexible as possible accomodating customer requests - as long as it's kept reasonable, one or two extra tweaks that aren't on the menu are quite possible - just email us and ask.

Tsuba: Dark monotone copper patina.  Crane/tsunami theme.  Very, very nice.  High resolution.  Detailed.  I didn't like that the seam around the edge of the tsuba had not been entirely removed.  It didn't look bad at all, but it could have looked better.  I like to tinker, so I abraded and polished the seam away. 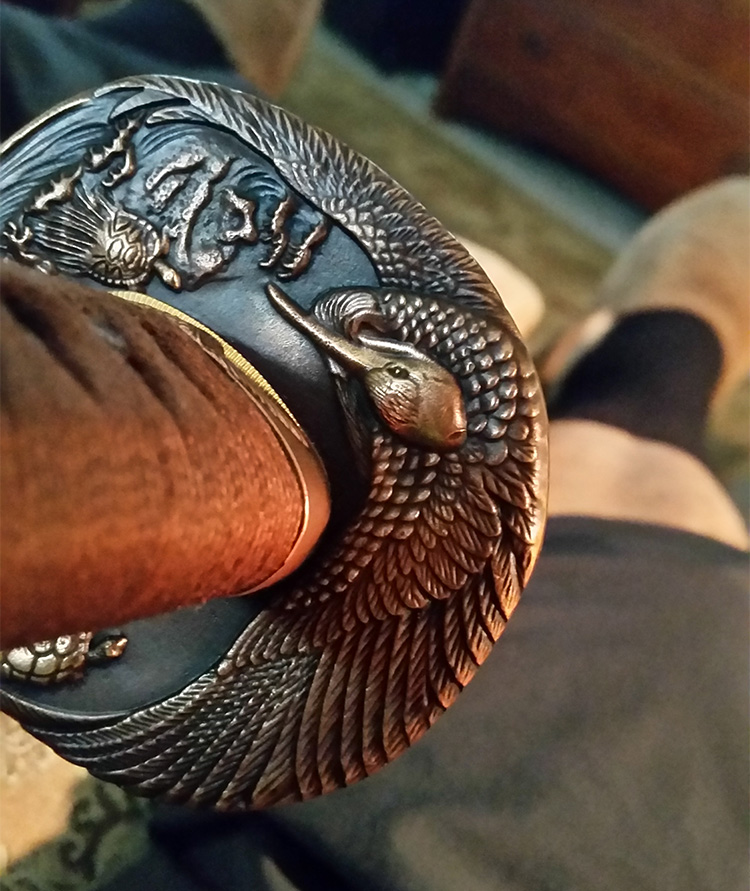 How the tsuba looks out of the box

That's when I discovered the tsuba was made of brass.  There's now a beautiful, golden brass edge around the tsuba, like a bright ring.  I then brought out the highlights of the waves and crane's wings with 0000 steel wool.  I used gold paint on the crane's head and turtles.  These touches changed the entire look of the tsuba, giving the sword an even more dramatic appearance.

I took the sword to the dojo the other day.  The guys were very impressed with it.  One remarked that the tsuba made it look like a museum piece.  That was a bit of hyperbole, but it is suggestive of some Nihonto I've seen online.  Back to the review. 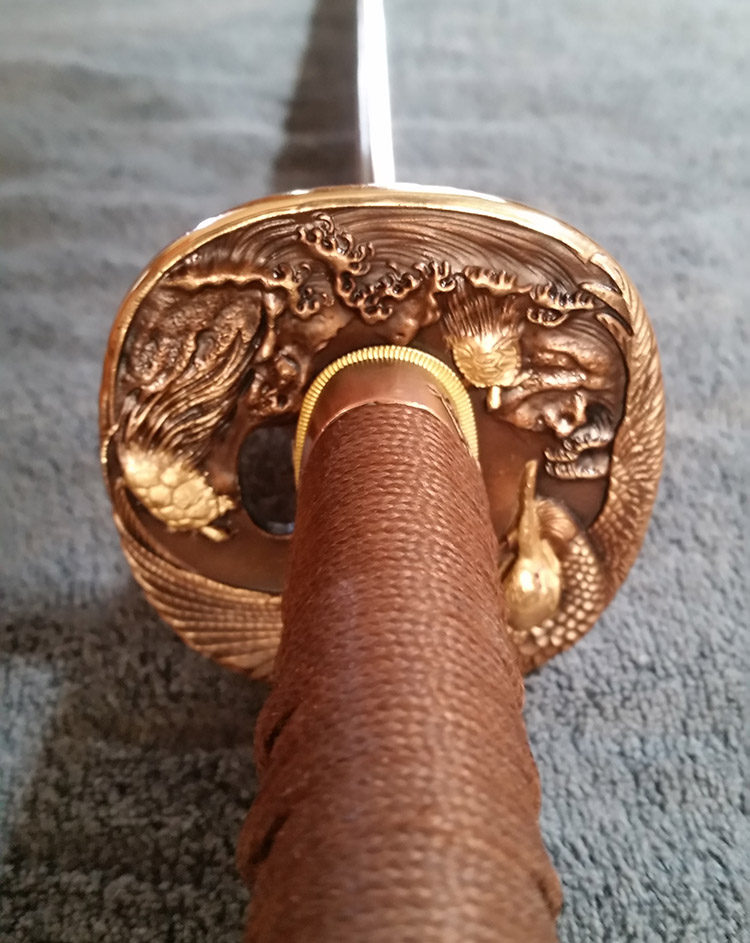 Fuchi/Kashira:  Copper patina.  Single crane on each.  Nice continuity of the crane theme.

Tsuka (handle):  Reddish copper ito, tight with minor give, not rock hard like that on my Japanese made iaito.  Diamonds are uniform in size and shape, almost perfect. On a par with my Japanese iaito.

The samegawa are one piece panels with small, very uniform nodules, identical on each side. Gives the tsuka a sharp precision look, earning a compliment from our senior instructor.  Nice because it offsets my preference for the larger nodules of older rays found on Nihonto and more expensive katana.  Menuki are elongated clumps of seaweed with copper patina.  Mekugi are much higher quality than I've seen.  Nicely shaped ends, one end more pointed.  They seem to have  been rubbed or burnished.

Saya:  Solid, substantial look and feel, a tad heavier than those on my less expensive swords.  The color I chose for the saya wasn't quite right for the overall color scheme.  I had it repainted with automotive  paint.

It's tougher than lacquer and the highly polished automotive clear coat doesn't hold prints and smudges much at all.  It stands out, yet it's conservative enough for the dojo.  I suggest prospective buyers choose colors carefully, but don't over think it like I did.  When in doubt be conservative.

Sageo:  It was so defective, it was almost cute.  There were picks and snags every few inches.  I counted over 30 of them.  Paul and I had an email laugh over it. Paul jumped on it right away and sent me a higher quality sageo to replace it. 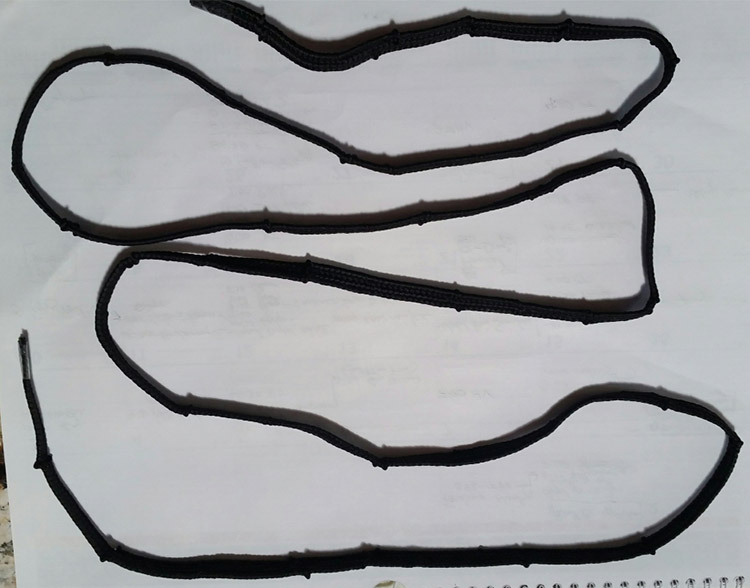 Over 30 snags in the sageo - read the update below to find out WHY it happened and why it won't happen again..

UPDATE: The cause of the snags was later found to be some burrs on the inside of the brass shitidome - a part of the sheathe that is used to cover and reinforce the hole in the protruding Kurigata where the sageo is tied to the actual sheathe itself. This has since been brought to the forges attention and will be included in the standard QC process to avoid it happening again..

Balance and handling:  The sword weights 2lb 8oz.  It's a few ounces heavier than I'm used to.  I believe it's because my others have smaller, lighter tsubas.  Though the tsuba adds a little weight, I believe it brings the balance point closer to the hand.  Because of this, my Elite T10 feels lighter than another, sword I have that weighs a few ounces less.  Validated by my Sempai (senior in the class) who was surprised the sword didn't feel as heavy as he expected.

I have not used the sword to cut.  I have yet to train in proper tameshigiri technique.  I have not removed the blade from the tsuka to examine the nakago.  No concerns in that department, though.  The blade is very tight within the tsuka. No creaks or wiggles.

While no cutting was performed with this sword yet, it has been extensively testing and is truly a very versatile cutter. Indeed, I have yet to find a sword that cuts both very light to quite substantial targets quite as easily as the Forge Direct Katana. Below is my video highlighting what it can do from my own review of the prototypes here..

Finally, there's Paul.  He demonstrates a genuine desire to help sword freaks and provide the highest quality he can for the price.  He spent a lot of time patiently answering my pre-sale questions. I was hung up on a minor detail and was hesitant to keep bugging him with it. He didn't bat an email eye.

He worked with me until I was comfortable and made the buy. Also, of all the online sword dealers I've come across, Paul provides way more educational and tutorial information on the SBG site.

Now that I've done business with Paul, I know it's more than just marketing style. I think he sincerely likes to make sword buyers happy and goes to great lengths to do so. It comes across in his web site and way of doing business.  I also like how he refers to his employees as a team.

One more thing. The other day I was shopping for three wakizashi as gifts for family. You'll never guess where I bought them. You are so smart!  I mean, I did look around and compare, but it only confirmed what I was sure to be the verdict: Sword Buyers Guide Official Sword Store..

In my limited experience, SBG frequently comes out on top for quality and price.

It's virtually unnoticeable, allowing me to relax about the issue. Rem Oil seems to be second best.

Opening the box for the first time..

Unsheathed, the Ko Katana variant is has the same length handle as a full length Forge Direct Katana, but the blade of a Wakizashi 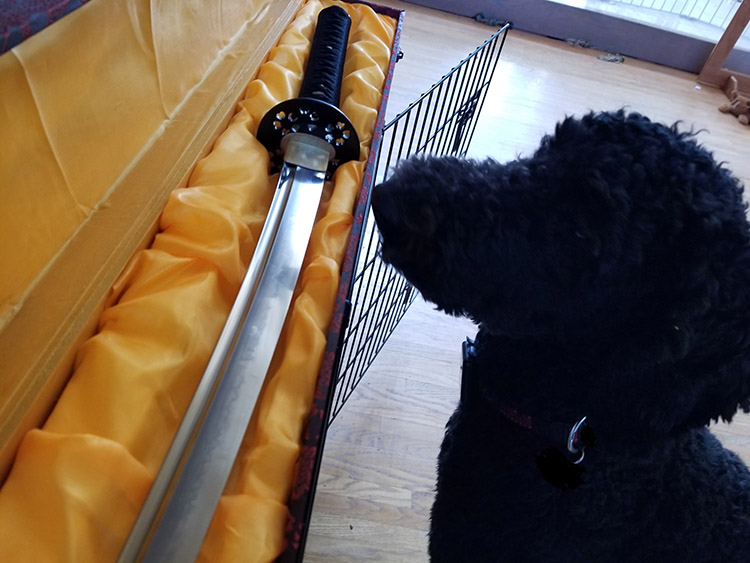 It passes the 'sniff test' with flying colors 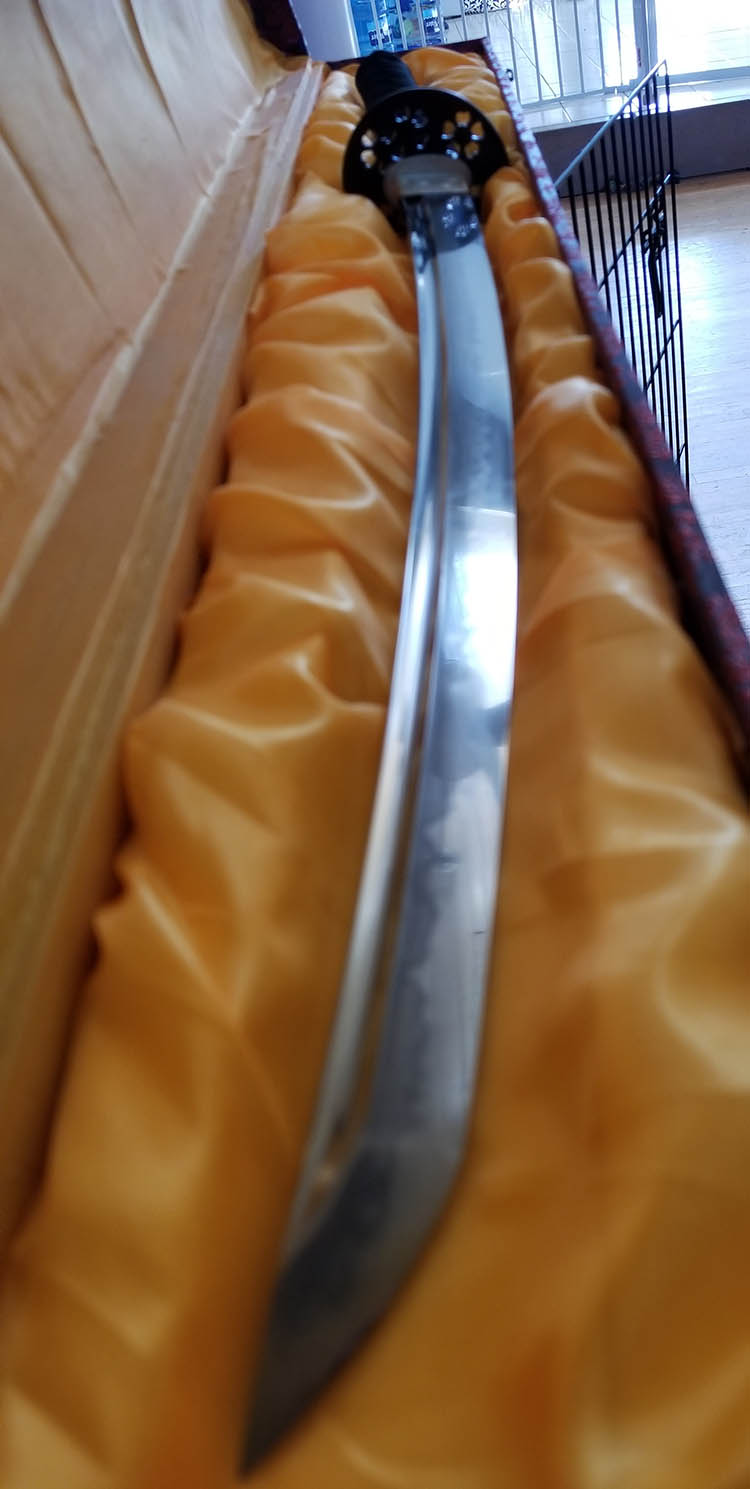 A little blurry, but you get the idea 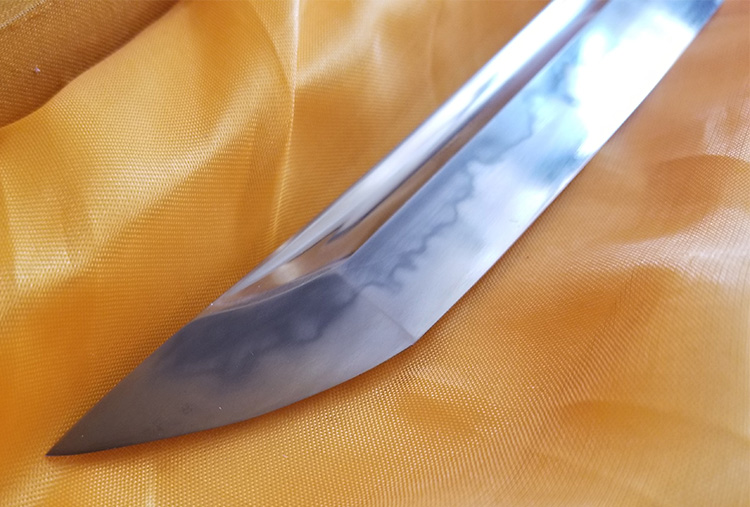 And a close up of the kissaki tip with boshi, geometric yokote and traditional hand carved bo-hi termination.. Basically everything anyone could ask for in a Shinken

The Forge Direct Katana, Wakizashi/Ko Katana and even a giant O-Katana are all available exclusively here at the SBG Sword Store. Prices are currently much lower than they should be, and may go back up again if a monthly minimum order quantity is not supplied to the forge. So if you want one, don't put it off too long - the current prices are an absolute steal..