Windlass Steelcrafts "Towton"
Hand and a half Sword

While this sword has been discontinued, the review has been preserved here for informational purposes.

Back in 2005, many considered the now discontinued Towton hand-and-a-half sword to be one of the finest swords of its type available in our sub-US$300 budget.

There's no doubt that the Towton was certainly one of the most popular entry level swords; thanks in part to numerous favorable reviews featured on sites such as My Armory.com and Sword Forum International, where this hand-and-a-half sword was compared most favourably with swords costing twice as much as it's modest US$225 price tag.

But this sword had not only just impressed the sword buying community...

Indeed, even Chris Howard - Canadian based distributor of Windlass Swords from Reliks.com - mentioned in his interview with Sword Buyers Guide in January 2006 that of all the swords he stocks the Towton was his personal favourite and he often showed it to people when they wanted to see what a 'real' sword looked like.

So with all this excitement, it was only natural that I had to get myself one to see what all the fuss was about first hand...!

Unfortunately, I almost left it a bit too late. The Towton has now been discontinued by Windlass and it is becoming increasingly rare to find them 'new'. But even though they are hard to find, this review still has its merits and much of the information here applies to around 80% of Windlasses hand-and-a-half sword replicas...

When I first received the Towton I was immediately struck by just how elegant this hand-and-a-half sword looked. 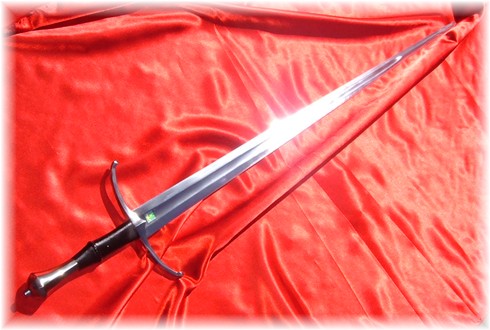 The blade itself is long (35") with a fuller running down most of its length before terminating to a very fine point. 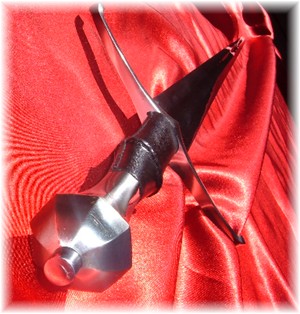 The pommel is a perfectly finished, evenly spaced and clearly defined octagonal lobe that really is a piece of art. A capstan nut secures the peened and threaded tang, securely binding the swords assembly together.

And the synthetic leather handle wrap is nicely stitched on one side with a cord riser separating one hand from the other, though there is a little too much room for the off hand and not enough for the dominant right hand at the top.

The Quillions are long and delicately waisted, terminating in two slightly oval shaped ends that give this hand-and-a-half sword an almost "elvish" feel.

Truth be told, this is not at all as silly as it sounds considering that this sword is only inspired by the battle of Towton (circa 1461) and not a replica of any historical original...

"Even the scabbard of this sword is really quite exotic looking..."

The pointed shoulder of the hand guard fitting snugly to the lip of the scabbard. And there is a delicate 'ace of spades' style flourish on one side of the chape, which is finished off at the bottom with a small ball like protuberance.

My only real problem with this hand-and-a-half sword was the assembly of the blade into the shoulder of the hilt, which quickly became apparent to me on my first few practice swings soon after receiving it...

Any time I rapidly changed the direction of a strike there was a disconcerting "tink-tink" rattling sound within the hilt that made me hold back. 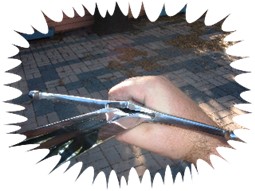 On closer examination, I discovered a gap large enough between the shoulder and the tang to slip a small coin into, which was causing the blade to clang against it every time it was stressed - a serious design flaw if ever there was one.

A little research soon revealed to me that this problem was not at all uncommon Windlass Steelcrafts swords, but is easily enough fixed by shimming - such as by inserting and super gluing a coin in the gap.

In my case though - since I was looking for a permanent solution that would not ruin this beautiful swords overall appearance, I shimmed it with an application of some fast setting polymer epoxy resin and the problem was fixed. As a result, the "tink-tink" sound is history, the shimming is barely visible and the end result is - as you will see shortly - a hand-and-a-half sword that handles remarkably well, though still with one more significant flaw...

Though it weighs a respectable 2lbs and 11oz, with a point of balance around 4" from the cross guard, this sword handles like a dream and is totally awesome for general hand-and-a-half sword training...

In the official 'blurb' for this sword put out by Windlass Steelcrafts, the sword is described as "a lightning fast cutting weapon" going on to say:

In the hands of an able swordsman this sleek sword would wreak havoc on the lightly armoured infantry of its day. On foot it could be used with two hands, delivering terrible cuts and thrusts. From the advantageous horseback position its perfect balance and weight still allowed for one-hand blows of equal devastation to anyone within its considerable reach.

Overall, I think this statement is actually pretty much on the money.

This hand-and-a-half sword is "lightning fast". And it's weight and balance certainly facilitate its use either one or two handed. In fact I enjoy switching between both when I train with it, and the noise that it makes as it rends the air one handed is very impressive and enjoyable.

The only problem is, the blurb's description of 'terrible thrusts' has two meanings...

And unfortunately, despite the fact that it feels like a good cutter, I found it a rather 'terrible' thrusting sword - with the blade simply not still enough to deliver a decent penetrative thrust (a feature also noted in the My Armoury Review)...

In terms of the cut however this sword performs quite well - able to effortlessly slice and dice cardboard boxes even in it's unsharpened state.

Put an edge on it however, and I think that its sleek profile combined with its speed and the strength of the thin blade would make it truly quite fearsome as a cutter - something I am planning to do in the coming months, so keep checking back here - I have a feeling that the end results will be quite impressive!

Overall I think that for US$225 this hand-and-a-half sword has its good points and bad.

Aesthetically, it is one of the best looking, most beautiful swords I have seen in this price range. Performance wise, it is highly recommended for hand-and-a-half sword training as it superbly balanced, extremely fast and handles very smoothly.

My only real issues with this sword is its thrusting ability, which for such a dramatically pointed sword should be much more effective than what it is.

But my main concern is with the loose, rattling handle which even for a sword in this price range shouldn't have to be shimmed to feel secure using it...

With a slightly stiffer blade and tighter assembly at the handle, this sword could easily be mistaken for a hand-and-a-half sword that sells for US$500+.

As it is, while this flaws are acceptable for a sword at the price point it retails for - if Windlass were to seriously address these issues I fear that they might put a lot of higher end sword production companies out of business!

Just before it was discontinued though, it was steeply discounted in the Last chance section of Windlass Steelcrafts retail store, Museum Replicas Limited (MRL).

While there are always some excellent deals to be had on discontinued swords there, you can also save a further 10% off the already reduced price (effectively meaning you are buying it at a WHOLESALE price!) by using the SBG 10% Discount Coupon Code SBG2021 (or tell them over the phone on 1-800-883-8838)!

I hope this information on the Towton hand-and-a-half sword has been helpful. To return to Affordable Replicas of Medieval Swords from, Windlass Steelcrafts "Towton" Hand-and-a-half Sword Reviewed, click here.