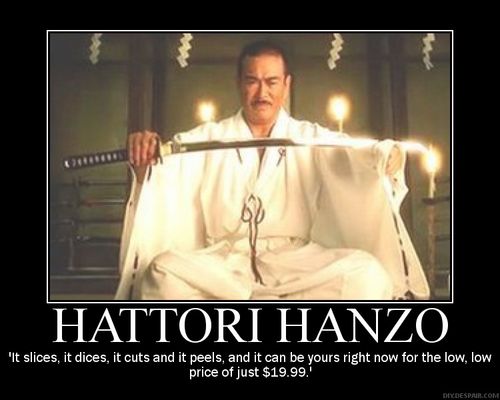 There have been a lot of Kill Bill Swords for sale on the internet since Quentin Tarantino's hit movie took the world by storm back in 2003. But I have to wonder that if Hattori Hanzo was real, what he would think of all the so-called Kill Bill swords that were sold online over the years..

Actually Hattori Hanzo was real - but not the character from the movie. The name was appropriated from a legendary Ninja Warrior from 16th century Japan whose exploits are the stuff of legends and has appeared in many anime and manga over the years. Hattori Hanzo on Wikipedia

The overwhelming majority of these swords were and STILL ARE all very cheaply made Chinese stainless steel replicas - and at the height of the Kill Bill movies tens if not hundreds of thousands of these things were sold, almost without exception with handles made from plastic with a nylon wrap, brittle stainless steel blades and rat tail tangs..

Not only are these so called Kill Bill swords badly made, most are terribly inaccurate replicas to boot! For example, in the movie  Bills sword has a silver demon head mon insignia on the scabbard. But the Kill Bill swords for sale online have a golden one. And that's just the obvious stuff..

These replica wallhanger swords typically sold for around US$39.99 to $75 from online sword sellers, however on eBay they were and still are easily obtainable for less than half of that price (in fact, during the height of the Kill Bill craze, I saw wholesale cases of 10 go for US$99 - that's $9.90 a piece, which gives you a good idea of how much they actually cost to produce!).

Now things have calmed down somewhat, the wallhangers are less common - click here to see what kind of variation there are in replica Kill Bill Swords on eBay today..

"So luckily for the true fan of Kill Bill Swords, they aren't ALL junky stainless steel wallhangers anymore..."

One of the first to break the mold and make a functional replica was Masahiro who produced an extremely sharp, half decent FULLY FUNCTIONAL Kill Bill Katana which is available HERE at Kult of Athena at the lowest price on the 'net of just US$134.95 (most other stockists sell it for around $250 if they even stock it al all!). 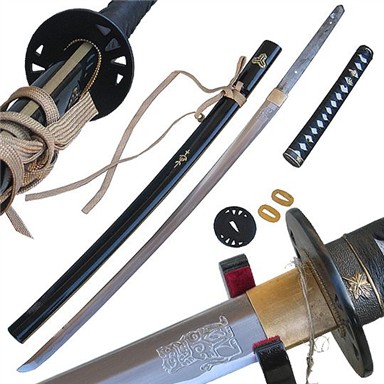 It's not perfect, but it is the closest thing out there still doing the rounds.

The blade is actually pretty good, 1045 carbon steel (the minimum acceptable for a cutting sword) and it is not badly balanced. Sadly the cheap 'pleather' (plastic leather) of the ito wrap and the handle components generally leave a lot to be desired - but it at least makes a decent base for further customization..

Unlike the other stainless steel replicas, the blade is strong enough for light cutting and practice and if Hattori Hanzo was real, I dont think he'd be very pleased with the stainless steel cheapies - but he might just give a cursory nod to these ones (well, if he was drunk I suppose).. Though there is one more that is probably the best and most reliable currently on the market HERE at Swords of Northshire

Apparently good enough to bring one hardcore female fan to tears when it was gifted to her, it is made from 1095 carbon steel and all indications are, of all the off the shelf Kill Bill Swords available, this is perhaps the best.. 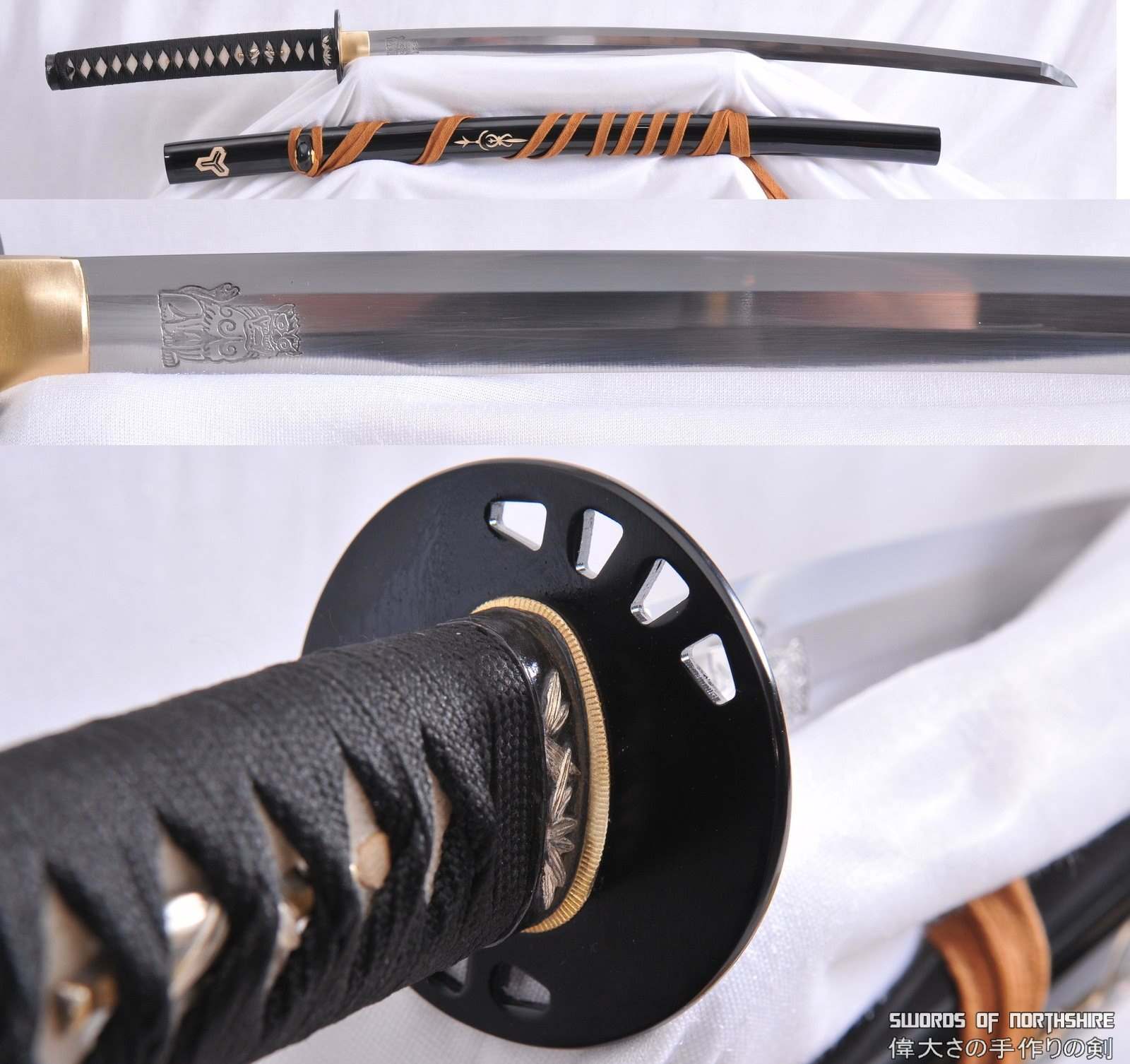 Perhaps the best 'off the shelf' replica by Swords of Northshire

Hand forged and made to order with iron fittings, at $339 it isn't the cheapest, but it is functional and pays close attention to the details..

Customization Tips to Make it Perfect..

Back in 2010 one our member, Jason Blakey, hunted through all the various Kill Bill replicas available at that time and picked out the Masahiro as the closest replica to the movie - and made it the base for a rather stunning rework.

These are the steps he took to do it:

And THIS was the end result of his DIY customization efforts..

Soon afterwards, none other than Adam Savage from Mythbusters searched the internet for his own Kill Bill replica, saw Jason's work on the SBG forum, and contacted him to commission the most accurate replica possible..!

10 months later, the replica was finished - Adam was delighted - and Kill Bill fans are in for a treat as the whole process from start to finish was painstakingly documented in our article - The Hanzo Hattori Sword Build.. 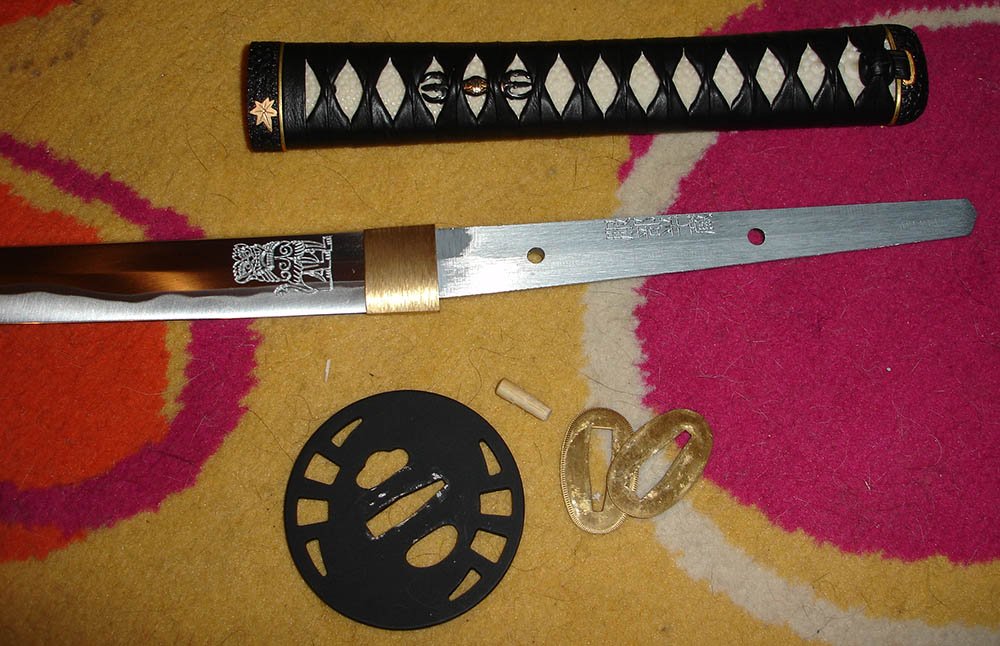 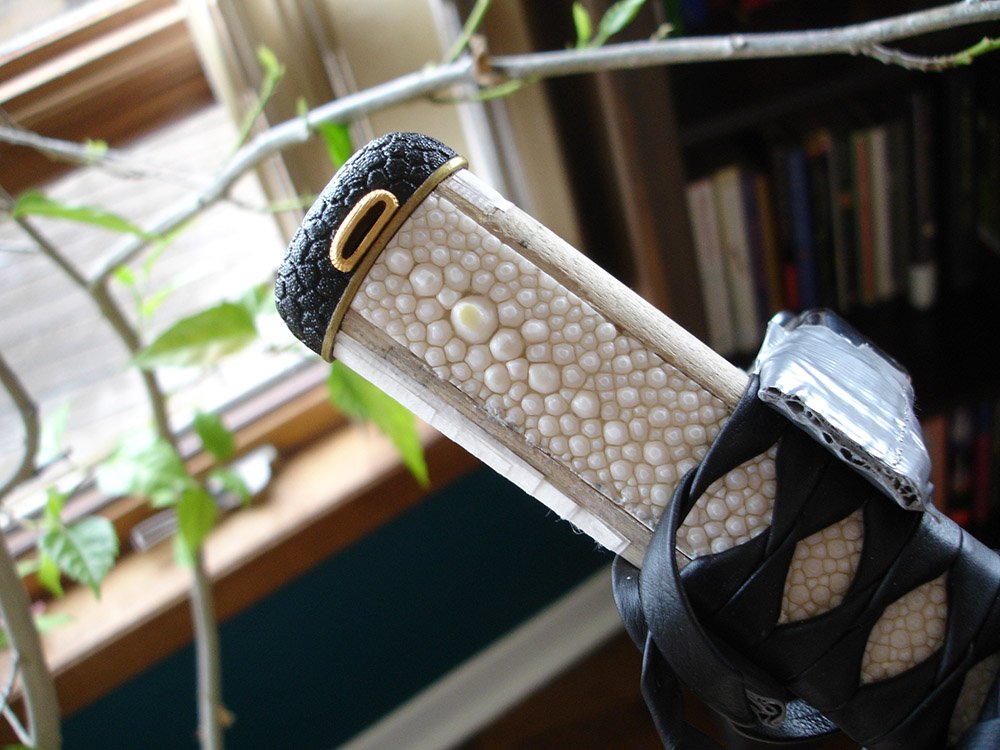 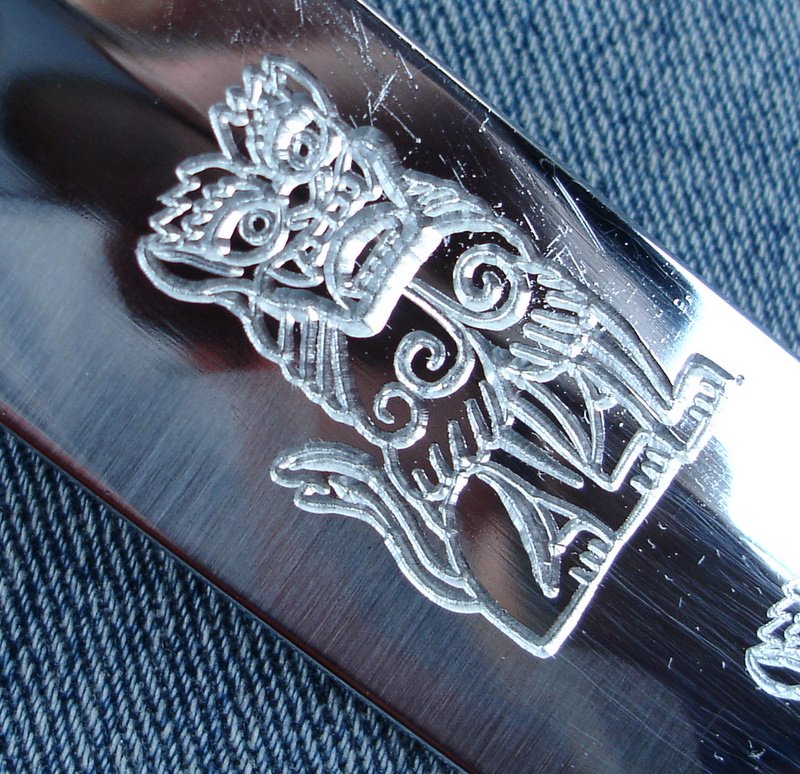 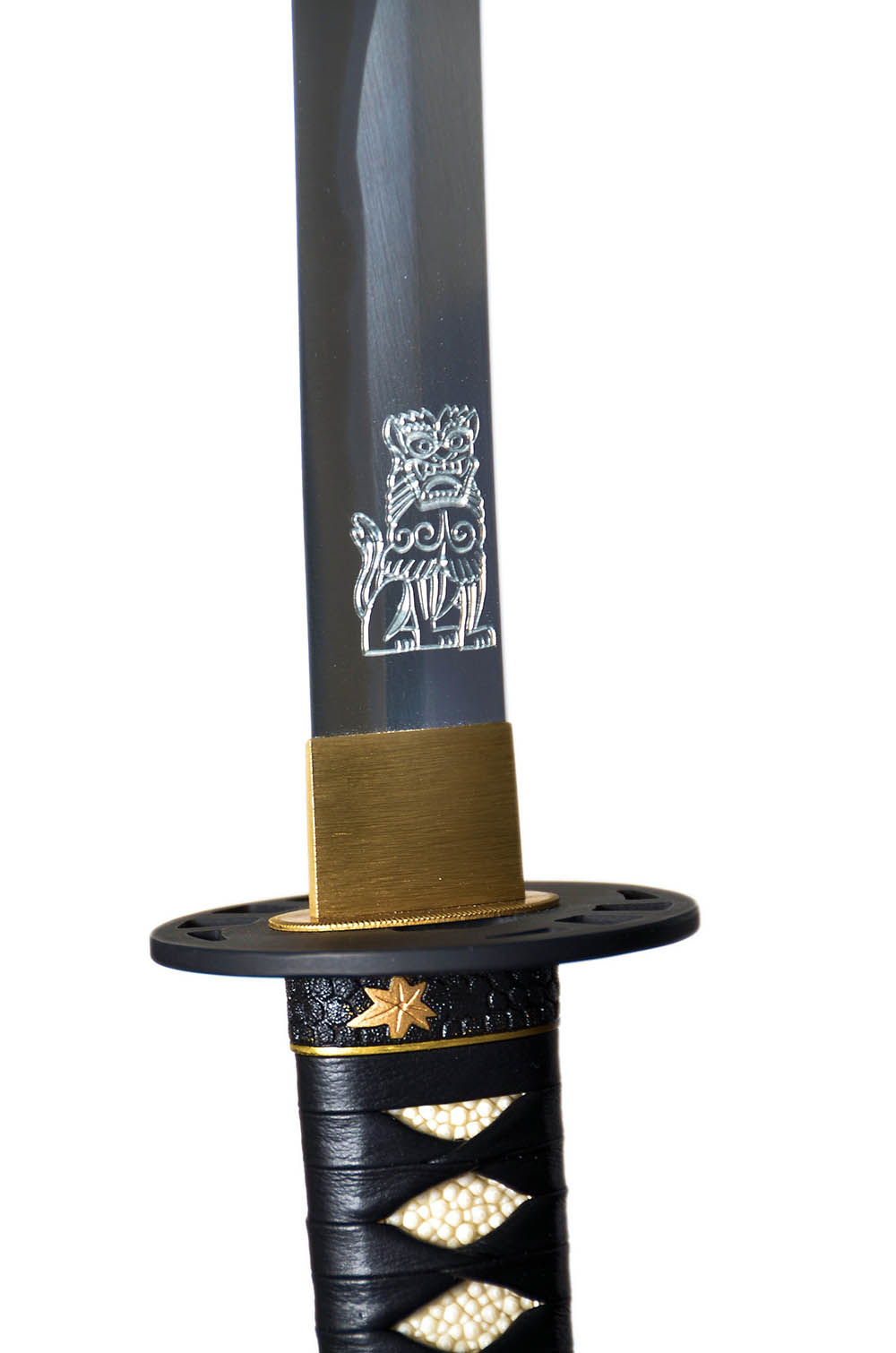 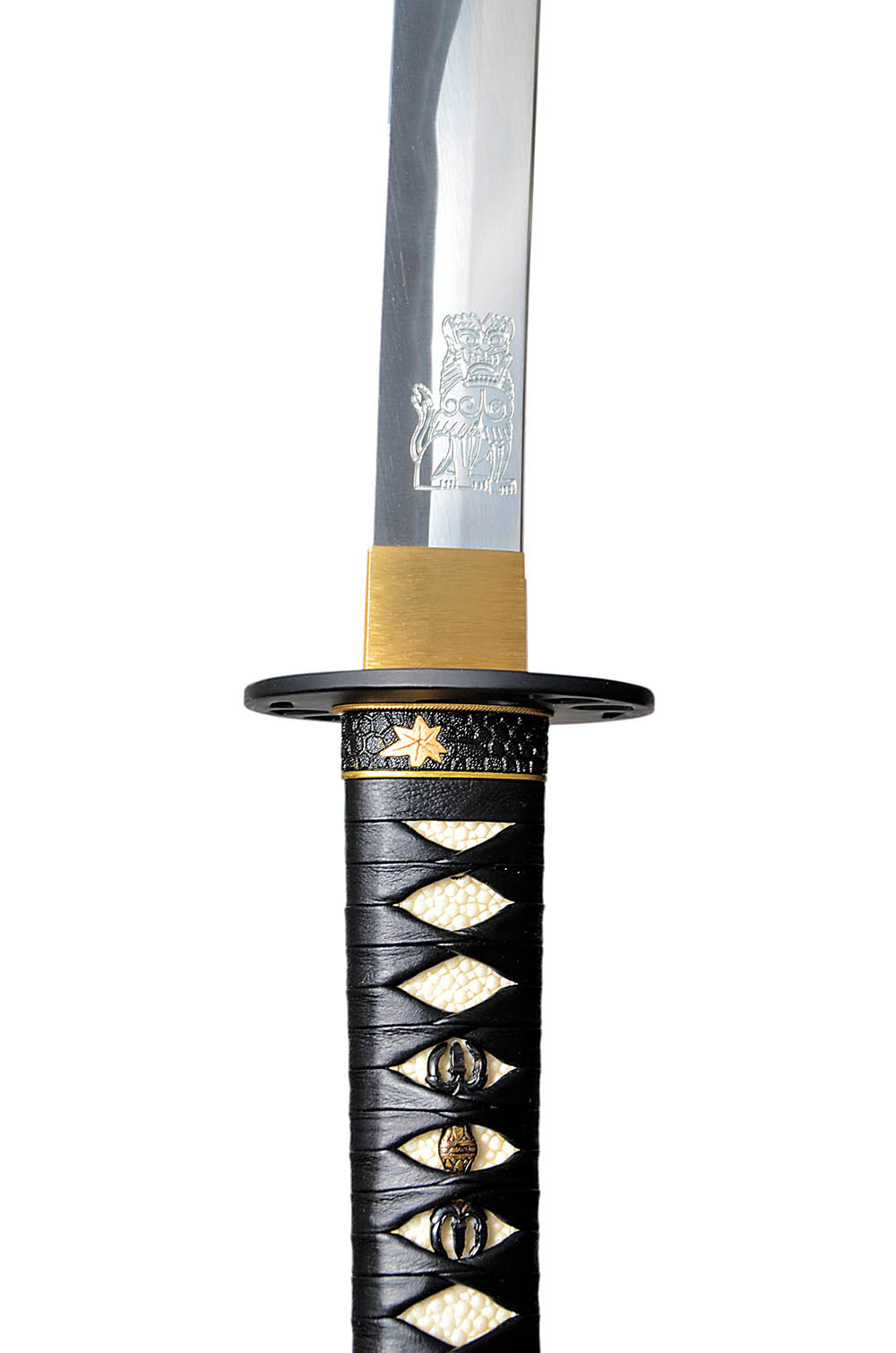 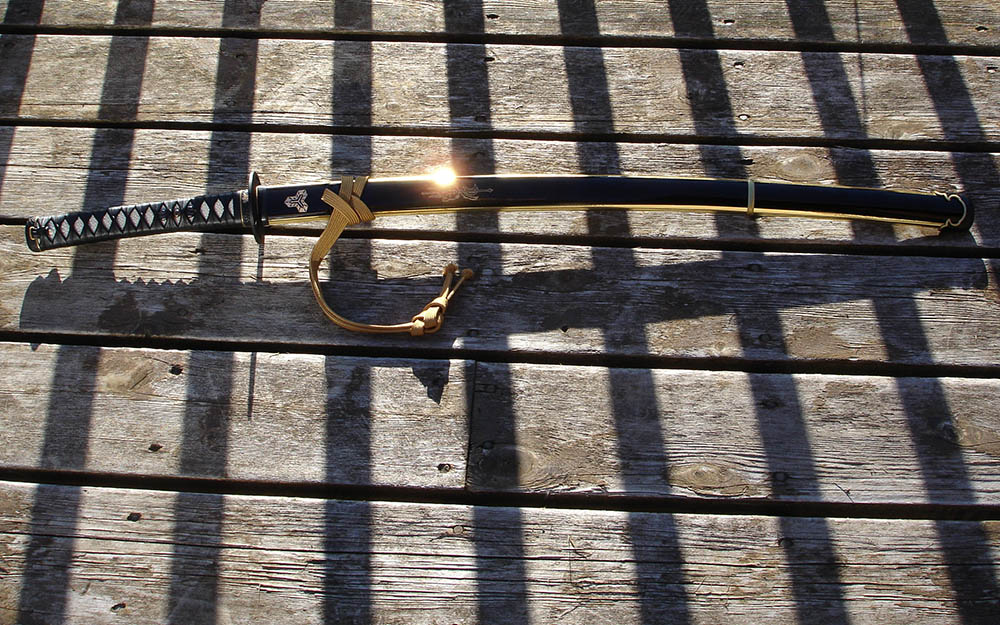 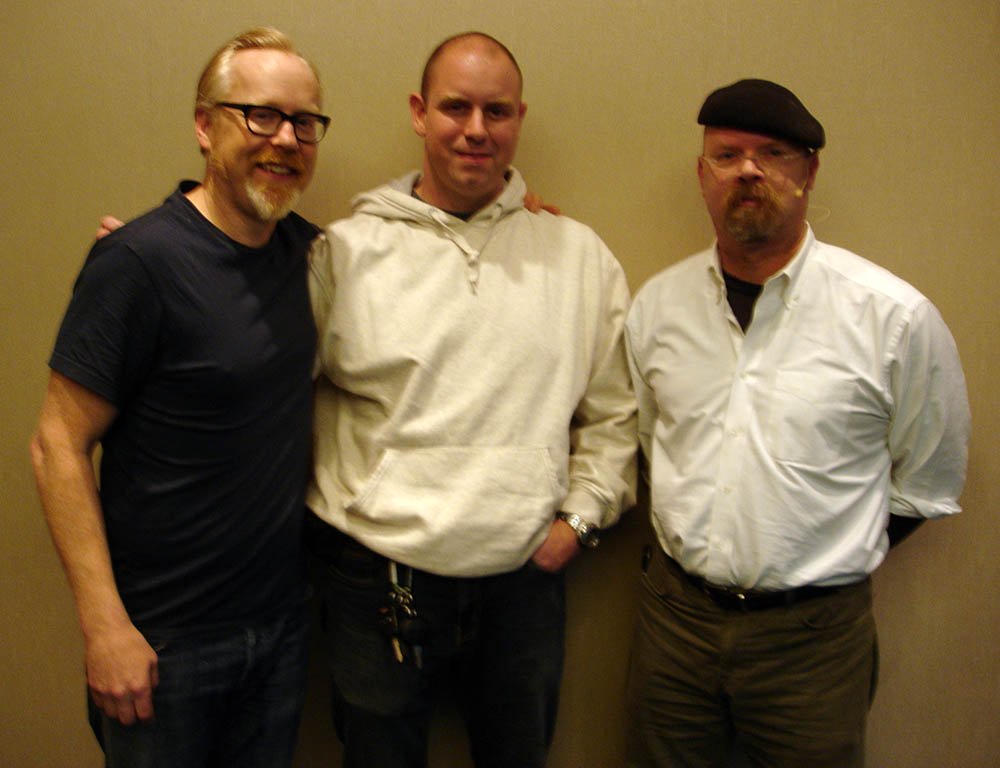 It is not for sale, and the maker of this build, SBG member Jason Blakey doesn't have a special website or anywhere that you can order them, but instead by documenting the customization process, you can get some ideas on how you might do something similar yourself (and at the end of the article, we present a full list of free detailed SBG tutorials on how to do many of the customization techniques - or similar methods to get close).

CHECK IT OUT HERE

Can't know for sure, but I have a feeling this replica might bring a smile to Hattori Hanzo's Face..

Just a small sampling of the collectibles for die hard fans of Kill Bill.. While the Kill Bill Swords used in the movie we sold many years ago, there still remain some genuine, certified collectibles at the internet's biggest and most respcted collectible store:

I hope this information on Kill Bill Swords has been helpful. To return to the Movie Replica Swords Guide from Kill Bill Swords: What Would Hattori Hanzo Think, click here.