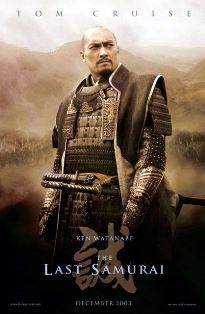 While it's been years since the movie came out, themed last Samurai swords are still doing the rounds - maybe because so many were made they still have mountains of leftovers...

Unlike the movie, which I really enjoyed (especially the standout performance of Ken Watanabe and the Japanese cast) there really is nothing special about the vast majority of these wall hanger display swords.

Much like Kill Bill Sword replicas, on the whole replicas of the Last Samurai sword are cheaply made stainless steel jobs with a spot welded rat-tail tang and all plastic fittings. While the dark black engraving on the blade looks impressive enough, it is the only thing that sets it apart from all the other cheaply made Japanese style display swords.

Online, these swords are available from most sword sellers for a maximum of US$99 to as low as US$40 HERE at Amazon.com which I guess is a reasonable price to pay for a for a display sword like this (bearing in mind that the places that sell them for $99 are selling the exact same sword!).

Now I won't pretend to be an expert on Kanji, but I have studied it for years and lived in Japan for a few years too, and character by character it means.

有 (Aru, archiac) To Have

So I guess the last translation is closest "Since Ancient Times to the present, God is with the Patriot (or public spirited person)!" - definitely not "I belong to the Warrior who in who the old ways have joined the new!"

Anyway, while most of the Last Samurai swords still doing the rounds are rubbish, for just a few dollars over the standard plastic crap there is actually a halfway decent 1045 carbon steel (the minimum acceptable steel for a functional sword) replica! 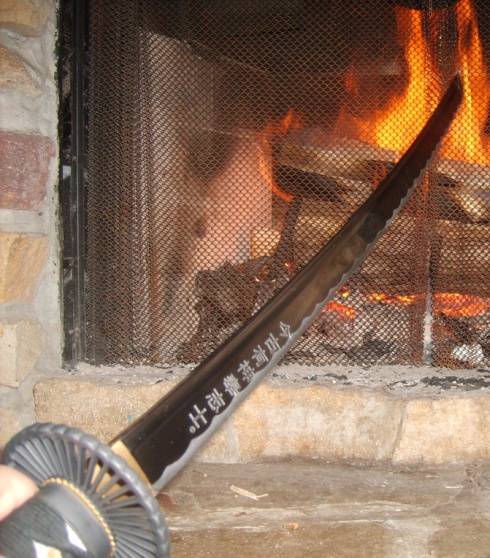 Made by Musashi Swords (also known as Musha Swords), the same people who created the famous Rosewood Katana in Shirasaya reviewed on SBG, despite a few minor imperfections (which are largely to be expected for a fully mounted $59 sword!) this sword is a much better choice for display and light cutting duties... (after all, when asked the question "so is it real?", most people lose interest when you say "Umm, no - just a display piece").

DEFINITELY well worth the additional $30 upgrade from the stainless steel ones, the price on this functional last samurai sword varies from $69.99 HERE at Trueswords.com to over $100 elsewhere.

I hope this information on the last samurai sword has been helpful. To return to Movie Replica Swords from The Last Samurai Sword, click here.