The Tinker Viking Sword, designed by legendary sword maker Michael 'Tinker' Pearce and manufactured by the Hanwei Forge in Dailan, China is part of a series of swords in this unique collaboration - such as the Longsword and the Bastard Sword reviewed elsewhere on SBG (click the links to see the reviews).

But just because the other swords in the series are good (the Longsword is a 5 star rated sword, the Bastard, a 4 star) doesn't necessarily mean that every sword in the series is going to be a winner..

Only one way to know, and that is to take the closest look possible..

I love the Viking age. I find it a fascinating culture with beautiful art and incredible craftsmanship. I like simple and functional, which isn't necessarily easy to find - I'd owned a Tinker GSOW (Great Sword of War) before, which was a very well-designed and executed sword, so I had no hesitation in going back to the Hanwei Tinker line.

I believe I recall Tinker saying that this sword was inspired by no single artifact, though it bears a striking resemblance to one pictured on Swords of the Viking Age pages 46, 49. It's a Petersen type E, and there are plenty of pictures of originals around. While it bears a very good aesthetic resemblance, it does have a few problems - namely, the furniture is stainless steel and the pommel is one piece rather than two.

The pommel is not unheard of historically, and understandable for the price point. I'm not sure why they went with stainless furniture - I prefer having the option of chemically darkening or aging components, but I'm sure some people will appreciate the maintenance-free idea.

As always, Kult of Athena packing was sufficient: 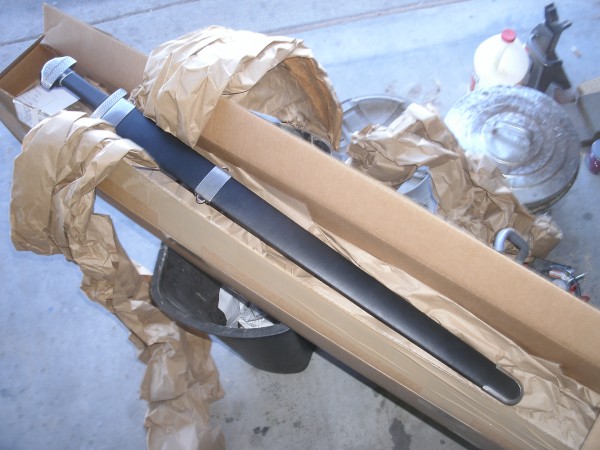 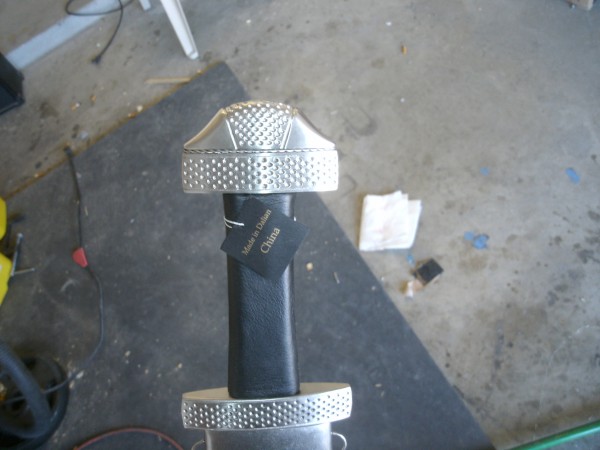 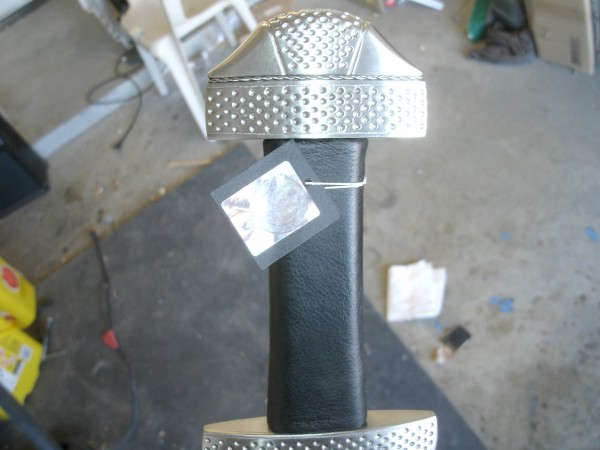 Came with a tag on the hilt with the made in china statement and the hologram. 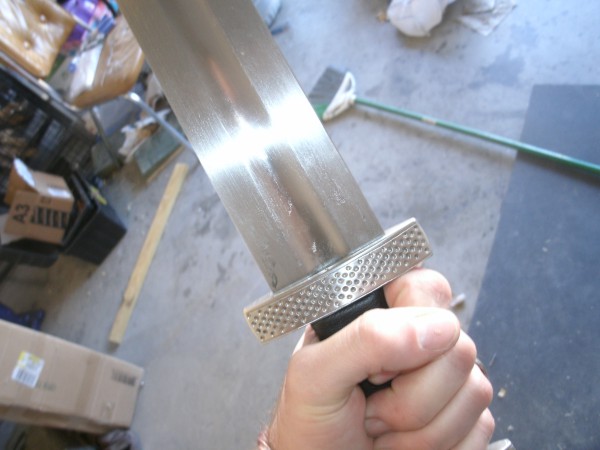 There was some crud on the blade I first mistook for corrosion but it was just some gunk mixed in with the blade oil.

The balance is quite nice, it definitely has presence but isn't unwieldy. The pommel has machine-sharp edges at the corners which I noticed almost instantly and knew would be a problem. More on that later.

These measurements are my own, not from Hanwei or KoA.

The blade starts at 2 1/8" and tapers reasonably, but it's clearly a cutter. The point is acute enough for stabbing, but not excessively so. The fuller is decently executed, though there is a bit of wobble: 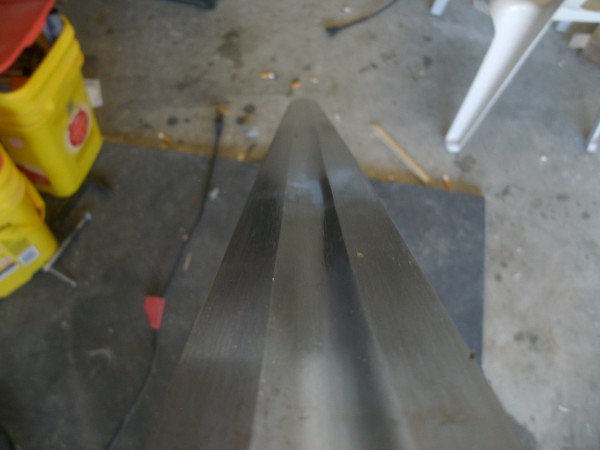 The blade is straight, very well ground and finished. The secondary bevel was very minor and will sharpen out with minimal effort - it literally took a few seconds of sharpening per edge to get paper cutting sharp. Pleasantly surprised about the sharpening! The blade is thick and rigid, which I like a lot - this also means the fuller is fairly deep, which helps it look very well defined. 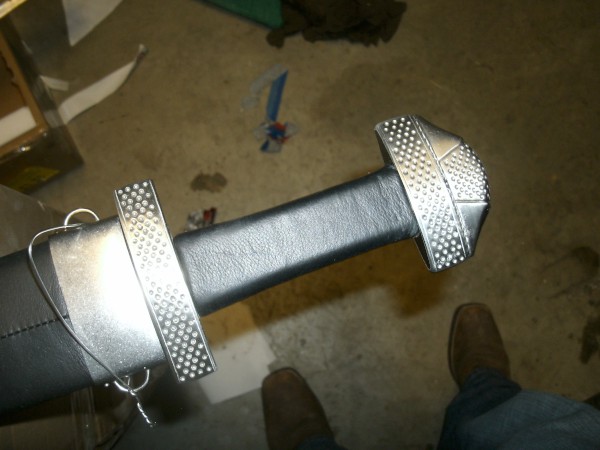 The grip I hate. It is very small and just wrong for my hands. I could move it very slightly, but there was no rattle. The leather is nice, but IMO it's too thick for the cord-wrap underneath it to be worthwhile so I think that's kinda wasted effort. 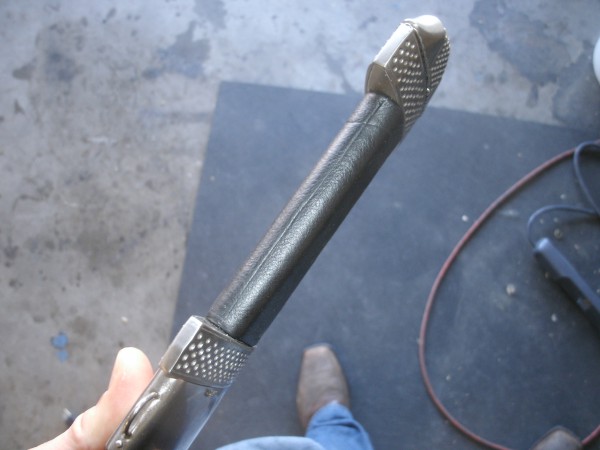 It's well done none the less, with a small side-seam and no stitching.

To make the grip problem slightly worse, it's narrowest at the middle where IMO it needs to be thickest.

The guard is beautiful. Very clean lines, a regular dot-pattern common to Norway and well fitted to the blade. It is stainless as I mentioned, and I don't like that, but it is very well done nonetheless.

Again, as I mentioned earlier, the pommel had some very sharp corners. It is, however, still very well done and a little filing took the edges off. The pommel is one-piece, but it has a wire wrap between what would be the pommel/upper guard, which is a nice touch IMO. The peen is well done and not messy looking at all: 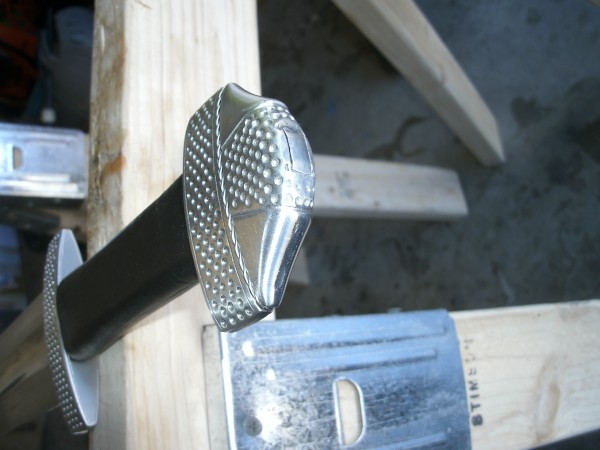 My biggest pommel gripe (and it is kinda big) is that the pommel is twisted: 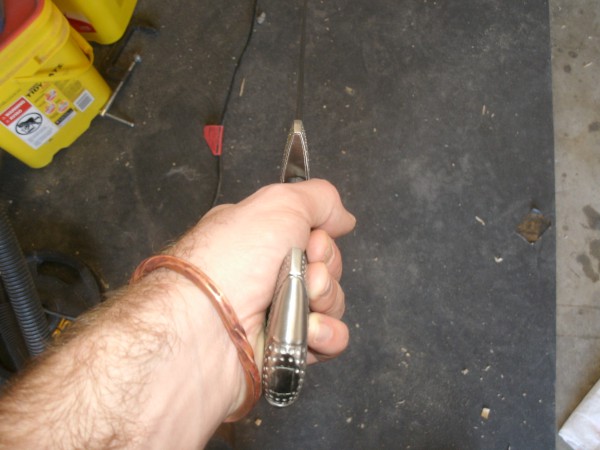 I have no idea how or why that is the case, but it certainly is. This really bugged me when I first noticed it, but it doesn't affect cutting/blade alignment (which I thought it would) and it's not that big so I'm going to leave it as is.

The scabbard is a typical Hanwei tinker scabbard - leather over composite with metal fittings; 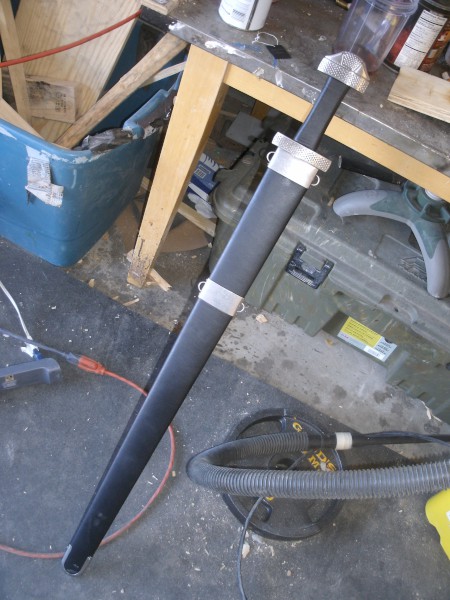 I didn't take a picture of the seam, but it's nondescript - well done and not an issue for me. The chape is nice: 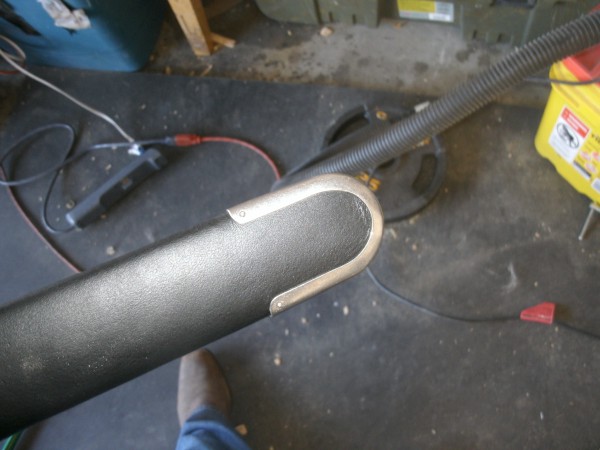 I was pleased to see a horseshoe type chape on this sword, it fits very well.
I hate the suspension rings. They're small, which severely restricts what will pass through them and I'm pretty sure they weren't used in the viking age. I'll make it work with a suspension somehow or other but it may involve grinding a couple off. All in all I like the scabbard - a little rattle but not too much, light and simple. 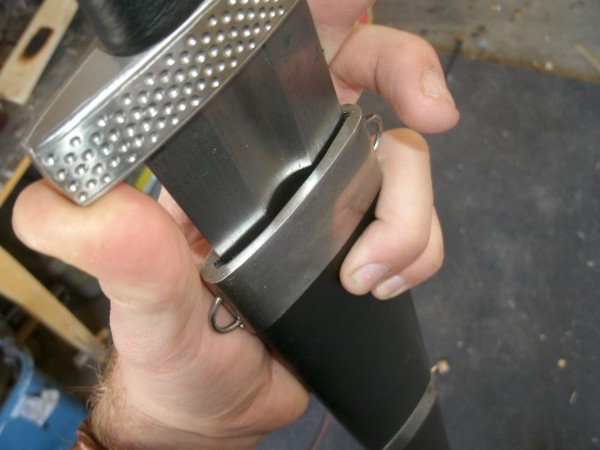 Despite the metal locket, there is little risk to the blade edge. The opening is oversized, the edge shouldn't rub the locket.

This sword does handle well, but the grip does not. The thin grip prevented me from swinging this thing comfortably and exacerbated the sharp pommel corners, even in the handshake grip. As a test I threw a 550 cord turks head knot on the grip: 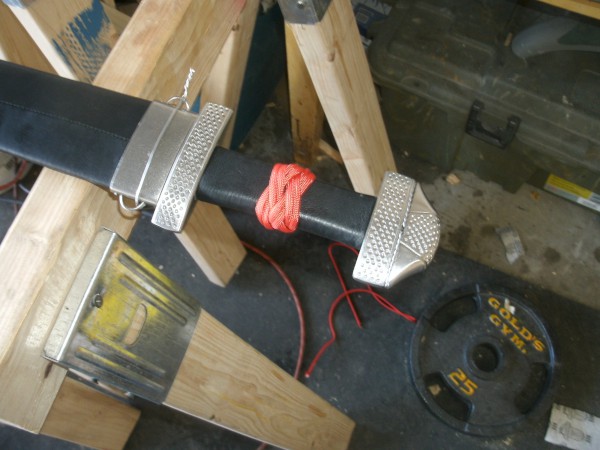 And that improved the situation dramatically. The pommel dug in less and it was way more comfortable to use.

I started test cutting with gatorade bottles. The sword was sharp enough, so I figured I'd give it a shot. 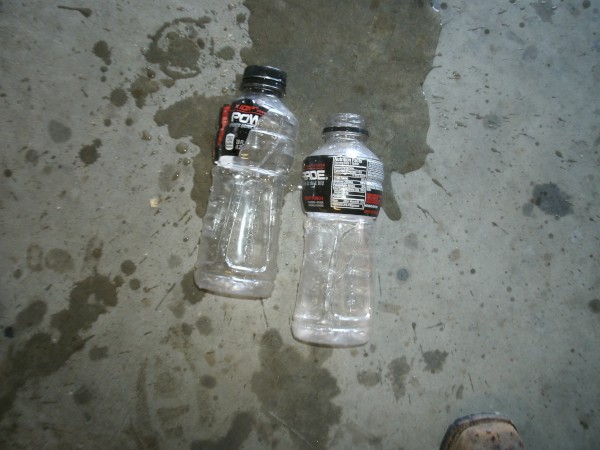 Actually quite a challenging target, Gatorade bottles are made from particularly thick plastic

Did pretty badly. I cut a little bit into one, the other got hit so hard that the bottle split and the cap flew off, but zero penetration. I even tried a milk jug and it pummeled it into a crumpled mess, but I just couldn't cut with it. The edge alignment was all jacked up. I think this was operator error because the grip was so uncomfortable. I did a little more cutting after adding the turks head knot and it was much better, though still not great. After taking these review pics I put a new grip on the sword and now I can slice rings off milk jugs quite comfortably. More on that later.

It's a very nice sword. I love it. It's more my type than any other Viking sword I've had (admittedly only a couple). The grip killed it for me at first, but after the regrip it's just about perfect. A very nice sword from Hanwei and Tinker, if it took a little work. 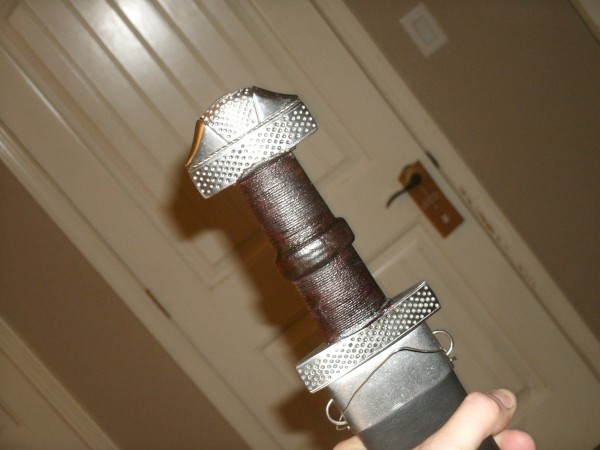 If you're OK with doing a project I'd get it again in a heartbeat. If not, I'd think about maybe doing a cord wrap or something to increase the grip diameter. The turks head knot looked good, but 550 cord wasn't very historical. Here's a pic of my regrip. it's substantially larger and it feels great to me.

As is often the case, this sword is available at the best price online HERE at Kult of Athena  just $253.95 while most other stores sell it much closer to the MSRP of $355.