Roman Swords:
Our picks for the most historically accurate low cost replicas

While there is certainly more replicas of Ancient Roman swords on the market than for any other type of ancient sword, most of them have very little, if any resemblance to the originals.

Obviously, this doesn't bother me personally (after all, my favorite Roman sword replica is Gen2's Roman Wasp Waisted Gladius which is certainly not historically accurate, but is one hell of a durable cutter!). But in this article I will only be looking at Replicas of Ancient Roman Swords that fulfill at least two of the following three requirements:

Essentially, this narrows down the selection to replicas of ancient Roman swords produced by one of two companies, either Deepeeka or Windlass Steelcrafts.

So with this in mind, let's take a quick overview look of what's available from these companies, as well as where the buy them for the very best price on the 'net.

Deepeeka of India produce replica Ancient Roman swords that in terms of functionality tend to be too heavy (with some of their swords weighing up to 6lbs), poorly balanced (blade heavy), and a bit flimsy to boot... 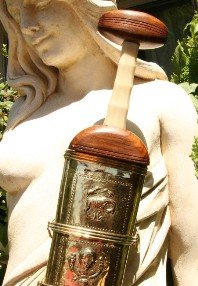 However this is to a large degree balanced out by their authenticity and extremely cheap price - with most available for slightly over US$100 if you know where to look...

While they are far from perfect facsimiles of the originals, thanks to the input of Roman reenactor Dan Peterson, they are (at least in our price range) the most historically accurate.

That said, most reenactors still feel the need to modify them, and some of their Roman pieces are considerably less accurate than others.

Probably the most authentic, most commonly available and cheapest piece by Deepeeka is the Mainz Gladius. With an average online price tag of just over US$190, it's pretty good "bang for your buck" (in fact many have commented that the scabbard alone is easily worth the full price for the sword and scabbard together!). You can pick them up for the lowest price online of US$169.95 HERE at Kult of Athena

Windlass Steelcrafts (another Indian sword manufacturing company) produce a small selection of Ancient Roman swords are less authentic than the selection on offer by Deepeeka.

Price wise, they are only a fraction more expensive (by around US$7 if both are bought at their lowest possible price).

However all reports to date indicate that this is made up for by their overall durability, better balance and lighter weight (with a total weight of around 2lbs, 6oz compared to 6lbs).

These swords are exclusively available HERE at Museum Replicas Ltd for $195, but use the SBG coupon code (sbgweb) and you can take 10% off the price bringing it down to a more reasonable $175.50.