Very rarely do you find a halfway decent replica medieval sword at anywhere near $150 unless it is on closeout sale or purchased on the secondary sword market (forum classifieds, eBay. etc).

And not all that many people are willing to gamble on it when for $50 more a whole world of options opens up.

But our intrepid reviewer took the plunge, and it seems - well, it seems he may have found one of those rare 'jewels in the junk' in the Deepeeka Spadona Sword.

For several centuries the single handed sword had served the warrior as his standard sidearm, and would continue to do so throughout the Middle Ages. By the mid-13th century it was felt that a larger and more powerful sword was needed to deal with the improving body defenses then in use.

The result was a sword that would become a battlefield mainstay, in one form or another, and would remain so throughout the Middle Ages, and into the early renaissance. In its early form this sword was referred to as Espée de Guerre ("Grete war sword"), as well as many other names which ably described both its size and purpose.

These swords were what we today call a "Hand and a Half" sword, or rather swords that can be utilized for either one-handed or two-handed use.

The original this replica is based on

The original sword is now housed in the Museo Civico L. Mazolli, Brescia Italy. This sword dates from the mid-15th century, and features a blade that was manufactured in southern Germany in the famous production center of Passau. This blade was then exported to Italy, where an Italian cutler mounted it on a hilt of the latest fashion. 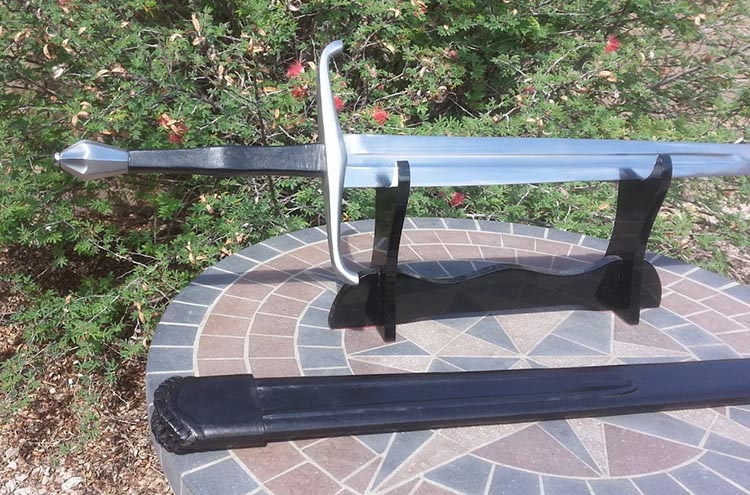 The blade is straight, although it is clearly handmade. The edge thickness varies a good bit, but for the most part the edge is about the same thickness as an unsharpened Windlass blade. The fullers are not very well done, particularly at the base of the blade. They also extend up the blade further than they should for this type XVIa blade.

The grip may be the least impressive part of this sword. It is very plain (almost crude) in its design. It is comfortable in the hand though. 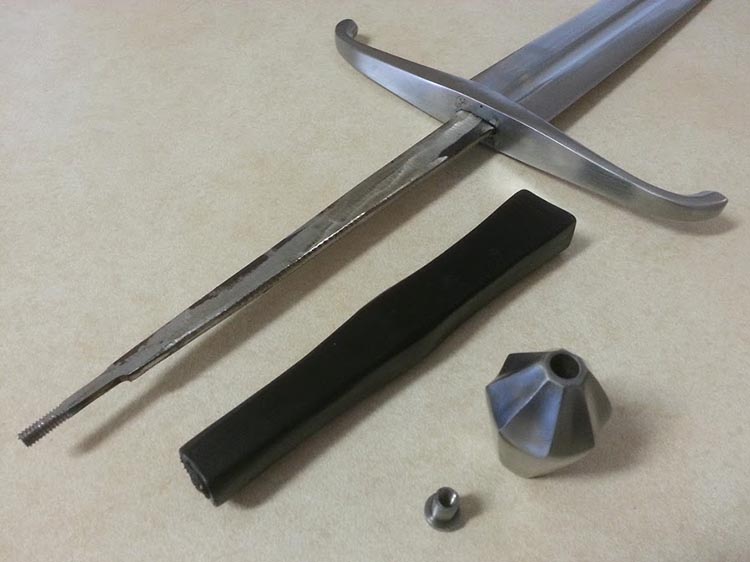 Having said that, one of the pleasant surprises that I found when I removed the hilt was that the wood core is tightly fitted to the tang. 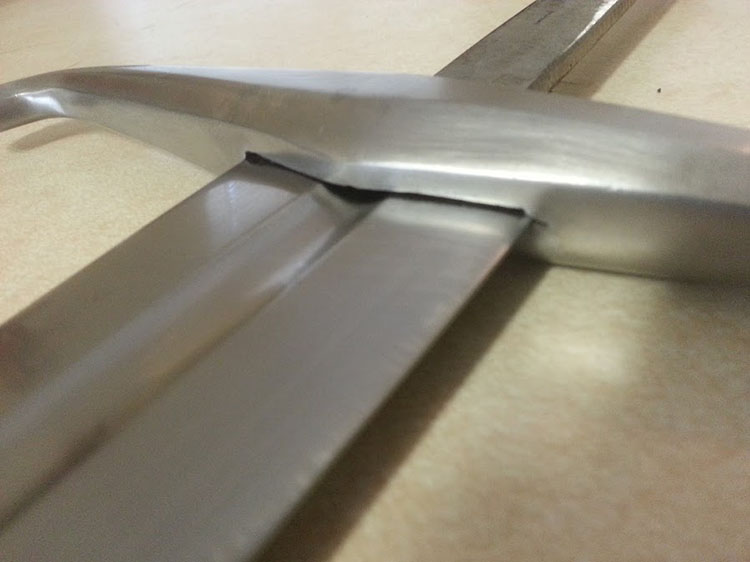 The guard is not unattractive, but it is certainly much more bulky than the original sword.The guard slot at the base of the blade is not very tightly fitted, but the tang slot in the back of the guard is very tightly fitted to the tang. I had to pound on either side of the guard a few times to loosen it enough to remove the guard. This is excellent! I wish more swords in this price range (or even twice this price) were made this way. 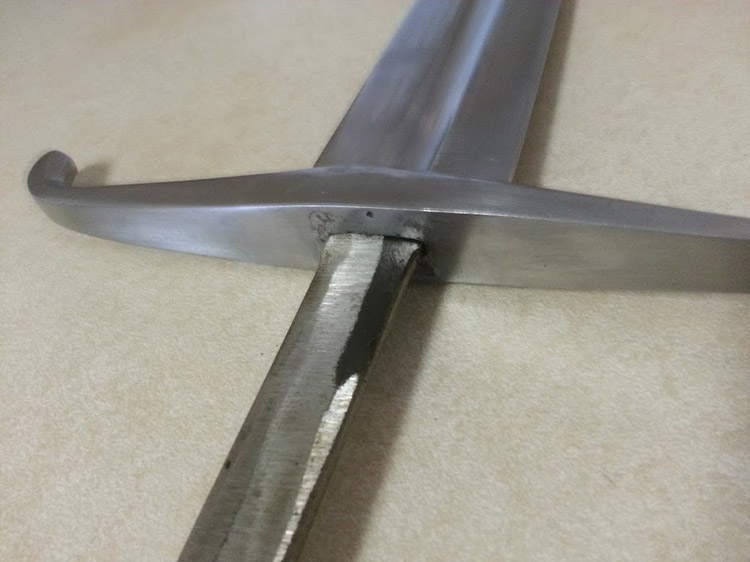 The 8-sided pommel looks well executed. It is attached with a pommel nut. The threads appear to be cut into the tang (no weld). 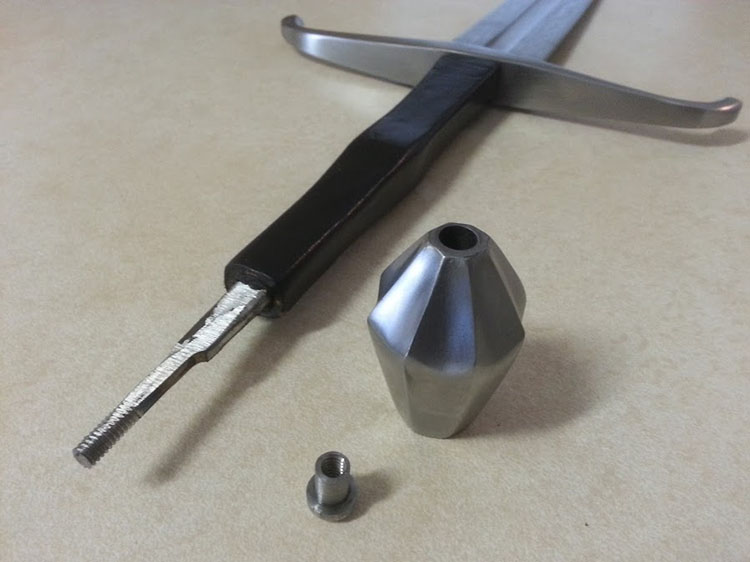 I have been consistently impressed with the quality of the Deepeeka scabbards. This one has a wood core that fits the blade tightly enough that it can be turned upside down and shaken vigorously, and the 3lb 11 oz sword does not fall out. The tip does rattle a bit, though. The leather is nicely done, including the stitched leather rain guard. I have also owned a viking sword from Deepeeka and the scabbard was the best part of it. I don't have that viking sword any more, but I still use the scabbard on another sword.

I cut some single tatami mats with this sword. I spent 4-5 hours sharpening the blade prior to cutting with it. The edge was pretty thick. The sharpened sword performed fairly well (it also cut through the poplar dowel peg with no problem!)

I then decided to try a tougher double mat target to test the performance and durability of the blade. The sword didn't completely cut the mat and took a slight set. I was able to straighten it over my knee. I then performed the same cut, as well as an upward diagonal cut, with my Borderwatch to compare the cutting performance. Not surprisingly, the much more expensive Albion blade had no difficulty performing the same cut.

The Deepeeka Spadona performs surprisingly well for a $150 sword. While not as refined and robust as much more expensive swords, it has proven to be quite capable, once properly sharpened.

As Aikidoka mentioned in his review, the only place he found the Deepeeka Spadona for sale outside of Europe was (is) here at Kult of Athena, where it sells for a very reasonable $164.95 (plus, there are some less than perfect examples sold for just $115.95 for munitions grade!).