The Practical Wakizashi by the Paul Chen Hanwei Forge was the first affordable Wakizashi ever to hit the market, and for many years when paired with the Practical Katana (reviewed here) was the only way for serious collectors to own a low cost functional Daisho set.

Over the years, the situation has changed somewhat, and there are more Wakizashi options out there - so how does it hold its value against the influx of competitors swords. Well, let's take a look..

I purchased this sword at an excellent price (approximately $120 USD) from a private individual(s) on eBay. The sword was not brand new when I received it, as such there can be no certain assumptions made that any fault I find with the sword are the responsibility of Hanwei/CAS and not of the previous owner(s).

I have also lacquered the Ito, so consider the appearance to be modified from what you might expect in a new Wakizashi from Hanwei.

I am by no means a sword-expert, I can offer nothing about the historical accuracy of this blade with regard to period or utility and can merely offer my opinions and observations as an enthusiast and a backyard cutter and a lover of blades.

I'm a slight, light guy. My observations are made from the standpoint of someone who is by no-means "big".

One thing I noted immediately was the plastic same. I had prevously (and incorrectly) thought the same panels on my Ronin Katana were plastic because of my inexperience (I have since learned that they were authentic rayskin lacquered black) but the same panels on the Hanwei were weird! They have since ceased to bother me after the lacquering process, more on that later.

The next thing that grabbed me was the size and thickness of the tsuka (I rather suppose I grabbed it first, what would a tsuka look like grabbing a person?). The tsuka has at least 1/4 of an inch in circumference on my other wakizashi (an eBay wak) which itself measures 3 and 3/4 inches. 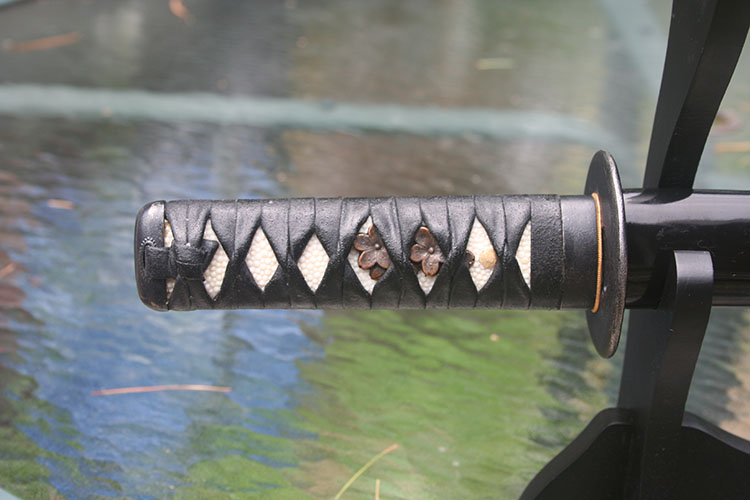 The sword feels compact and well weighted when stowed in the saya. Prior to removing it I noted that the ito was made of something really peculiar, there was no discernible weave but it was absorbent like cotton. I didn't like the feel of it, it felt like psuedo-suede. Along with the plastic same it really put me off. It was also weird. 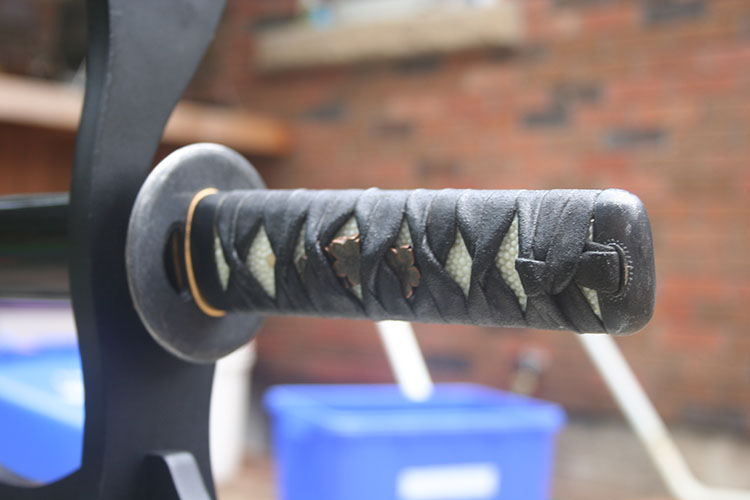 The single mekugi peg is really nicely finished. It's got a shape just like an upside down bowl. It seems to be immobile and I believe the tsuka is epoxied to the tang - perfect for cutting! 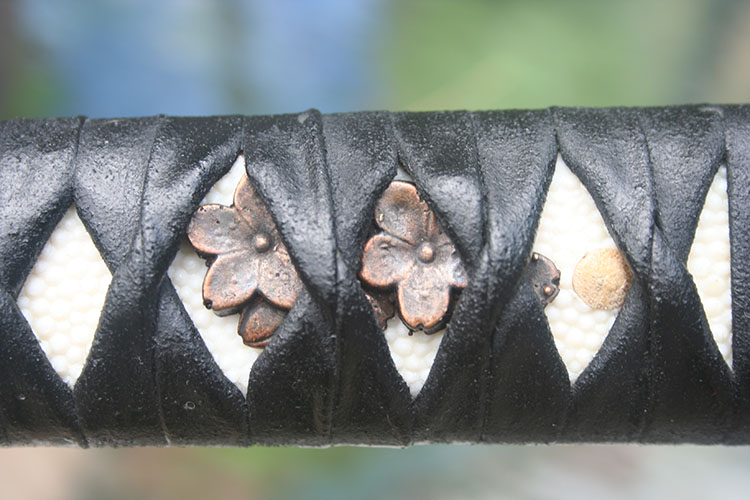 The tsuba, as opposed to the textureless ito and "rayskin", is really quite lovely. I like how smooth it is and the finish is neither garish nor too plain, it's refreshingly simple. It's also probably one of the primary reasons for my interest in this particular wakizashi - they don't seem to commonly come in such simple flavors at any price level or from lines I have considered buying. 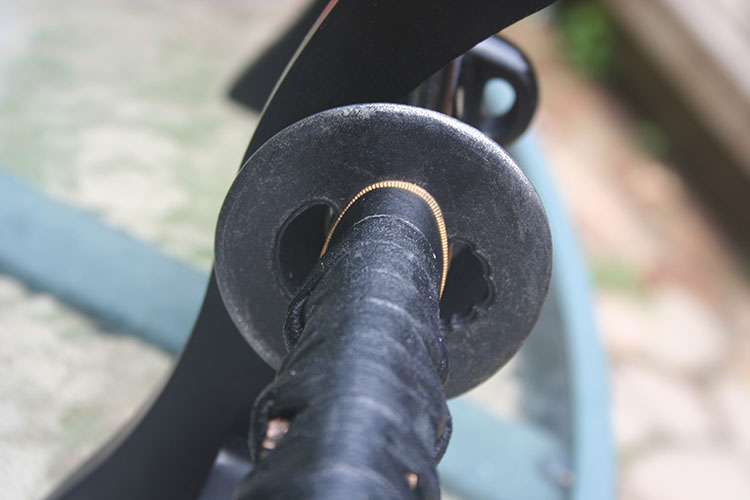 It feels excellent against the thumb and top of the hand, the primary benefit of it's simplicity is that it's neither abrasive or intrusive. Notice that the pierced holes (hitsu-ana, I believe) have two separate and distinct forms. I'm very pleased by the way this looks.

Removing the sword from the saya I found the blade surprisingly slim. I don't mean to indicate the the spine is thin or flimsy (it is certainly neither of these things!), rather that the blade is not particularly wide near the tsuba and tapers off to a very wicked point. My eBay wakizashi is about 1 and 1/3 inches near the tsuba and this Hanwei must begin with just shy of that figure and tapers to about 0.7 inches before the kissaki area.

The brass that the seppa and habaki are made of have a lovely glow. Despite being a little tarnished from storage they still have a very orange hue about them as opposed to a cheap gold tone you might see an a sub $100 or eBay forge sword. The seppa are not perfectly ovular but they look good and it match the size of the mouth of the saya perfectly, making for a good seal. 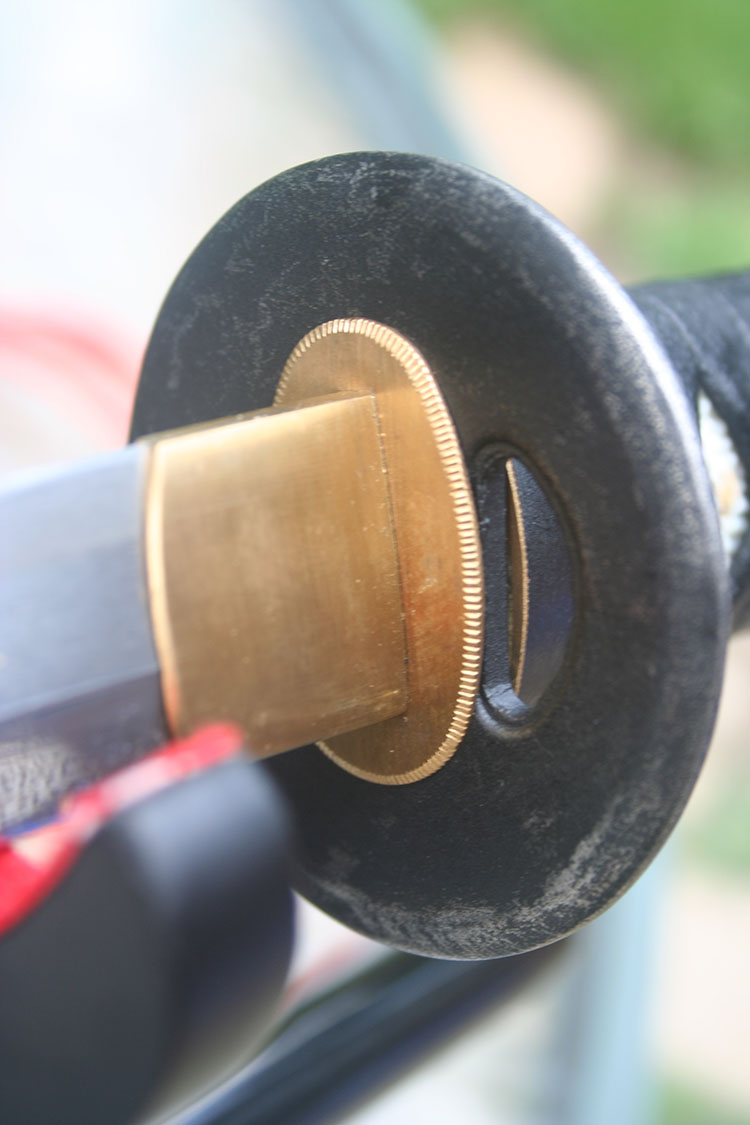 The habaki is quite flush with the blade, perhaps slightly off-center at the front but that would be only just slightly. the finish of the blade is great, just see the above picture. There's a very fine polish not unlike a cross-polish all along the geometry of the cutting edge of the blade and a lovely even shine all along the spine. The methodology here doesn't seem entirely unlike the logic behind the rough-out boots and belts used in WW1 - a utilitarian finish well executed can help prevent damage and maintain a healthy appearance under use longer than something with a lot of smooth polish. 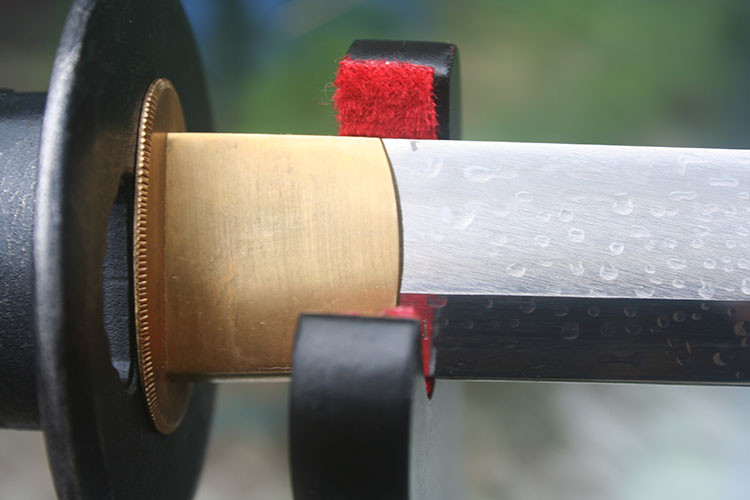 I initially believed the sword is through-hardened. I have since learned that the blade is differentially hardened. The hamon isn't immediately apparent and appears as more of a subtle line than a cloud.

Look just to the left of the habaki in the above picture and you may be able to discern the line to which I refer, it's partially hidden by the blade polish.

Initially the ito was very pliable. The more I swung the sword the more disheveled and misaligned it became. The same panels are a little scant. If the ito moved more than a couple of millimeters the wood core was revealed. I took the time to use the blunt side of a knife and a chopstick to reposition the menuki to a comfortable location and reform the shape of the ito as best as possible. There is still a little exposed bit of wood here at the bottom. 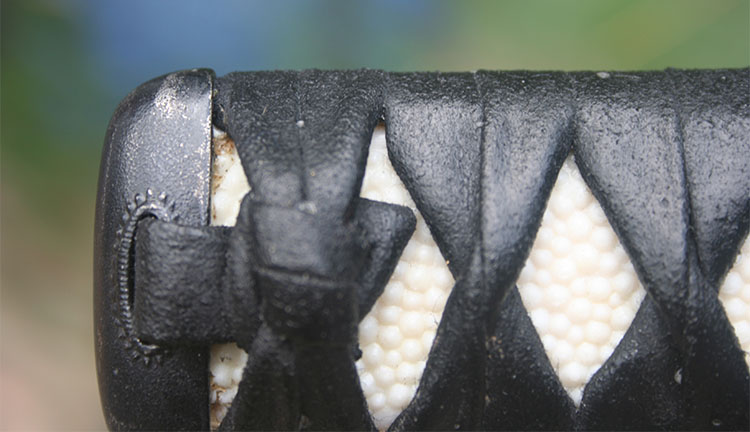 I'm fond of the menuki, they're different on each side. One side bears 3 flowers (chrysanthemums?) and the opposite only two. They're at least 2/8ths of an inch thick and seem very sturdy. They fill the palm nicely (this is after I positioned them for myself, remember) and are comfortable throughout the swing. 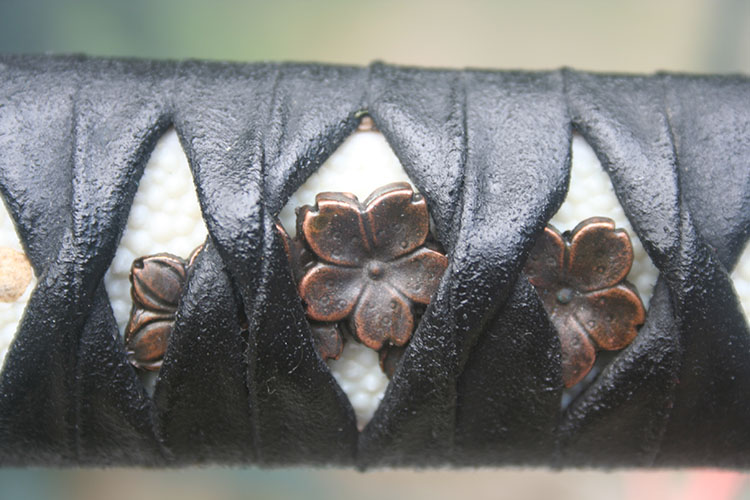 The plastic same bothered me much less after the laquering. Once the ito was re-positioned and flattened a little bit and there was good coverage of the same I felt the appearance was much improved. The "nodes" look significantly less like marshmallow and are much less garish when largely obscured by the ito. The fuchi is plain and iron, fits the tsuka well and doesnt shift a mite.

The Kashira is fine but it throws me off. I feel like it ends too abruptly, it's too short and it doesn't visually integrate well with the rest of the tsuka. Maybe it needs a ridge near the knot or something, either way this is merely a personal remark and not a detractor. It's structurally sound, doesn't wiggle and does the job. 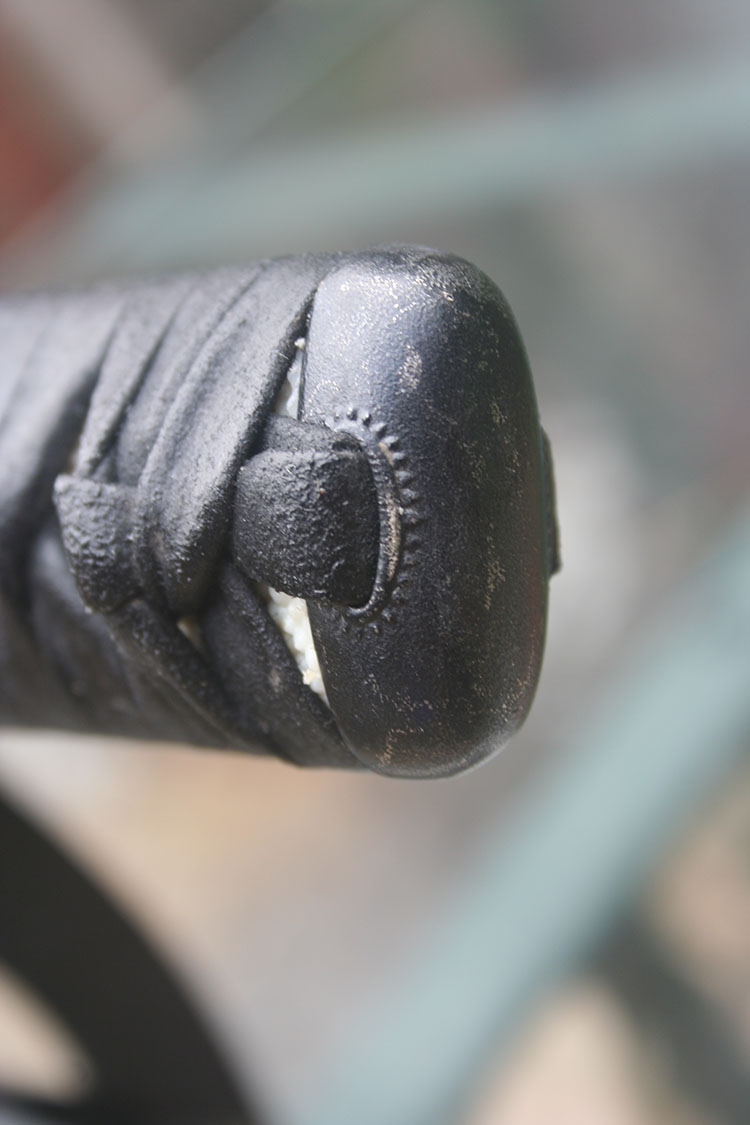 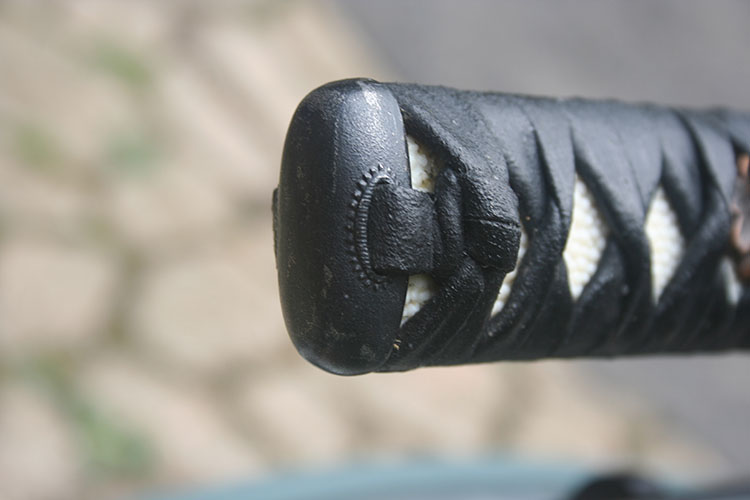 The knots are quite good looking, the strange ito material notwithstanding. 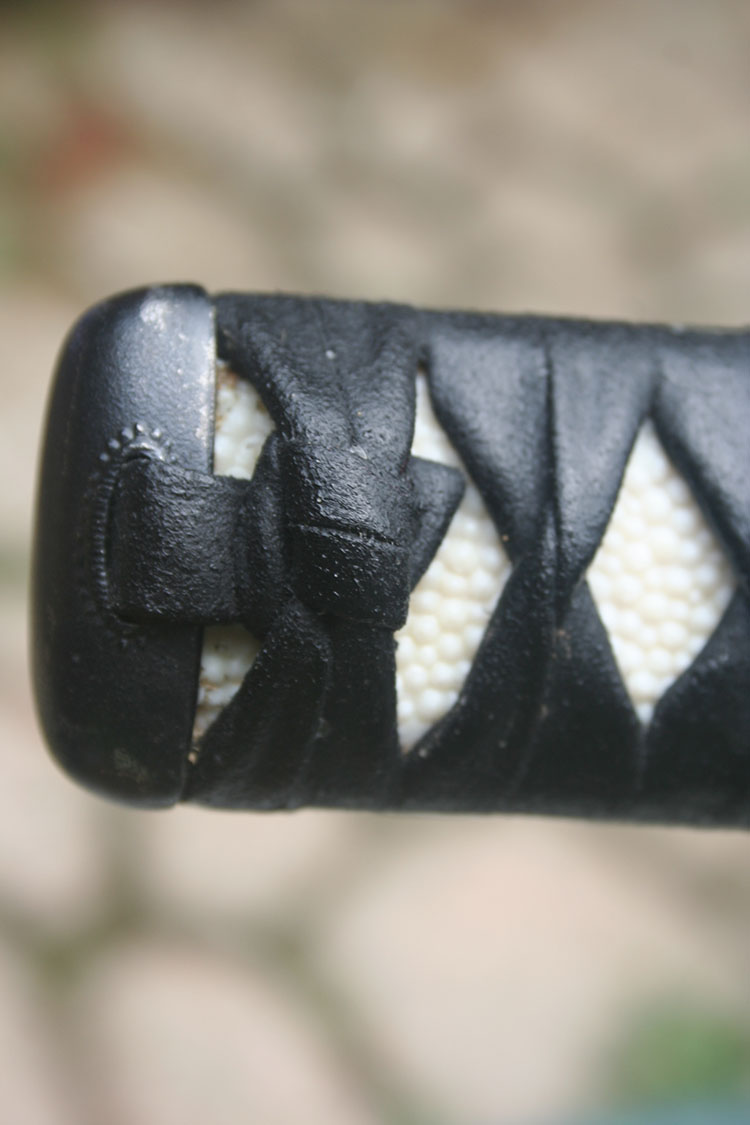 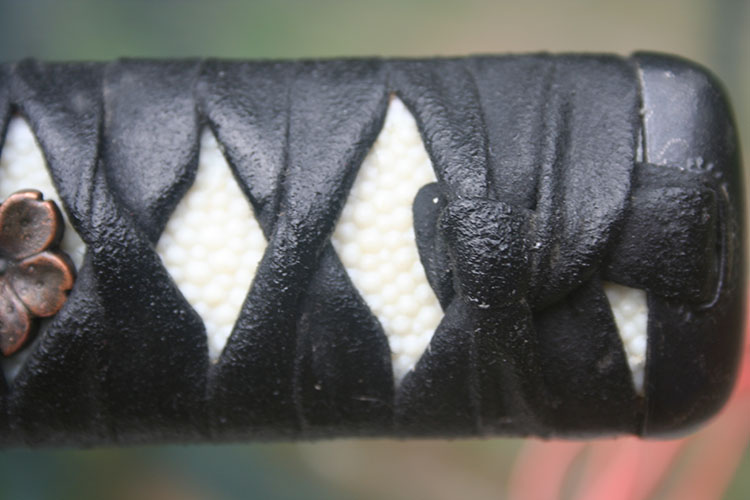 The mouth of the saya is nothing special, as far as I can tell. The file marks look good but are a little off in some places. It was really a snug fit when I received it but the fit loosened after quite a few draws and replacements. It wasn't quite so loose as to simply fall out though loose enough to be irksome. A swab with a light layer of wood-glue just inside the mouth tightened it up with the habaki nicely. 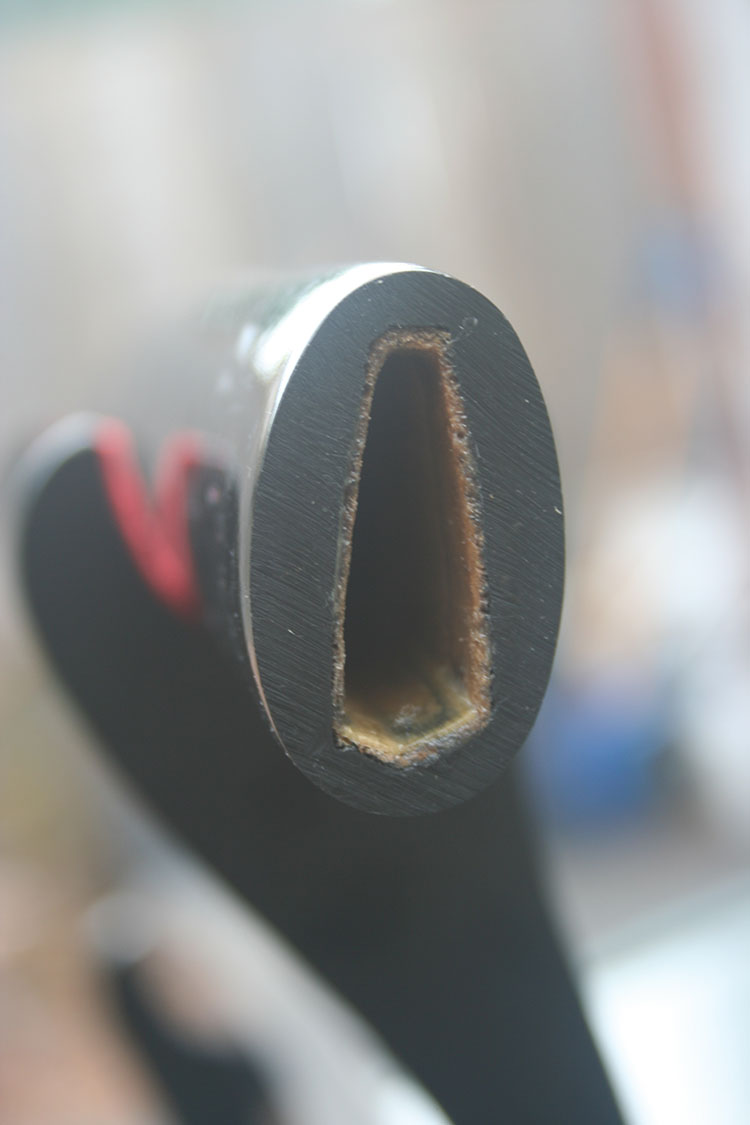 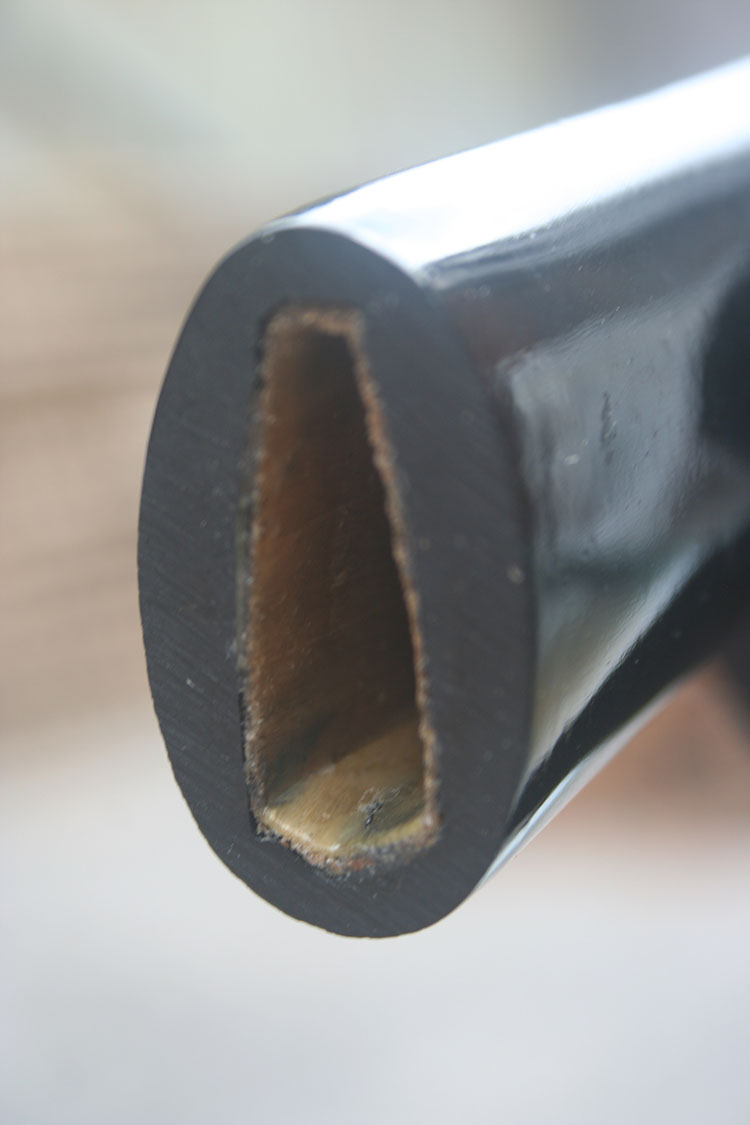 The kurigata is pretty cool - it's not too thick and is laquered all the way through, no shitodome. My sword didn't arrive with a sageo, so no comments there. 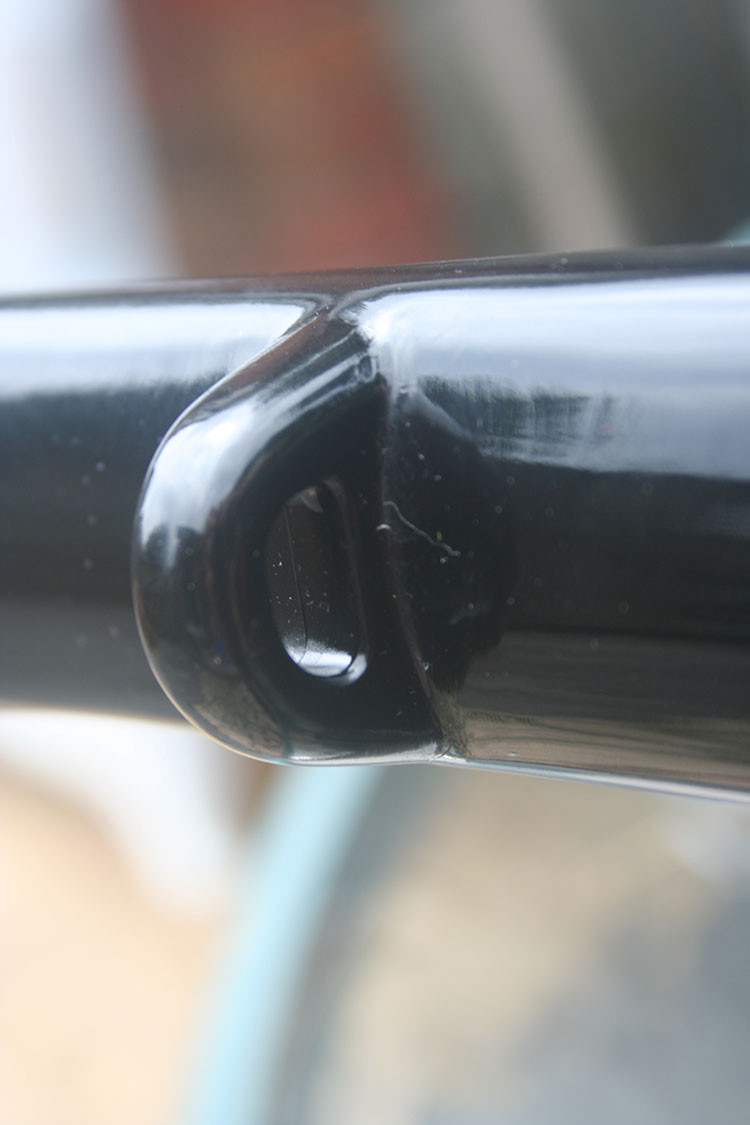 I really like the termination of the saya that came with this sword. It has an interesting shape I haven't commonly seen in photos. 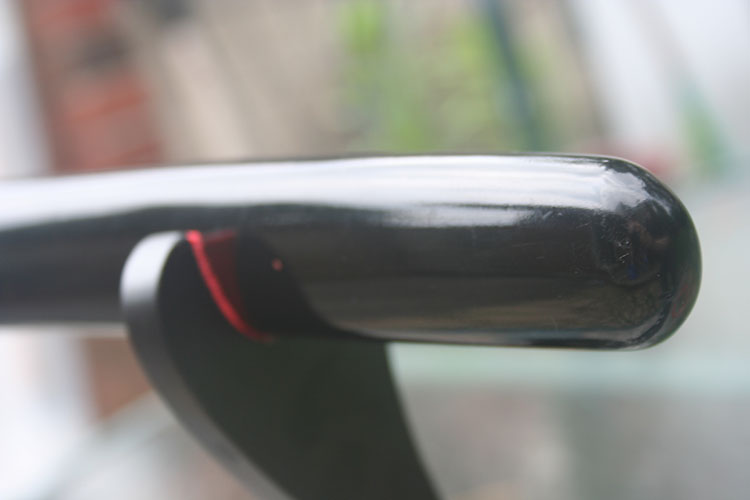 The sword feels good in the hand, tsuka heavy though not unbalanced. It cuts like a dream, it easily handles water bottles and laughs off heavier fare like gallon jugs and even gatorade bottles. At times one doesn't even feel the sword cut through the target, it merely passes through and leaves clean halves. It has an edge that doesn't seem to easily take damage from careless mistakes. My brother thrust the sword into the ground on a low swing and the edge didn't seem affected (there are lots of pebbles and rocks for a blade to be hurt on in the yard we tested in).

I never felt especially compelled to switch swords while using it. The day we tried the sword for the first time we had over 300 bottles filled and the wakizashi was used for at least 50 bottles by each of the two testers, likely more. It was comfortable through extended use. The point tracks well and pierces excellently. It's relatively simple to hit a thrown bottle with a thrust.

I feel the the overall value of the sword is good, and that it's well suited to the purposes of cutting. It's not much of a display sword with its plastic same and its (really weird) suede-like ito, but it fits comfortably in the hand with minimal modification (I suspect it will be yet-more comfortable to people with larger hands than I - thick tsuka!) and the ito is easily secured to prevent unraveling.

The plastic same surprised me, I suppose I just expected Hanwei to use the real deal despite never having researched Hanwei products.

The tsuba still impresses each time I pick up the sword, love the feeling of it against the top of my hand at-the-ready. I can cut for extended periods of time without discomfort.

The sword cuts easily and provides consistent results without fail, a pleasure to use.

If I were to recommend changes to the model I would recommend that the tsuka be revised. In my opinion it's the lesser part of the sword in terms of visual cohesiveness and utility. It could do with a little waisted shaping, a different ito. I'd be happy to see an authentic same on it, though this would certainly escalate the retail price above $200 new on KOA. Lastly I'd tell Hanwei to do something about that kashira. Looks like a little girl's sock on a grown man's foot.

At $184 on KoA I would recommend this sword new for anyone who desires a functional, comfortable wakizashi that is designed for cutting and for use. I would say that it holds up well to a little abuse and that it's well made enough that you can buy it second-hand and still use it with gusto, as I did.

As Aldarith mentioned in his review, the Practical Katana is available HERE at Kult of Athena (KoA) for $199.95 - while most other places sell it for closer to $250 all the way up to the MSRP of $280.

At that price, it is a 2 star sword, but for $200 - the Practical Wakizashi with all its shortcomings is a 3 star sword representing pretty decent value for money, and even better when paired with the Practical Katana (reviewed here).