Sharpening Katana is in its highest form is both a spiritual and an artistic endeavor. The process is properly referred to as polishing Katana rather than sharpening Katana, and in Japan is not done by the same person who actually forges the blade, but by a specialized artisan known as a Togishi.

A matter of life and death

Why was the polishing and sharpening of a Katana so important to the historical Samurai? The real reason according to modern day swordmaster Isao Machii was that a properly polished with a perfect mirror finish would make the blade disappear when held at the correct angle, thus not allowing the opponent to see how long the blade was! Read the article here on Kotaku.com to learn more

The polishing of a Japanese sword, which began as a formal art form in the Kamakura period (1192-1333) is these days conducted in Japan by a handful of specialists called Togishi, who are heavily regulated and licensed by a governing body known as the NBTHK - Nihon Bijitsu Token Hozen Kyokai - the Society for the Preservation of the Japan Art Sword.

The society was founded in 1948 to save what was a dying art after the end of World War II and was allowed exemptions to a nationwide sword ban that is still in effect in Japan to this day.. (yes, it is extremely hard to own a real Katana in Japan - you need all kinds of paperwork, jump through numerous hoops and keep the thing locked away securely at all times..Read more about the legality of Katana around the world here).

As such, these men (and they are all men) are considered to be national treasures, and are rarer than swordsmiths because their apprenticeship is TWICE as long as the smith who makes the sword (5 years for a smith, 10 years for a Togishi!).

Below is a video featuring Okisato Fujishiro - Japan's LEADING Sword polisher and sharpener at an exhibition in Japan, explaining the art while his apprentice son demonstrates the techniques..

As you can see, it's a serious and solemn business with deep spiritual overtones - with the polishing process revealing hidden particles within the sword - soft and hard, clouds and sun..

Working 10 hours a day, 6 days a week (just like the smiths) it typically takes 10 days to polish and sharpen a Katana the traditional way - around 100 hours per sword - so it is little wonder that traditionally made and polished Katana typically have price tags in the tens of thousands of dollars..

Sharpening Katana at Home in the Garage..

Now I don't know about you, but I don't have 100 hours available to set aside to polish and sharpen my swords, and I am guessing you are in the same boat..

Thankfully, some innovative sword collectors and enthusiasts have come up with their own way of shortcutting the process as it is quite common that most entry level functional Japanese sword replicas are not as sharp as many collectors would like them to be.

There are several reasons for this - mostly that it's totally impractical to expect a blade that actually IS hand polished (in addition to hand forged, mounted in fittings, packaged and shipped half way around the world) to have 100 hours of labor on the polishing to get the same level of perfection as you may find with a $10,000 Katana.. (kind of goes without saying really).

But actually many entry level swords have at least 2 -3 hours of manual polishing in there. Our very own Forge Direct Katana line, which are at the top end of production Katana made in China at around the $900 mark, have a full days polishing go into them by a qualified Chinese Togishi equivalent. 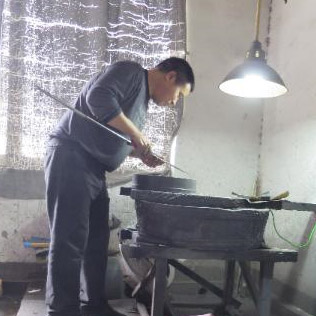 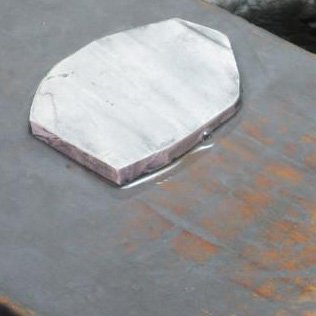 One of the high grit stones used

But most others are polished by teams of blue collar workers who aren't bad at what they do, but after 3 hours of polishing they can only do their best and some deeper scratches or imperfections are pretty much par for the course.. 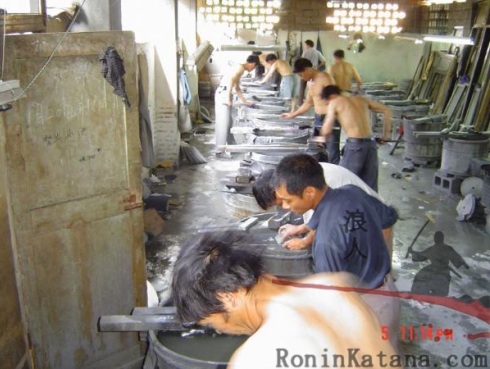 Mostly, swords hand polished in China get around 3 hours here

At the end of the day, if you don't want to pay for the extra costs of hand polishing, you can opt for the DIY approach. Here are some tutorials to you you started sharpening katana either by hand, or even quicker, using a belt sander..

The basic techniques of both hand sharpening using nothing more than some sand paper from 400 to 2000 grit, a piece of wood, some oil and lots of time and elbow grease is explained here in our article Universal Sharpening by Tom Kinder.. 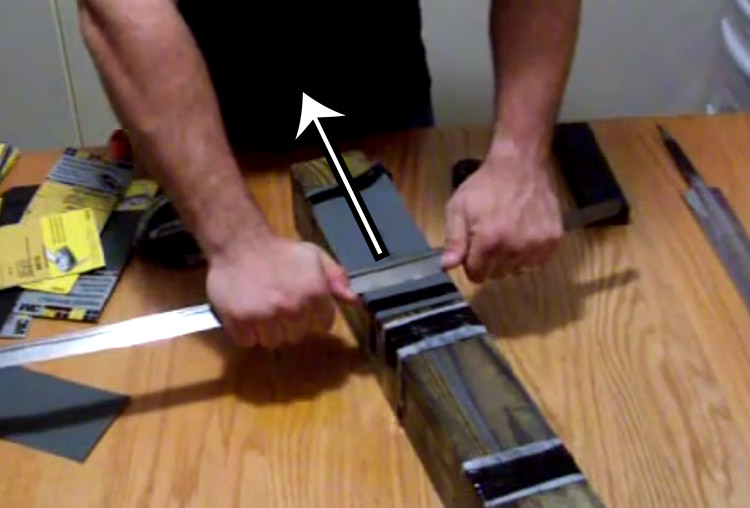 But in the same article and video tutorial, there is a demonstration of sharpening Katana with a belt sander, and finishing up with some compound and leather on the sander to achieve razor 'stupid' sharp blades..

Another useful shortcut method is explained in our tutorial Polishing Without Zen..

In this article you will learn some pretty nifty tricks and techniques developed over 50 years by a SBG senior member in record time using simple household items..! Very clever - though not very spiritual..

These techniques work best on blades without a hamon - otherwise the hamon will be obscured, even though it is still there in the blade somewhere beneath the mirror polish.

However, one additional trick to bring out the details of the hamon back is to do an acid etch. Below is a quick video tutorial showing you how.

By combining all the short cut techniques, you can take any production Katana and give it a mirror polish with a razor edge and prominent hamon..

Sure, it's not exactly spiritual or going to turn you into a Togishi. But with these simple techniques, pretty much anyone can - with enough time and patience - make a sword as perfect as they want regardless of how much money was spent to procure it.