Cheness Cutlery specialize on a range of economical entry level Japanese swords for Iaido and Kenjutsu practitioners since 2005 with a particular emphasis on the blades as one of the only companies able to properly temper 9260 Spring Steel.

Manufactured in:  Hand Forged in China

With a focus on making the best functional blade possible, and mounting it in very simple ‘no bells and whistles fittings’ – Cheness Cutlery are more popular with Japanese Sword Art practitioners and Dojos rather than collectors looking for a ‘pretty art’ sword, though naturally their customer base also includes a large number of ‘backyard cutting’ sword enthusiasts.

Because the emphasis of the swords is on the tempering of the blades with the fittings and polish taking a back seat and - as explained in their very honest and forthright 'what to expect' page:

"After receiving the sword, you can adjust the components, add a high-grit diamond paste polish, deburr the blade to slice paper, polish the components, etc. to make it as refined as you choose. However, these are not the features we strive for and should not be expected of the sword out of the box. If a highly refined sword is what you are after, you will either need to be prepared to perform these refinements yourself or should purchase a higher end sword from a different manufacturer."

Owned and operated by Paul Chen (not the same Paul Chen as Hanwei), their most revolutionary and unique concept to date is the use of 9260 Silicon Alloy Spring Steel, creating a range of functional Dojo Katana that have a solid reputation as the toughest and most durable Japanese swords on the marketplace.

Cheness swords quickly found its niche with its line of ultra durable monosteel Katana, Wakizashi and Ko-Katana (Wakizashi length blades with Katana length handles). These blades are easily the toughest and most durable swords on the market, able to be bent up to 90 degrees without taking a set (permanent bend) yet still feel as stiff as a normal Japanese sword should and have a thick ‘hira niku’ profile, making for heavy duty swords that cut well above any other swords in this price range.

The success of the original line of 9260 Daisho spurred Cheness to delve into niches that the ‘big boys’ usually ignore – such as O-Katana, the SGC (Specialized Goza Cutters) and the Oniyuri Bujinkan Katana (Shinobigata/Ninjato). These unique ‘semi custom’ swords have been very well received by taller practitioners, at cutting competitions and by members of the Bujinkan Federation.

While their focus is primarily on Dojo cutters, Cheness have not ignored the casual collector – with several blades including the Laminated Higo Katana, the folded Kochou and the Differentially Hardened Kanbai. Most of these have been phased out (though the folded Kochou is still available) – however there was one Differentially Hardened Katana, the KAZE (made from 9260 Spring Steel!) that is perhaps their most popular sword to date – primarily due to it being described by many as being as strong and effective as traditional Katana twice the price and the clean line of the natural suguha hamon.

Easily the lowest priced iaito on the market, Cheness Cutleries range of non-sharpened training swords are exceptionally popular with dojos around the world and make an excellent alternative to the standard (rather lightweight) zinc alloy swords typically used for dojo practice. Weighing as much a real Katana, the general consensus is that these swords are seriously under-priced and could be sold for double the current price and still be considered to be a good deal.

Cheness Cutlery swords are all hand made from start to finish, though the emphasis of production and expense is focused on the blades, which are forged by hand, shaped to the eye, and then tempered and quenched. 9260 Spring Steel contracts and warps much more than most other steels and retains strong 'memory' so they will always be less than straight as a lazer.

They are then sharpened, leaving a considerable amount of niku 'meat' on the blade for heavy cutting and are designed for traditional tameshigiri against tatami mats and bamboo. They are not paper cutting sharp, nor should they be - but can be refined if so desired using the methods explained elsewhere in our sharpening section of the main site here.

Fittings are very basic and are suited to buyers who will take the time necessary to refine and/or personalize them rather than simply buying a much more expensive sword.

Again, from the what to expect page:

The tsubas are mounted on the nakago by hammering around the nakago ana to close the gap between tsuba and nakago just before assembly (instead of shimming by wood pieces after). Ito is tight enough for use, but is not going to be the tightest out there (cotton braid ito naturally has some stretch to it, as opposed to silk or leather). Habaki, seppas, tsuba fuchi, kashira are free-floating and pinched into place by friction forces of the neighboring components as a traditional katana is, so may sometimes need minor adjustments.

It is unusual for a company to be as transparant about the limitations of their product lines as Paul Chen from Cheness has been. Below is an older video he made showing his forge in action: 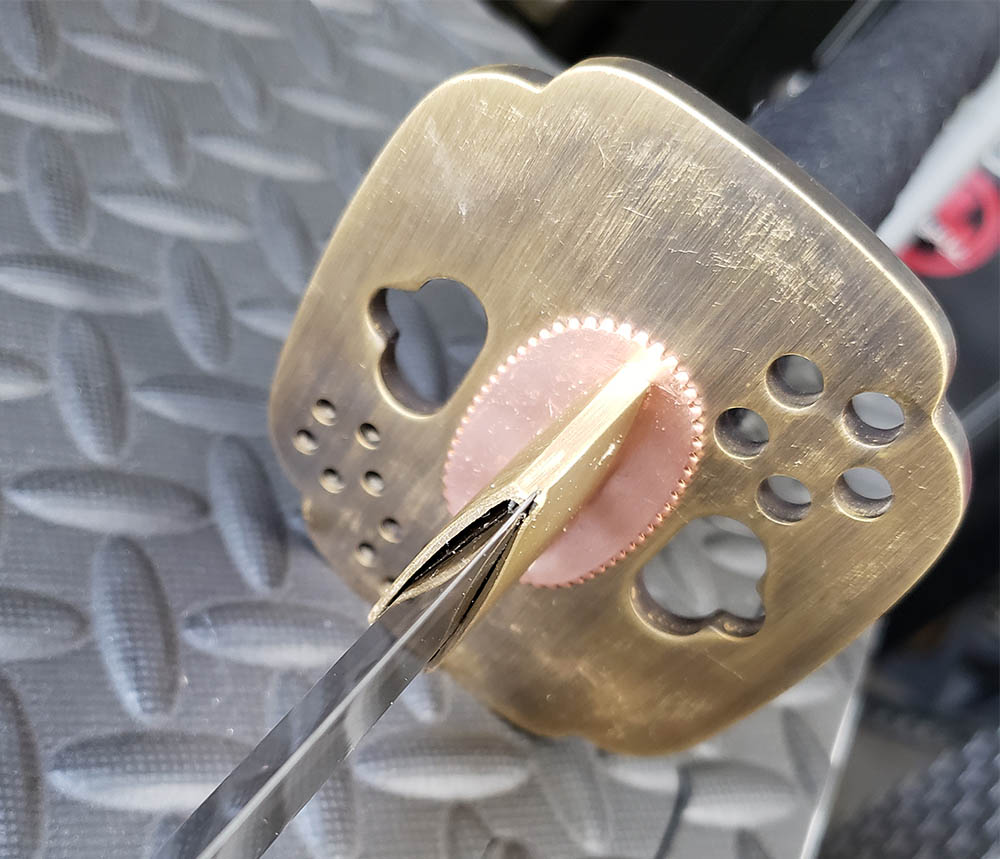 A little rougher than usual, but is the result of the friction fit and other cost saving measures

As Cheness Cutleries QC concentrates on the integrity of the blade and overall functionality for martial artists and dojos, cosmetic issues are to be expected and are par for the course. Blades may leave the warehouse with a few cosmetic tool marks and scratches here and there. There may well be a bit of wood peeking through thin same (ray skin) panels or worst case scenario – the tsuba and handle may rattle slightly and need to be adjusted. However, it is extremely rare that these issues effect the swords primary intended purpose – i.e. overall functionality for traditional martial arts practice.

In their own words:

"We practice in JSA and use our own swords and have had the guidance of many generous senseis and develop our own refinement over the years. There are features that we developed and may not be the same as swords from other manufacturers. We do not just copy designs, and the swords that we make are the ones we would buy and use. They may not be suitable for every practitioners or collectors out there, but are what we would like at the prices we would pay for ourselves."

There were some reports in the early days of the companies conception (when there was basically no sub $300 sword market) that many of the tsuka cores were cracked upon disassembling the sword (which Cheness actually advised their customers to do before using ANY Katana, either from them or any other Japanese sword manufacturer).

How many of these tsukas were cracked during overzealous disassembly (as noted, they are hammered on VERY tightly) or were not actually cracks but simply the join betweem the two halves of the tsuka core and misidentified (i.e. all tsukas have a seam down the middle where the two halves are glued together that ‘looks’ like a crack) has never been quantified. Regardless, the Japanese themselves appear unconcerned about cracked tsuka - click here for more information on why this 'issue' may not actually be much of an issue at all..

To address this, Cheness upgraded from standard to hardwood tsuka handles and added a second brass peg on the advice of several high ranking JSA Sensei and respected members of the community. However, at the end of the day, do not buy these swords if you are not a DIY type or wish to learn how to properly maintain and modify a Japanese sword.

Finally, Cheness have VERY strict return policies - returns must be received in pristine condition within 30 days of ordering and a 20% restock fee applies, which with shipping leaves very little time to initiate a return. They also state that any used, misused or improperly cared for products will not be accepted even if defective with a strict policy that:

Use of product after receipt constitutes as acceptance of the product in their present state as received, and will render the sale as-is and final.

Unfortunately, arguments with customers over usage or damage are very common and returns difficult to receive smoothly.

WHERE TO BUY CHENESS CUTLERY

Due to their low margins, in 2011 Cheness Cutlery ceased their wholesale supply operation and the only other place where they can be purchased outside of Cheness themselves is right HERE at the Store of our sister site, Sword-Buyers-Guide.com 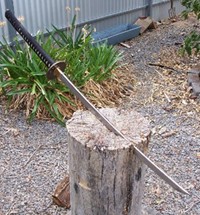 Requested by members of the Bujinkan Federation, this 9260 spring steel sword has a short blade with long handle in a normal length saya and is considered by many experts to be what a Ninja sword may have REALLY been like.

On its own merits, it is a versatile and very durable cutter and we push it to the limits in this destructive review. $249.99

Handles surprisingly well, the 9260 blade on this one is tough enough to chop into a steel barrel. $299.99

Tough as nails, the workhorse flagship of the Cheness 9260 Spring Steel line $279.99

The Tatami Mat Killer that has stood the test of time. $299