When it comes to the Excalibur Sword, most people think of one classic design defined by the 1981 movie. Several sword makers have made replicas of this sword - but few have been readily available. Buy finally, there is an option in the mid level price range that you could buy today. At least, while the limited edition run still has some swords left to go.

While they are getting towards the end of the run, before you jump on the bandwagon, best to take enough time out to read the following review of the Darksword Armory Excalibur Sword and decide for yourself if it is for you.

"Behold; The Sword Of Power, Excalibur!" 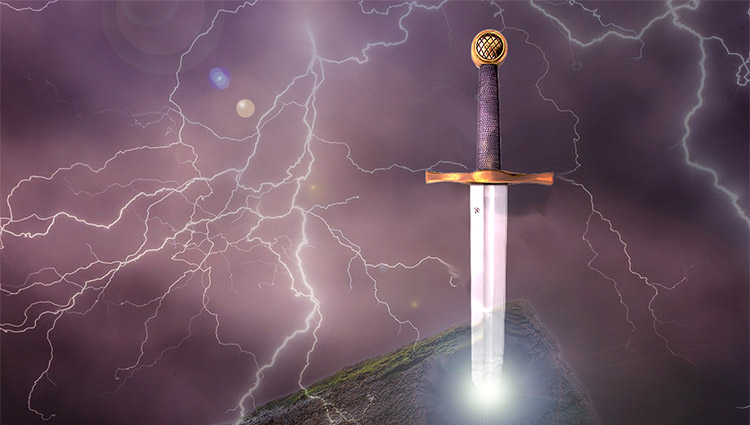 When John Boorman's epic film came out in 1981, I was 8 years old. It was instantly one of my favorite movies. Excalibur was one of the first "swords" I ever saw, second only to the Mind-Sword and Voltan's sword, both from the film Hawk The Slayer. When I saw Excalibur, I vowed to somehow, someday have one for myself.

32 years later and 2 years into collecting, I decided to get a new sword as a 40th birthday gift to myself. I was able to spend a little more than usual, so I rolled the dice and ordered DSA's limited edition Excalibur. So, without further delay,

"This is Excalibur! Sword of Kings from the dawn of time." 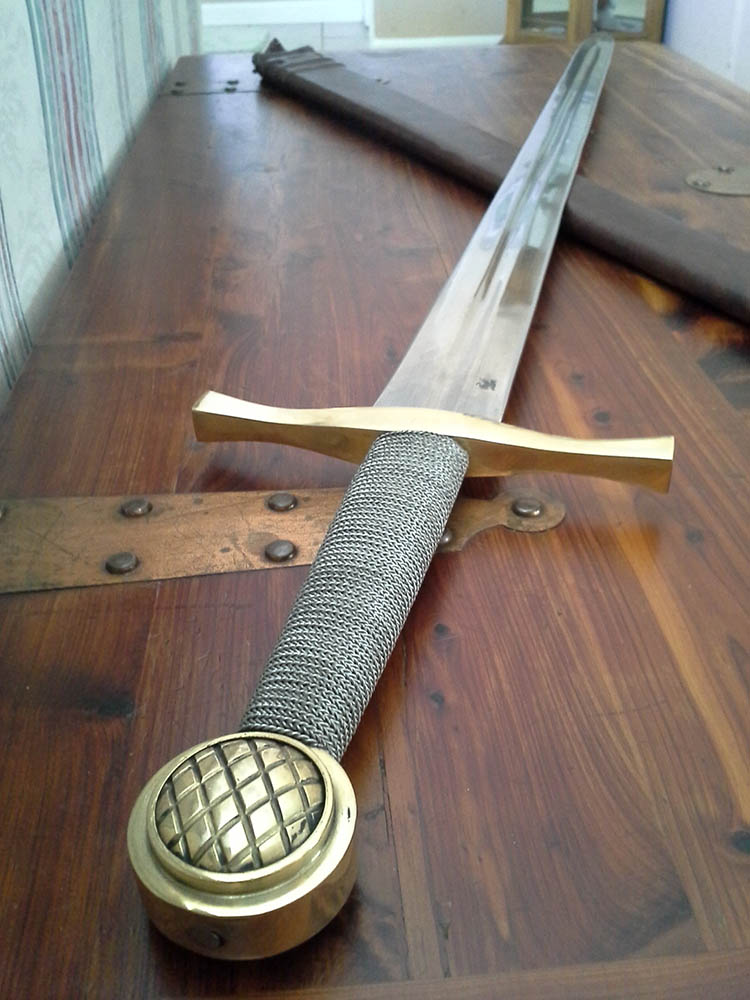 "Forged when the world was young, and bird and beast and flower were one with man, and death was but a dream."

As a movie replica, the historical value of this piece would be N/A. It has the imposing yet graceful look of your typical cruciform medieval sword, yet ornate enough to be worthy of King Arthur himself.

I've heard some questions raised as to whether or not DSA's design is a copy of the Albion Discerner. I don't really see it that way, as the Discerner is based on the heirloom sword of the Scottish Lindsay family. DSA has stated from the beginning that their Excalibur Sword design was inspired by the sword from John Boorman's film, yet the sword from the film appears to be based on the Lindsay sword.

Some history on the Lindsay sword here at Kult of Athena where I purchased the DSA Excalibur Sword from:

"The original was passed down through the generations from it's believed forging in 1072 until it was buried with a family member in 1683. Before this time a painting of the sword was commissioned, and that painting was then handed down in it's place. An interesting feature of this sword is that is appears to be the inspiration of the famous Excalibur sword depicted in the 1981 film of the same name. Though no one is sure how or when the designers of the film had come across a picture of the painting then in a private collection."

As usual, KOA's packaging was excellent. The sword was secured in a wooden display box, which was inside a cardboard box from DSA. KOA packed it in ANOTHER box, with enough packing material to keep it safe for it's journey to me in CA.

When I finally got it unpacked, I was blown away by the aesthetic quality of this sword. Absolutely GORGEOUS. When I first held it however, I did notice the weight of it. It's a heavier sword than I'm accustomed to without a doubt. Nevertheless, I immediately began to eyeball my stash of milk jugs with malevolent intent... P-)

These stats are the weights & measures of my sword, and are not from the maker's or vendor's website. 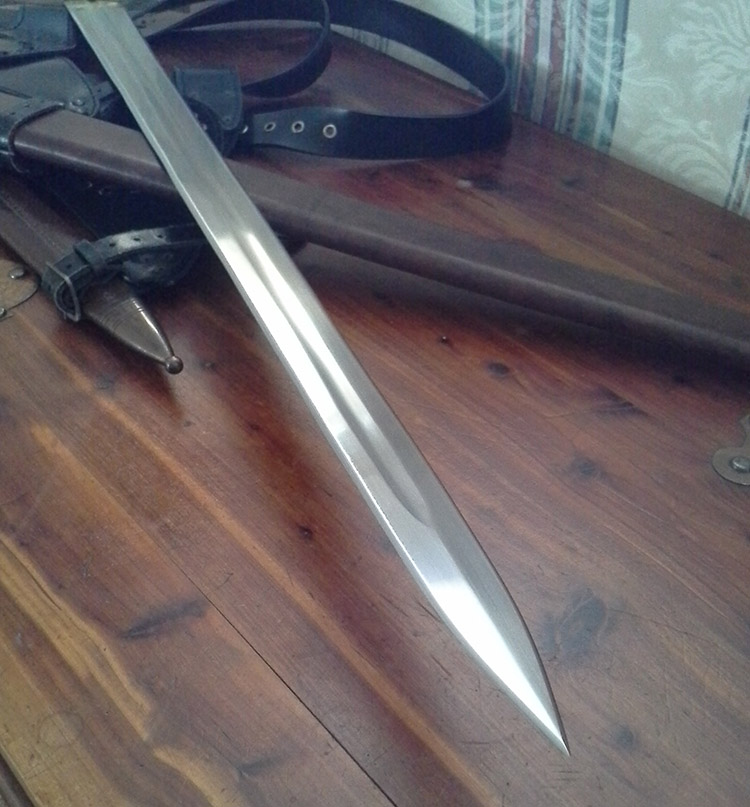 As a fantasy sword, I don't see this fitting into Oakeshott typology. I see some aspects of at least 3 different types. It has the width of blade and long fuller of a Type X, the profile taper of a XIIIa, yet the point is closer to that of a Type XII, but with a diamond cross section.

Width of Blade and Long Fuller of a Type X

Profile Taper of a Type XIIIa

And a point closer to a XII

This is where the sword could use some improvement. It's a thick blade; with very little distal taper, and it's heavy. The level of polish is good, but the fullers on both sides of the blade are slightly off center, just a hair to the right.

Click here to learn several methods on how to sharpen a sword, either by hand or belt sander

Now I've heard from many that DSA swords are of notoriously hard steel, and can be very difficult to sharpen. With that in mind I opted for KOA to sharpen it from blunt, just to get it started for me.

The edge was a secondary bevel, a little better than the Iberia line Hanwei Hand & a Half I used to have. I was expecting this, and from there I used a Harbor Freight 1x30 belt sander to convert the supplied edge to an appleseed. 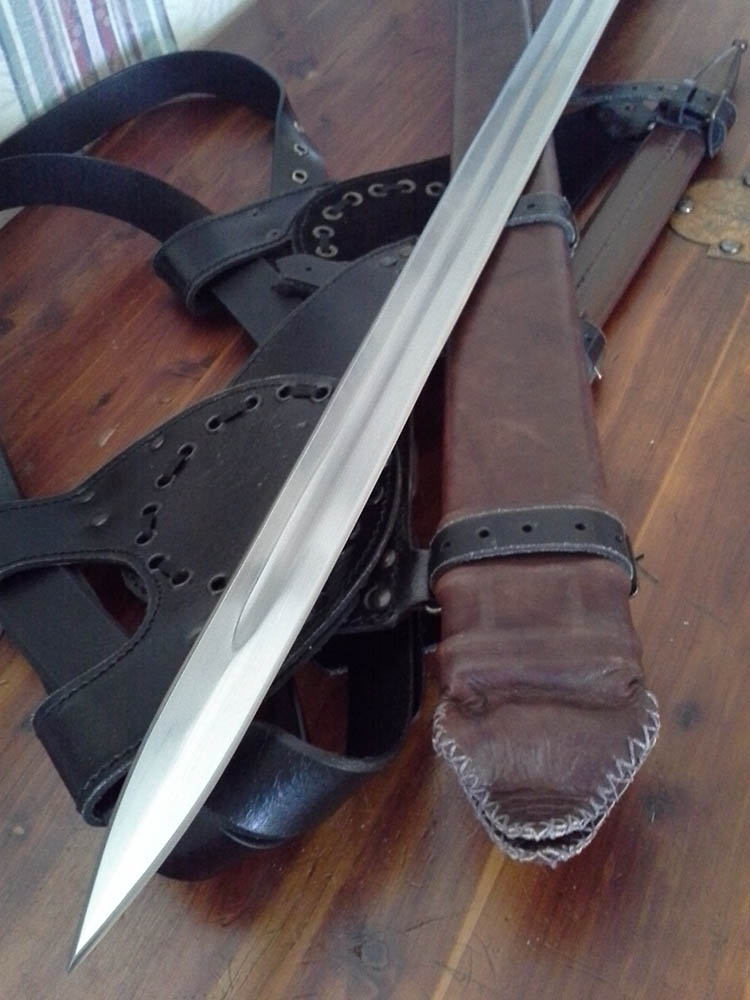 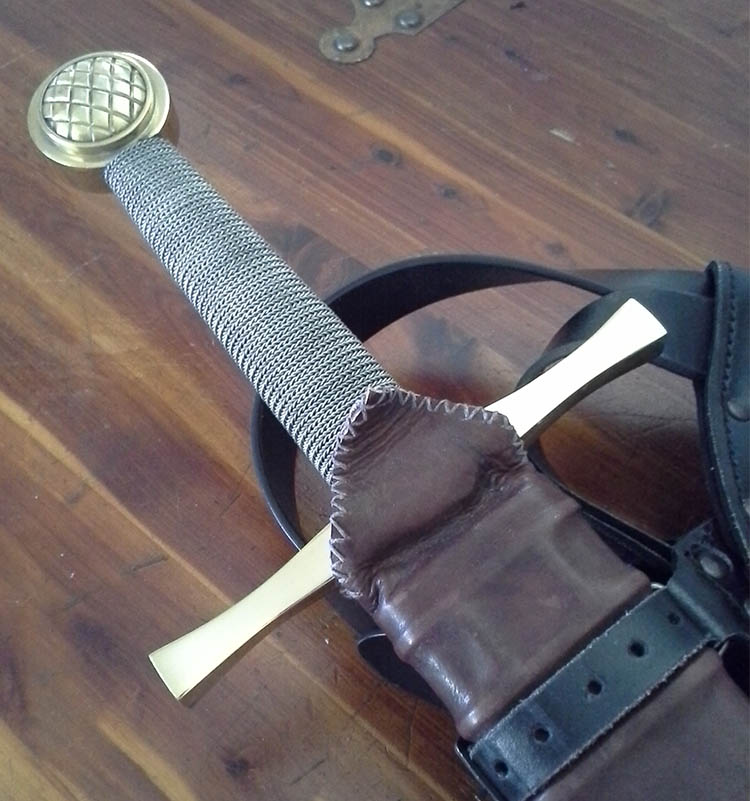 This is where the sword really stands out for me. I've always loved the look of a wire-wrapped grip (probably because of the film's sword being one of the first swords I ever saw), and this one was done BEAUTIFULLY. Occasionally I can feel one strand of the wire near the top of the grip shift ever so slightly. I don't see this as an issue, as the movement is of the slightest bit, and does not occur every time I hold it.

The solid brass cross and pommel look near spot-on to the movie sword, and are straight and lined up well. The gap between the guard recess and the flat of the blade is little wider on one side as opposed to the other, but the variance is not bad. Overall, a gorgeous hilt in my opinion.

My only gripe is the fact that the sword is listed as peened, when actually...

How are our pommels peened? It is, in fact, a combination of threading and peening as somebody else mentioned.......what we do is we thread the end of the tang, put a washer, then a bolt to secure the handle, and then we screw the pommel and peen it over. 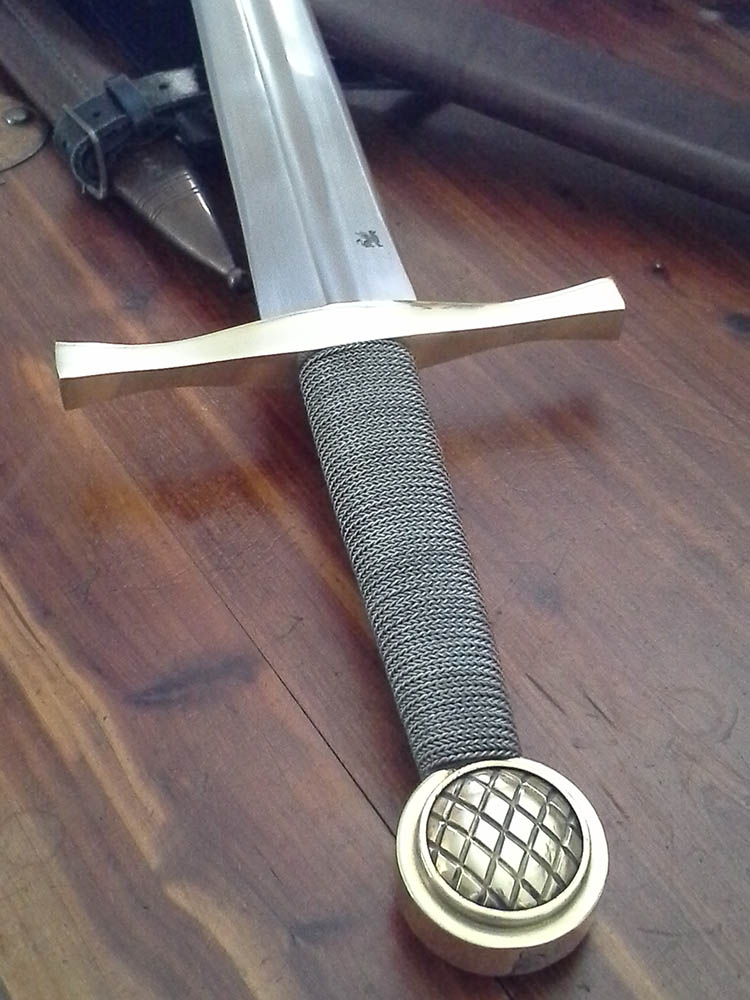 The scabbard is well done. The sword WILL come out if held upsidedown, but it's not terribly loose either. The leather is a rich dark brown with subtle black swirls. The back stitching is nice and clean, and appears to be good and tight. The riser at the throat looks good, and fits my cheap-o scabbard mount perfectly. I like the look of the rain-guard flaps as well. 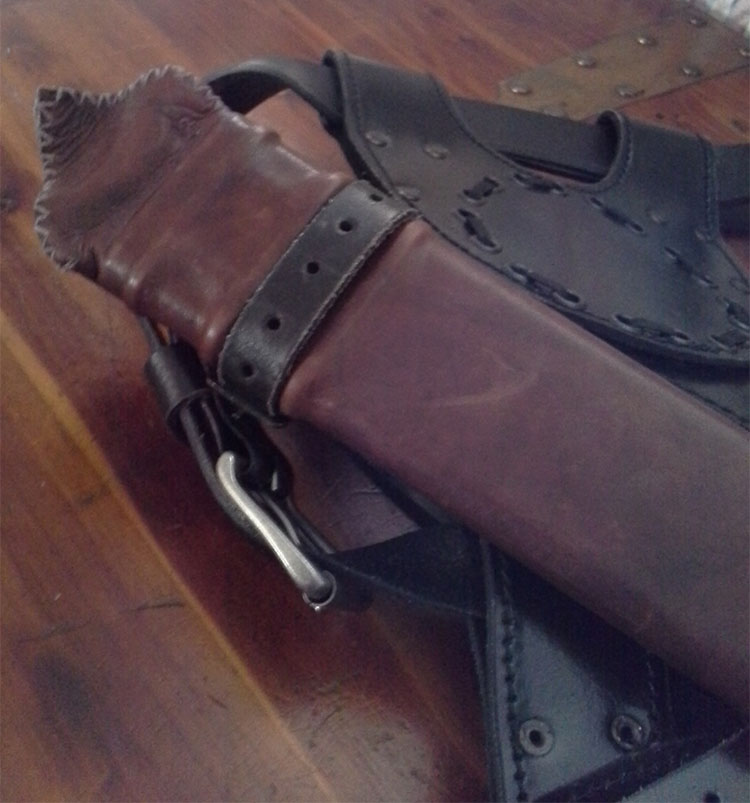 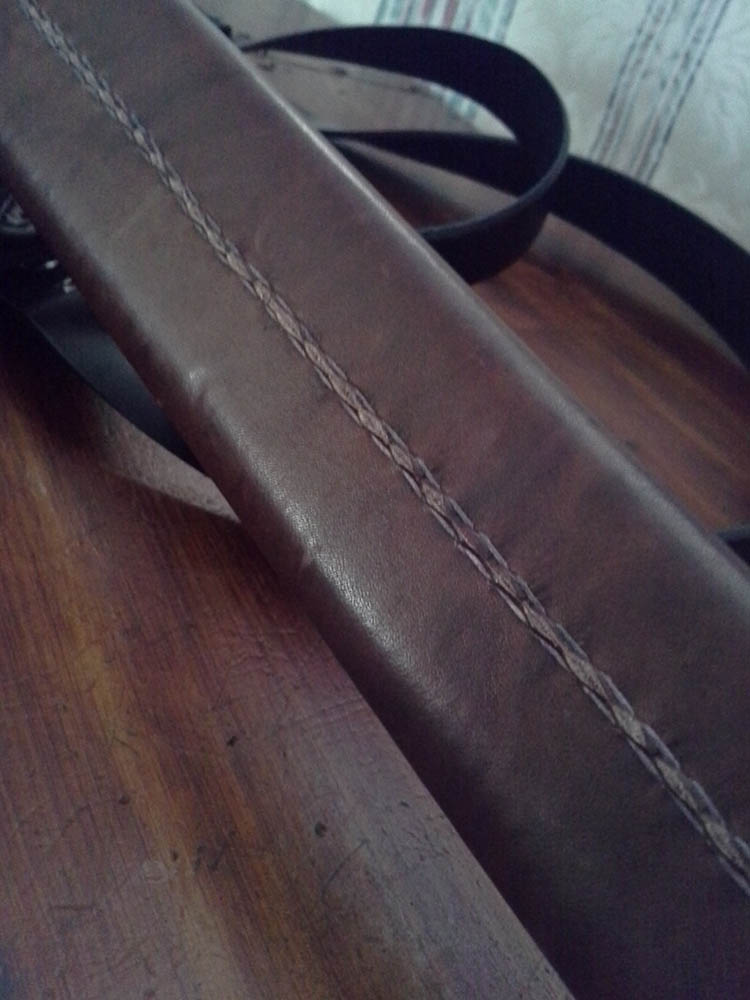 Despite having a grip length of just under six inches, this is a two-handed sword by all means. At just under four pounds, two hands must be used to be able to effectively wield it. Point control was good, better than I expected. After handling the Excalibur for a while, I picked up my Hanwei Tinker Early Medieval Sword to compare. The Hanwei Tinker felt MUCH lighter and faster...

Excalibur...I Call On Your Power!

Despite it's heavier weight, the sword was easier to cut with than I expected. It's slower than my Hanwei Tinker by far, but it's not as sluggish as I would've thought. Once it gets moving, it does move with authority.

This would be the perfect sword for me if it were a pound lighter and if it had a traditionally peened hilt assembly. That aside, it's a beautiful interpretation of a legendary movie sword, one to proudly display or wield against those pesky milk jugs. Just pray that their numbers are small, as a battle of any length would surely render the wielder spent... ;)

If you're looking for a functional version of the Excalibur sword from John Boorman's movie, this is one to consider. The weight should be kept in mind if you plan to regularly cut with it, as this sword is heavy. It's a great display/conversation piece that can be used for some backyard fun as well. As heavy as it is, I'm still glad I got it. Your mileage may vary...

Jason bought the upgraded version of the DSA Excalibur Sword with the interlaced sword belt HERE at Kult of Athena for $625.00 + $30 sharpening service and $40 shipping for a grand total of $695.

This was a great choice, and is the only choice for non North American customers, however we also have a special deal on the DSA Excalibur sword, selling it right HERE at the SBG Sword Store for $645 with FREE sharpening service and FREE Shipping in North America.